Be careful what you wish for… you just might get it

I hesitate to write about fluke again, but given the woefully inadequate press on the issue, and the current focus by politicians, who clearly aren’t getting the whole story, I think it’s important anglers understand the situation, and what’s at stake here.

Let me reiterate, the summer flounder (fluke) stock IS NOT doing well. Six years of poor recruitment (aka poor spawning success) has driven the stock down to the point that if we continue to fish at this level, we will have real problems in the not-so-distant future. 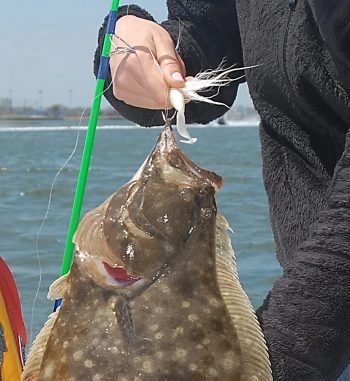 Above: fluke up close. Top: fluke on deck. Photos by John McMurray.

As I’ve mentioned in other posts here, the last good spawning success was in 2009. Yes, guys are still catching those larger, pre-2010, fish (generally on the ocean side in 40-plus foot of water). And yes, such fish do indeed appear to be somewhat abundant, particularly in some geographically isolated areas (e.g. Eastern Long Island).

Those catches are likely what’s showing up in the recreational fishing surveys, which indicated we went over our allotted quota last year (some states, particularly New York and Connecticut, by a lot).

I won’t deny that it is entirely possible, maybe even likely, that such recreational fishing surveys could have overestimated catches, especially if you compare them to last year. I mean, if surveyors intercepted enough of those anglers fishing a bit offshore, once such data is extrapolated I can certainly see how it might indicate wide-ranging high catches in a state, when anecdotally, effort and catch seems to be a lot more isolated. Will circle back to this shorty.

The overarching point here, at least for now, is that the stock is depleted. Ask just about any angler who fishes the inside, the bays, etc., and they will tell you straight up, there ARE NOT many fish around, and that most traditionally good fluke spots have not been productive in the last few years.

This is not just anecdotal, nor is it a case of bad (aka “flawed”) data. There are thirteen different fisheries-independent surveys that show the same recruitment problem with summer flounder.

Absolutely, there are plenty of people who want to believe that the stock is doing fine, simply because they may have had a good season in the isolated area they fish.

Let’s be clear though. It isn’t… 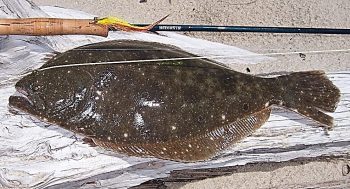 At current fishing levels, we are definitively “overfishing” summer flounder. In other words, we are taking out fish at a much higher rate than they can be replaced. All the existing science shows this to be the case.

Despite all the claims of “outdated” assessments, there was a stock assessment update just last year.

It indicated that fishing mortality was about 26% higher than it needed to be to maintain the stock at a level that wouldn’t cause it to become overfished.

An important caveat here though is that the stock is not yet “overfished.” In other words, it hasn’t yet fallen to a scientifically determined level that requires it to be “rebuilt.”

However… It’s almost a certainty that it will fall below that level if we continue to fish at the intensity we’re fishing, which is exactly what some in the recreational fishing industry (mostly in New Jersey, but certainly in New York as well) seem to be suggesting. Specifically, they want status quo measures until some new, better stock assessment can be completed, which MIGHT (emphasis added) allow them to kill more fish.

So, just to be clear, if we maintain status quo it is almost a certainty we will dip below the spawning stock biomass threshold, and the stock could be designated “overfished” as early the end of this year! And if (or maybe more appropriately “when”) that happens, we won’t be looking at a 30 to 40% reduction in fluke quota… It’ll be more like 70 to 80%! And that is no joke…

I think if a lot of people actually knew this, they probably wouldn’t be pushing so hard for status quo.

And as far as a new assessment goes, there’s one being considered for 2018, but it’s uncertain whether NOAA will prioritize it. Regardless, I’m still not clear how or rather “if” any new modeling approach used in a new benchmark could somehow negate six years of poor recruitment.

I mean, come on man. If there are less fish around, we simply can’t keep fishing them at the same level than when there were a lot around… not if we want a robust fluke fishery in the future. That seems pretty damn obvious to me.

Option 5, More Coastwide Consistency, offers a near coastwide one‐inch size limit increase and bag limit reduction to four fish. Sure there are some states who won’t like that, but it still seems to offer the longest seasons and what I believe are reasonable size and bag limits across the board.

In New York, it would allow a 128-day season and a three fish bag with a 19″ size limit. Although this option does achieve an approximate 30% reduction, it falls short of the 41% reduction required, thus I’m not sure NOAA would go along with it.

That option supports the biological conclusion that a 30% reduction is needed, yet it doesn’t really address the 2016 overage.

That may be acceptable as there not only appears to be a great deal of uncertainly with the catch estimates amongst managers and stakeholders, but there are some recent retrospective issues with the recreational survey that may negate the 10% anyway. I mean, whether we went over target or not, I dunno. But the years of poor recruitment are there, almost undoubtedly.

I suppose we’ll see what happens after next week.

Right now though, doing nothing (aka status quo until we wait for some time and outcome-uncertain stock assessment) just isn’t acceptable.

While we’re waiting, it’s more than likely the stock becomes “overfished,” and we’ll all be looking at a 70% to 80% reduction down the road, because we’d ultimately be fishing under a fishery management council-mandated rebuilding plan. And that would really suck!

But aside from all that, for the stock and the long term sustainability of the fishery, not to mention the general fishing public who depends on an abundant summer flounder resource to be successful, making such a harvest cut right now is just the right thing to do.

It’s time to put the big-boy pants on and just do it.

18 comments on “The Straight Dope on Fluke”