Why Laws, Not Politicians, Should Be Managing Fish

A few weeks ago, I wrote about the worsening summer founder situation. For some background check it out: “THE HARD TRUTH ON SUMMER FLOUNDER”.

That “truth” of course is that summer founder, despite being managed fairly conservatively over the last decade, have had below-average spawning success (aka “poor recruitment”) for a good 6 years. In other words, the fish that we are killing now under the current regulations aren’t being replaced. So it only stands to reason, we can’t continue to kill as many without overfishing. It’s a real bummer, but it is what is it.

Since then, I sat through what was probably one of the most difficult fishery management council meetings I’ve ever had to attend. Well over a dozen stakeholders got up and gave testimony about how the inevitable tightening regulations would cause enormous economic harm to dependent businesses.

It was hard to listen to, because undoubtedly, there will be impact, but there wasn’t much the Mid-Atlantic Council could do. Because, the 30% cut in recreational landings – and what will likely be 40% in Connecticut, New York and New Jersey – needs to happen if we want to avoid “overfishing” and what will inevitably become an “overfished” stock.

Yes, there are people who believe we can continue to fish at a constant, but by all objective indications unsustainable, level and the stock will be fine, but science is pretty clear if we want a robust summer flounder (aka fluke) fishery into the future, there’s no way around it, we’ve gotta bite the bullet. 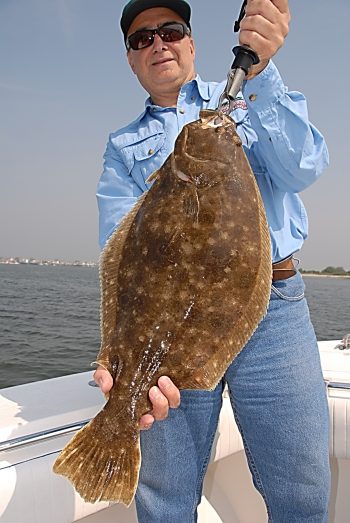 Photos: no one is mentioning the six years of poor recruitment with fluke, which puts managers in a tough spot. Photos by John McMurray.

Still, there was and is the predictable denial… “The science is bad, there are plenty of fish around etc.,” when I’m pretty certain there aren’t. And since that council meeting there has been a barrage of press about the “unreasonable” cuts that reflect such sentiment. And predictably, the politicians have gotten involved too.

What’s unsettling about the recent press and statements by politicians, as demonstrated by the above links, is that neither seem to discuss or even mention the underlying reason that necessitates the cuts – um, the 6 years of poor recruitment? How could such an important detail be left out? And what about the risk of overfishing? And consideration of future abundance?

Surely there would at least be a general understanding that such tradeoffs exist? So it’s hard for me to believe that such omissions aren’t intentional, and maybe in some cases an effort to mislead the general fishing public, and incite that sort of knee-jerk anti-regulation/anti-conservation reaction, despite such reductions being in the best interests of the general public in the long term.

I mean, come on man. Wherever you might stand on this issue, at the very least I’d expect some acknowledgment that the public needs the whole story.

Clearly the politicians are listening to, and trying to represent, those specific vocal stakeholder groups who benefit, in the short term, from what every piece of science is saying is an unsustainable harvest level.

But what about the rest of us who might benefit from the continued precautionary management and future abundance and sustainability of the summer flounder stock? Who’s representing us?

Plenty of us out there on the water have seen a precipitous decline in fluke over the last few years. Sure, one can still catch keepers in certain places, at certain times of the year, usually offshore a bit. But frankly, in the bays, it’s just been bad here. So the science makes sense to a lot of us. There aren’t near as many fish around as there once were. Thus we should be killing less. Some of us get that we need to do this if we are going to have a few fish around in the future. For ourselves, for our kids. We understand the need for conservation, even if it means some pain in the short term.

But you likely won’t hear any politicians advocating for us. Because for one, conservation and long-term abundance and sustainability doesn’t make as good of a sound bite as the hard-working fisherman unable to fish down a stock like it used to be able to. But also because, for the most part, guys like us don’t show up to meetings or make regular visits to congressional offices. It’s generally the larger scale extractive users, who benefit by killing more fish now, who are the ones who do this kind of thing on a regular basis. That needs to change, and perhaps someday it will.

For now though, a conservative federal fisheries law, the Magnuson-Stevens act, protects the general public – and we have to remember that this is a public resource – from those political influences who would seek to allow overfishing, and sacrifice future abundance at the expense of the rest of the fishing public.

As we know, however, those same political influences can work to change the law so that we aren’t protected, so that it caters to special interests at everyone else’s expense, and in the end screws the general public.

And we can’t let that happen.

With continued controversy over species like summer flounder, black seabass, red snapper etc., the perfect storm is brewing. While councils continue to struggle with the management of such stocks, we have to remember that while there may have been some economic pain with the 1996 revisions to the Magnuson-Stevens Act, and the 2007 reauthorization, it has resulted in the rebuilding of over 40 stocks that were previously overfished. And while you don’t hear much about that, it is an extraordinary success story.

To roll back the law’s conservation provisions now would be a mistake.

In the near future we can expect that there will be a big push to weaken the conservation and science-based provisions of the Magnuson-Stevens Act, and we need to be ready for it.

5 comments on “The Politics of Short-Term Profit vs. Long-Term Sustainability”