The Latest from Capitol Hill

With the 117th Congress in the rearview mirror, check out the Network’s final 2022 View From The Hill update for a look back at the significant actions that Congress took on oceans and fisheries policy this year.

More from the 117th Congress:

Before releasing this bill, Chairman Huffman conducted a nationwide listening tour to hear about the issues facing communities and businesses that depend on healthy fisheries. The Network applauds Chairman Huffman’s leadership and the broad stakeholder engagement behind this bill and looks forward to working with him and and the wider community as MSA reauthorization progresses in the 117th Congress.

Introduced by Rep. Chellie Pingree (D-ME), with cosponsor Rep. Rob Wittman (R-VA), the Keep America’s Waterfronts Working Act (H.R. 3160) would establish a $12 million Working Waterfront Grant Program to help preserve and expand access to coastal waters for businesses that depend on them.

The bill would also create a five-year pilot program for a $12 million loan fund for waterfront preservation and establish a task force at the Department of Commerce to identify critical needs for working waterfronts and address the impacts of a changing climate. Read the Network’s statement thanking Reps Pingree and Wittman and urging the 117th Congress to support this bill through to final passage.

Signed into law on January 5, 2021, the Act will help the next generation of commercial fishermen by enacting a national grant program to support initiatives to educate, train, and mentor young and beginner fishermen around the country. Read the Network’s statement applauding the law.

The Magnuson-Stevens Act: A Bipartisan Tradition 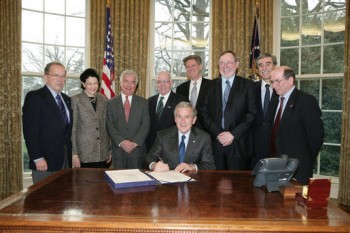 Through the past two reauthorizations of the Magnuson-Stevens Fishery Conservation and Management Act in 1996 and 2006, Republicans and Democrats have agreed that conserving America’s oceans and fish populations make good economic and environmental sense. With the Magnuson-Stevens Act now up for reauthorization, Congress should continue this tradition of bipartisan support for our primary federal fisheries law and preserve its legacy of success.

Since Congress incorporated scientific mandates and strengthened the conservation measures in this law in 1996, two-thirds of overfished stocks have been rebuilt or are making improvements. According to NOAA Fisheries, rebuilding all U.S. fish populations would lead to a $31 billion increase in annual sales and support half a million new U.S. jobs.

“This landmark legislation was originally sponsored by several great friends of Alaska — Senator Magnuson, our own Senator Ted Stevens, and Senator Inouye — and co-sponsored by several Republican and Democratic members of the Committee. It represented a truly bipartisan effort to carefully manage one of America’s greatest assets, our fisheries.”
Sen. Mark Begich (D-AK), 2011

The following Congressional committees are responsible for the reauthorization of the Magnuson-Stevens Fishery Conservation and Management Act.

Tell Congress that abundant U.S. ocean fisheries are important to you.