“Bycatch” describes marine life that fishermen incidentally catch while harvesting a target species. They then discard the unwanted catch (often dead of dying). Bycatch continues to be a persistent problem in fisheries across the United States. It is more than just waste—bycatch can have significant ecological, social, and economic consequences as well.

In federal fisheries, bycatch often comprises species that fall outside of regional fishery management councils’ management plans or authority. Forage fish and marine protected species (e.g., marine mammals, seabirds, and sea turtles) are often bycatch. In many cases, bycatch in one fishery is a target species in another. In these instances, bycatch can directly limit harvest opportunities for another directed fishery and destabilize communities that depend on fishing.

Currently, National Standard 9 (NS 9) requires that managers minimize bycatch to the “extent practicable.” The qualifying language for this requirement is broad, leaving a high degree of discretion and subjectivity in reducing bycatch. 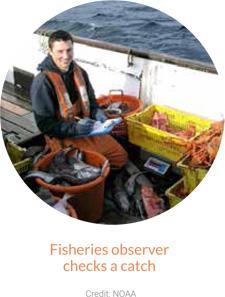 For example, the North Pacific Fishery Management Council (NPFMC) struggled with determining the “practicability” of deep cuts to halibut bycatch, ultimately choosing smaller reductions than those offered by Alaskan officials and requested by coastal residents. The NPFMC reasoned that only small reductions of bycatch were practicable because anything greater would go beyond historic levels of bycatch and would cause economic harm to the groundfish fishery.i In doing so, the NPFMC effectively allowed the groundfish fishery to define “practicable” by what it considered to be achievable.

Bycatch (and mortality) rates are often determined by the gear fishermen use and how they use it. Lower bycatch rates can be achieved with gear and fishing techniques that better discriminate between target and non-target species, or release bycatch with low levels of mortality. Fisheries using indiscriminate gear have higher rates of bycatch and mortality, thereby producing significant ecological and management costs compared to more selective ways of fishing. Fishermen are often reluctant to switch gear or fishing techniques, however, because of the associated cost and effort, among other factors.

Accountability and reporting guidelines for bycatch vary from fishery to fishery, and many fisheries suffer from unobserved bycatch rates and poor bycatch data, which leads to significant uncertainty in stock assessments.

In its reauthorization, the MSA must implement concrete steps to reduce bycatch and to prioritize and promote directed fisheries over bycatch uses. Congress must also improve monitoring and transparency of bycatch in all fisheries. Bycatch reductions should promote ecosystem health, protect historic directed fisheries and provide socioeconomic opportunity for fishery dependent communities.

Recommendations and Actions for Reauthorization 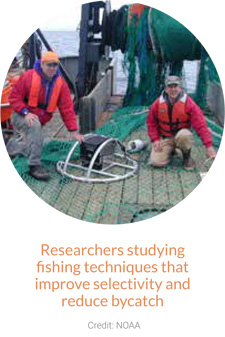 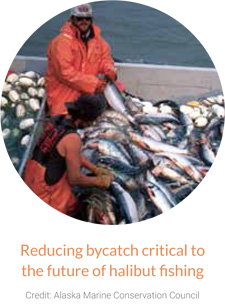 The groundfish fishery in the Bering Sea and Aleutian Islands is allowed to discard around 7.7 million pounds of halibut annually in the pursuit of other species.1 Like most fisheries, managers control halibut bycatch through a fixed limit (i.e., bycatch levels do not change relative to the health or abundance of the halibut stock). Because these levels remain static at times of low abundance, this policy actually increases bycatch rates as the halibut population decreases. This disconnect between management measures and the health of halibut stocks makes it difficult for the species to rebound from low levels. Additionally, nearly 40 percent of the halibut discards in the groundfish fishery are juveniles.2These young fish migrate throughout the North Pacific, playing an important ecological role as prey for other species and serving as food and a source of income for humans as well. Fishermen who take these juveniles as bycatch disrupt this migration. In turn, halibut fishermen and food webs that depend on halibut suffer.

Halibut bycatch also has social and economic consequences. Bycatch in the Bering Sea has accounted for 77 percent of all halibut removals in recent years, by far the biggest impact on this species.3 For commercial, recreational, and subsistence fishermen who rely on halibut as their target fishery, this has led to dramatic reductions in harvest opportunities.4 Such reductions negatively impact coastal communities that depend on the fishery for sustenance and livelihood.