Despite What Some Are Saying, We Have To Do Something with Fluke

Over the years, I’ve written a lot about summer flounder… mostly using it as an example of how the conservation provisions of federal fisheries managed law (AKA the Magnuson Stevens Act – MSA) have worked to rebuild stocks… and subsequently provided access to way many more people than a depleted stock would have. I even testified before Congress back in 2013 to that effect…

Because it was absolutely true. The 1996 and 2006 revisions of MSA, along with a lawsuit in 2000, essentially forced managers to bite the bullet and curb fishing enough to bring the stock back to levels people hadn’t seen in decades.

From my own perspective, as a fisherman, charter captain, small business owner, and a father of two young kids, it was a windfall.

There were enough fish around that I didn’t need to run to 60′ of water and fish with 8 ounces of weight to hold bottom. I could run “light-tackle” charters, bucktail these fish, even fly-fish for ’em. More importantly, I could take my then 4-year-old twins out in the middle of the afternoon, with the reasonable expectation of encountering a keeper or two. And of course so could everyone else.

In short, we had a fully rebuilt fishery and the majority of anglers had greatly increased access to those fish. Fluke was, to me, the embodiment of a successful management story. 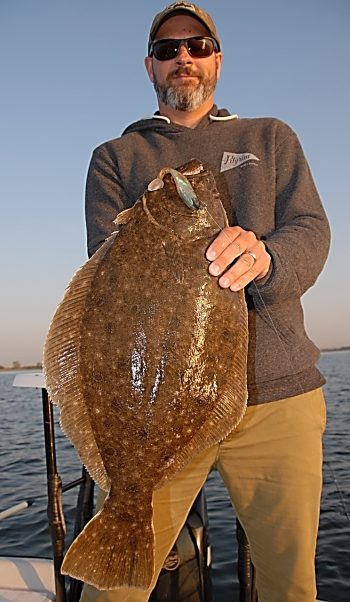 Top: The best fluke fishing is mostly in the ocean. Above: Fluke like this are few and far between in the bays. Photos by John McMurray.

That is no longer the case.

Most fluke anglers began to see the number of accessible fish (in the Bay and nearshore) decline beginning around 2014. Things didn’t get better after that, they got worse… And the science showed us why.

Fluke weren’t recruiting (spawning and surviving) like they had been. In fact, due to reasons scientists can’t quite put their finger on, summer founder suffered poor recruitment from 2010 on.

In other words, the number of fluke in the water has been declining for quite some time, and it doesn’t appear to be attributable to fishing.

Why the poor recruitment?

There could be some source of undetectable mortality. Given the scale of prior violations (e.g. the fairly recent Research Set-Aside enforcement actions… note, these are the guys who actually got caught), I suppose it’s not unreasonable to believe it could be due to large-scale illegal fishing mortality. But there’s also some evidence that summer flounder’s recruitment issues could be due to climate change/warming waters/acidification. Man, I don’t even want to think about that.

Really though, we just don’t know. Recruitment could, and I think will, get better at some point. I certainly hope that it does. But it’s just common sense that we can’t just continue to fish at the same levels that we were when there were more fish around. More on this later…

So where are we now?

Well, summer flounder was recruiting well in 2008 and 2009, before the downturn. While those pre-2010 year classes have been somewhat fished down, they are still around, and some areas, such as Montauk, saw good numbers of them last season.

But here’s the thing with those fish… Generally, a stock, when it becomes depleted, it tends to concentrate in pretty specific areas. In other words, while we don’t have that same sort of wide ranging abundance we were seeing a few years ago in the bays, etc, there are still fish around. A good amount of them are in some pretty specific water depths/areas.

People are finding and hitting those fish pretty hard. And that’s a problem. 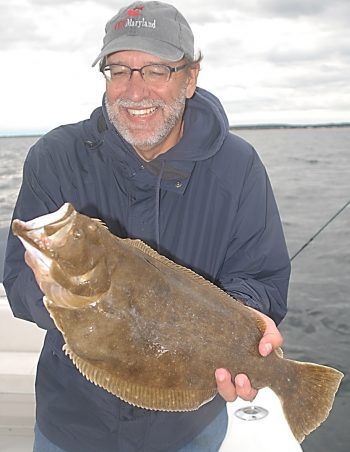 Given all the poor recruitment with summer flounder (aka less fish in the water), NOAA Fisheries wants us, actually requires us, to kill less fish, so that it doesn’t become an “overfished” stock. That makes sense right?

Yes, you might still have some good concentrations of those 2008s and 2009s but very little after that. If we’re thinking at all about the future of that fishery, knocking the crap out of those fish probably isn’t a good idea.

There’s a disconnect with some anglers though, some of it fueled by those in the fishing press and elsewhere, who believe that because they are still catching these fish, the science is bad and there are indeed still plenty of fish around. Will get to that in a minute…

But let me be clear that, there have to be some cutbacks. Not only are they required by law, it’s the right thing to do, on a number of levels. If there aren’t cutbacks, not only are we jeopardizing the future of that fishery, it’s almost a certainty that the stock will become “overfished,” and by law, we’d need to “rebuild.” That would likely mean even more drastic cutbacks that we are facing now.

While we didn’t see it on the water, there were actually cutbacks mandated for the 2016 year.

At first the Mid Atlantic Fishery Management Council’s Science and Statistical Committee (SSC) was recommending a whopping 43% reduction. But at the urging of Council leadership, the SSC determined that a 30% reduction spread out over a few years would still prevent overfishing.

That said, the surveys they used to determine recreational catch showed fairly low effort in 2015. So because we weren’t catching as many fish, we didn’t really have to implement any constraining regulations in 2016.

Afraid that wasn’t the case for 2016. Initial survey results are showing A LOT of effort, particularly in states like Connecticut and New York, and it looks like we caught a lot more fish than we were supposed to. When you couple those overages with the fact that in the meantime, scientists discovered another two years of poor recruitment and were recommending another 30% cut, the scale of the reductions becomes pretty significant.

Now whether or not 2015/2016 surveys reflected what was really happening on the water, I dunno. Folks could argue about that all day. But I find it very believable that people are still finding and directing on all those 2008s and 2009s. You can go on most recreational fishing websites, or pick up one of the print publications to see that this is probably true. I mean, anglers seemed to have caught a lot of fluke this year.

Of course, again, that sorta thing elicits the usual response that, “there are plenty of fish around,” “the science is flawed,” etc. But, well, I really don’t think it is. From my perspective, and certainly plenty, probably the majority of others, there aren’t near as many fish around as there were in, say, 2012. Sure, if you caught a lotta fish in your particular areas this year, that may not seem true, but If you look at things from a broader level, well, the fluke fishing has been pretty bad.

So, because all that poor recruitment, and because there was an overage in many states in 2016, we’re now looking at what will likely be a catastrophic reduction in recreational catch next year.

States like Connecticut, New York and New Jersey could very possibly see something close to 40%. And that will be painful for a lot of folks.

But we have to understand why. By all scientific, and most anecdotal indications, the stock is not doing great. Yes, there are still some 2008 and 2009 fish around, but there aren’t enough younger fish to replace them. And that’s serious if we want some fish to be around a few years from now.

Without a doubt we will hear, and we currently are hearing about the economic impacts such a reduction might have. But if we flaunt a well-intentioned and arguably well-designed law that more-or-less forces managers to make the tough decisions that ensure the stocks viability into the future – so that we can kill more fish now – we’ll probably end up in a pretty bad place with these fish.

Regardless, the feds would get sued if they bowed to public pressure and tried.

There are actually few in the management community who would argue that summer flounder isn’t in a precarious situation right now, although there are one or two unfortunately. Still, such managers are absolutely working hard to try to find solutions here that address some of the economic impacts that are likely to result from circumstances such as this.

The Council is currently working on a Comprehensive Summer Flounder Amendment, which will address a range of issues in the summer flounder fishery. Presumably, alternative management measures, which could possibly smooth out such drastic reductions will be analyzed during the development of this action.

But we have to understand that such alternative management, like slot limits, managing based on a constant mortality rate, etc. come with their own set of tradeoffs, and likely more risk of overfishing (aka less fish in the water).

Regardless, doing such an amendment is time consuming, and right now, we are still in the development phase. We likely won’t see any real action on this for a couple of years.

For now, we really do have to take these reductions, however painful they may be, both because we are required to by law, and because it’s the right thing to do if we want fish around in the future.

As far as solutions go, there’s one thing I’m absolutely sure of. The answer isn’t in changing the law… Unless we want massive overfishing in all our fisheries. Because I’m almost certain that’s what would happen if we did what some folks are suggesting.

Taking the teeth out of the Magnuson-Stevens Act, or tweaking it so that Councils would be allowed ways around making those difficult decisions, would have reverberating negative effects, not limited to just summer flounder I’m afraid.

That would be bad. Because as I’ve said here and elsewhere many times before, without precaution, without abundance, the recreational folks, particularly the small boat, inshore fleet, or just the guy who fishes from shore, won’t have a fishery at all.

6 comments on “The Hard Truth on Summer Flounder”