An aggregation of small-mesh bottom trawls off the coast could be ruining a historically significant striper fishery. 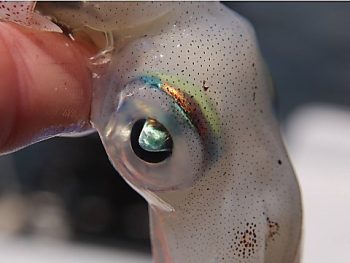 Above & Top: Loligo squid are getting wiped out off of Martha’s Vineyard & Nantucket, and they’re what brings stripers into the rips. Photos by John McMurray.

Man, I hesitate to write this, because I don’t wanna cause any more economic harm to the islands’ charter fleet, by, well, saying it publicly… but I think it’s become so obvious that most striper fishermen already know it…

The historically significant striped bass fishery that made Martha’s Vineyard (and Nantucket) the iconic fishing destination it is, just ain’t what it used to be.

Very few local guides or anglers with any history here would argue this isn’t the case… There seems to be a consensus that all those rips that used to stack up with fish from June to September don’t really produce anymore. Least not like they should. And the beaches? Well of course there are still fish caught, but the fishery appears to be a shadow of its former self. 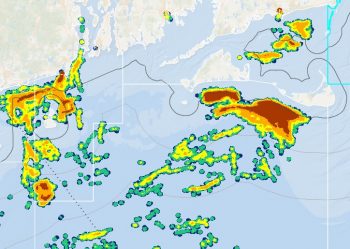 For a few years a lot of us just assumed it was related to the general decline in striped bass abundance, but let’s be honest here… the striped bass do indeed appear to be coming back, at least to some extent, with the 2011 year class starting to flood the coast. But the area around those two Islands arguably hasn’t recovered, at all.

While of course, nobody really knows for sure, a likely answer to the question can be found by simply taking a walk down to the South Shore of either island in June or July and looking out on the horizon.

Over the past few years, it’s been filled with squid trawlers, sometimes a dozen, sometimes upwards of two-dozen, trawling back and forth, mowing the lawn… not just within eyesight, but often pretty damn close to the beach.

Certainly there were trawlers that fished this area in the past, but such a dense concentration of small-mesh bottom trawls is a fairly recent occurrence.

While the squid industry disputes this point, it’s pretty well agreed upon by islanders that there are a lot more boats around these days… The available data indicates this to be the case as well.

And yes, the occurrence of such aggregation of boats happens to coincide with the downfall of the islands’ striped bass fishery.

So why are all these trawlers, all of the sudden, fishing here? Well, who the hell knows, but it’s likely a combination of new electronics (particularly the new AIS technology, now a requirement) that brought the first several following boats into what is essentially a spawning squid funnel, and the fact that they just figured out that they could fish here with minimal effort and catch a (expletive)-ton of squid. 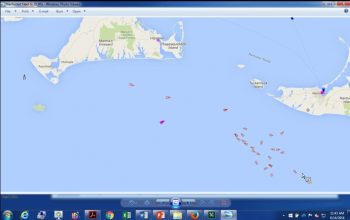 AIS shot of squid boats concentrated off of SW corner of Nantucket.

Here’s the problem though… Or rather, there are a bunch of problems…

Anyone who’s spent any time on the water surrounding the islands knows that this area is incredibly biodiverse and productive.

There are a ton of recreational and commercially important species there, particularly in the spring and summer months, either spawning or eating those squid, such as summer and winter flounder, scup, black seabass, blueback herring, and yes, striped bass…

So you can imagine with all those bottom draggers pulling mesh as small as 1 7/8 inches, in relatively close proximity to each other, that all this other stuff gets caught to, and subsequently discarded.

In fact, bycatch in the squid fishery in general is pretty significant. It’s actually around 35% of their catch. I mean that’s just crazy, man. So for every tow, more than a third of it gets discarded, presumably dead? We’re talking about hundreds of thousands of pounds of striped bass, summer flounder, black seabass.

If you want the local, on-the-water perspective of what that looks, like I suggest checking this article out: Squid trawlers leave a wake of death south of Martha’s Vineyard. 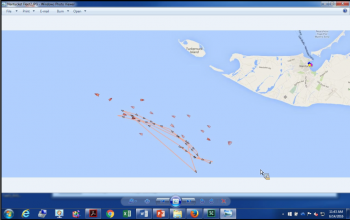 AIS shot of squid boats working off of SW corner of Nantucket.

I should also to point out that this area off the islands is an important spawning area for longfin (loligo) squid. In fact it’s considered “essential fish habitat” for that species because spawning occurs in-mass in the summer months.

Pretty self-explanatory why concentrated effort on spawning squid aggregations could be problematic down the road. But to add a layer to that, the occurrence of squid mops (egg masses which attach to the bottom) getting pulled up by these bottom trawls is pretty well documented.

Yes, there is some debate on whether or not such eggs hatch after being pulled off the bottom, or pulled out of a net and tossed back in, but common sense would tell us that most of them don’t.

Yes, I understand that squid are considered healthy right now (not overfished, and overfishing isn’t occurring), and that some argue they can sustain this kind of pressure. But well, this sort of concentrated fishing is pretty damn new, so I would argue that we just don’t know, and IMO it likely can’t.

No Squid, No Stripers

Last year alone, over 19 million pounds of loligo were taken off of Martha’s Vineyard and Nantucket in the spring and summer months. That is an astonishingly large amount of available “bait” taken out of the ecosystem.

One could certainly argue that taking such large amounts from such a small area could literally be cutting off the bait supply, which used to fuel those epic striper bites in the rip lines, etc. And that this is a likely reason the stripers just haven’t been coming back.

But it goes even deeper than that. Local fishermen argue that recent levels of industrial squid fishing off the islands have affected everything. And that it’s become much harder to catch any fish around the islands anymore. While there’s no causal data to prove it, historically productive fishing grounds are now relatively lifeless.

Local fishermen admit that the squid boats have always been there, just not so close and not so many of them.

Islanders aren’t asking for any reduction in the squid catch, or that they just go away… But what they are asking for is for those boats to move farther off the coast, where they aren’t working that proverbial funnel, and where they aren’t potentially cutting off the islands’ bait supply.

The Mid-Atlantic Council is currently in the process of developing a Squid Capacity Amendment, the initial intent of which was to deal with latent capacity and new entrants in the fishery. But during the scoping process, the localized depletion of squid off of Nantucket was flagged by a local fishermen.

Reasons ranged from, it didn’t fit the original intent of the action, to it would extend the Amendment’s timeline (regardless of the fact that staff said, on the record, that it wouldn’t), to there was no real quantitative analysis they could do (even though staff said that there was… e.g. time and area/gear conflict).

Yet probably the most compelling one is that such “localized depletion” of prey species and its effect on predators can’t really be proven.

While it might be common sense to you and I – e.g. you remove 19 million pounds of squid in an area, it would of course have an effect on predator abundance – there is no real causal science that could show this is the case.

So industry just calls it anecdotal, and waxes that such localized depletion claims are without merit.

Yes, the Council certainly can act on such anecdotal information, but it’s very rare that they do.

On Addressing Localized Depletion (In General)

I mean to just about everyone, save industry who obviously doesn’t want it acknowledged, it’s intuitive.

A bunch of boats dragging small-mesh nets as big as football fields, which catch a crapload of bait (millions of tons!) well, the predators probably aren’t gonna stick around.

How could that not be universally realized is a complete mystery to me.

Of course this is not just a Martha’s Vineyard/Nantucket issue. The New England Council is dealing with this with their Herring Amendment 8 action, which may have buffer zone alternatives as well. The pushback from industry though – who would just have to move offshore some – is immense.

How that plays out is anyone’s guess, but the lack of good localized depletion science doesn’t bode well.

Where Are We Now?

Well, as mentioned, buffer zones will not be analyzed/considered as part the Squid Capacity Amendment… and that really sucks.

A council member (ahem, me) moved to have a new action – to consider buffer zones off of Nantucket and Martha’s Vineyard – made a priority for the Council in 2017. That motion ultimately failed by a few votes. But the action did end up getting into the “Possible Additions” category. Given all the other Council business, I’m pretty sure we won’t see any action on it this next year, but who knows.

Without getting into too much detail here, one thing to note is that the excessive number of squid caught in this area will to some extent be addressed in the Squid Capacity Amendment with alternatives to remove/reduce the carryover from the winter fishery. In other words, the number of squid caught here will essentially be capped, at a pretty high level of course, so I’d argue that is doesn’t sufficiently address the problem.

I mean come on man, this sort of localized depletion problem can really only be addressed by moving the squid boats six, maybe 12 miles out.

Regardless, the issue is not dead… Just sleeping as far as I’m concerned.

I guess what I’d like now is just for anglers to become aware of it. As many as possible. So please do forward this blog post.

I don’t want this issue to just go away, because the reality is that a once epic fishery is, sadly, being destroyed.

Yeah, we can’t prove it’s the squid boats that are causing it right now, but it seems pretty clear, to most of us, that they are.

And there’s an easy solution that wouldn’t force any sort of reduction in squid quota down the industry’s throat.

They just need to move. For the local island(s) economy that depends on the striped bass resource and for the squid resources that I do believe will ultimately suffer if we keep hammering away at them in an important spawning area.

35 comments on “In Martha’s Vineyard & Nantucket, There Ain’t No Stripas”