It’s a new year and that means new regulations, new fishing licenses and new challenges ahead. I can’t help but be excited, however, that the snow just keeps piling up in the mountains, nearly guaranteeing a strong spring run-off that should send baby salmon and steelhead downstream in quick fashion in just a few months from now. And maybe, just maybe, we won’t have to worry about such lethal summer temperatures for a change.

It’s been a welcome change, turbulent seas that may stir up the North Pacific, hopefully putting an end to the devastating warm water blob that’s certainly compromised most species of cold water fish on the west coast, not to mention the rippling effect of the loss of ecosystem function. A great start to the snowpack for 2017, and the reopening of the Dungeness crab fishery, the most economically valuable fishery in the state of Oregon. I’m not sure all the news is good news for 2017, however. 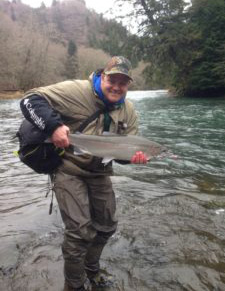 Following the extreme presence of the warm water blob, a large El Nino event and the devastating drought effects and freshwater mortality that affected several different species of salmonids, we’re already seeing the effects in this year’s predicted returns of spring and summer Chinook. The fall Chinook and coho predictions often come later in the spring, but not many are holding out hope for a banner year, such as the several we’ve been experiencing in recent years.

But that’s what makes these fisheries so productive, the volatility and resilience of our ecosystems. From feast to famine, they too serve a purpose. We, as humans, have always tried to control our ecosystem services so that they offer us, humans, the greatest returns on our investment. We may still be generations away from learning this, but one day, we will learn to work in concert with what Mother Nature deals us, instead of the best way to manipulate it for our own benefit. In the meantime, we haven’t recovered the 13 stocks of Columbia Basin salmon and steelhead, the Oregon Coastal coho and the plethora of other species that remain threatened under our “rule.” Learning is a slow process, however, especially when we are asked to change the way we’ve historically utilized our natural resources.

I just had a good conversation with a friend who recently came back from Cuba. Although I’ve never been there, with the lack of an “industrial revolution,” a modernized form of commerce and no easy path for big industry to mine their natural resources, my friend noted that one outstanding and somewhat puzzling feature of the island is the lack of biodiversity that exists in the country. One would think, with this type of culture, that fish and wildlife would thrive here. I asked about the fishing opportunities (of course) and he replied that he observed only one outfitter that offered catch and release fishing at First World prices. It appeared as if the outfitter was some sort of government concessionaire. I wonder how that will change with United States relations in the future. I don’t know what the lessons to be learned here are, but I hope someone gets a chance to do it.

By the time we got to the end of 2016, most seem pretty anxious to close it out. For whatever reason, the New Year offers us a chance to shed our skin and start over again, in hopes of a better outcome in the next year. We won’t get that outcome if we don’t change our strategy, however, no matter how dedicated we feel in the last week of December. How many times have you heard that the definition of insanity is doing the same thing over and over again, expecting different results?

We’ll deal with the cards that were handed to us, we’ve even seen worse, but you’ve often heard me say that we have to manage our resources more conservatively than before since it seems we have a poor track record of keeping our fish and wildlife in healthy abundance. I’m not sure that will change in the near future, but the first step in conservation is actually recognizing that there is a problem.

It’s highly likely that we’ll continue to operate the Columbia River hydropower system like we have for the last five decades, continue to harvest timber off of private and public forests at a rate that will continue to harm water quality, and spray compromising chemicals on our landscape that change animal behavior and contribute to the bioaccumulation of pesticides in our ecosystems. Substantial changes in the way we do business rarely happen when destruction is slow. All I ask of our collective, consuming community is that we start to look at other ways of doing business in the New Year. Maybe you attend an informative meeting that you’d like more information on, or come together with other like-minded folks and ask harder questions to your state or federal legislators. There are better ways for us to get engaged and make change, but mostly, we hope your 2017 is filled with change and a happy, healthy and sustainable harvest of all gifts given to us by Mother Nature.