If you fish offshore, this should concern you greatly…

Been hearing rumors for about a month now. But really, just found out that, well, unfortunately, it’s kinda true…

The National Ocean Policy is currently #210 on House Freedom Caucus’ list of rules, regulations and policies to remove or revoke in the first 100 days.

I mean, holy (expletive)! Really? After all that work and effort to make things better for everyone who uses the ocean? Wow…

The argument of course is that the National Ocean Policy’s “planning” creates a gratuitous layer of regulation for businesses operating in ocean environments. But really, that’s complete bull-(expletive). Anyone who says something like that clearly doesn’t understand what ocean planning is.

Yes, I’ve written about the National Ocean Policy a few times here over the last couple of years. As an angler, if you aren’t already aware of it and its impacts, you really should be.

If I had to boil it down, I’d say the National Ocean Policy — also known as “Executive Order 13547 — Stewardship of the Ocean, Our Coasts, and the Great Lakes” basically guides a deliberate planning process for present and future ocean uses, with full stakeholder input. Among other things, it seeks to provide for a full accounting of ocean use and stakeholder concerns before important decisions are made on what to put where. 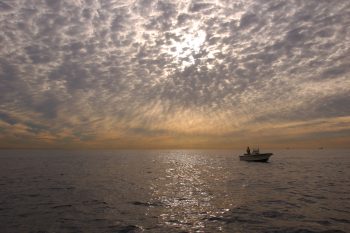 So from my, and presumably your perspective as an angler, it should be self-evident why this is important. If you still haven’t gotten it yet, it works to protect fishing grounds… from offshore wind, oil and gas, sand mining, natural gas platforms, aquaculture, cable laying… anything really that’s likely to screw us out of those “go-to” spots.

The reality is that in the past there has been very little in the way of consultation with fisheries agencies, or fishermen for that matter during the permitting process for such development proposals. So there would be little understanding of what sort of impact there might be on fisheries until well after the process had begun. Clearly that’s problematic.

Having agencies identify and resolve user conflicts early before they become problems (e.g. after the permitting process) would not only benefit fishermen, but developers as well.

Consideration of stakeholder concerns from the beginning would most certainly negate the need for future mitigation, not to mention diminish the usual head-butting between users. In the end it would be a smoother, cheaper and less burdensome process for developers.

So I fail to see how the hell this sorta thing is an over-burdensome and “unneeded” level of regulation? I mean, come on, man…

The ocean-use data component is a really important part of ocean planning in this context. On the publicly accessible data portals you can find maps that show the overlaps among different uses, such as fishing, shipping lanes, sand excavation, recreational boating and proposed windfarms.

These portals are a pretty damn important planning tool, with obvious far-reaching, practical uses for developers and ocean/fisheries managers. They took years to create in collaboration with stakeholders, and give us a common place to start discussions from. This sort of data collection and mapping is an ongoing process critical to future ocean use. It needs to continue.

A few other things I should mention here.

While it may sound kinda silly, the National Ocean Policy compels the dozens of state and federal agencies that make decisions about offshore business to work together. It’s supposed to stop agencies from going every which way, trying to develop on top of each other, and cutting groups like fishermen out of some pretty important decisions.

Yes, it’s stupid that we have to tell agencies to work together and listen to fishermen, but the reality is that a National Ocean Policy is the sort of thing that’s needed to make sure that it happens.

The National Ocean Policy also calls for a holistic way of looking at marine ecosystems, and recommends that resources be managed in a way that keeps them healthy. Anglers have been asking for this for decades, because if we don’t have healthy ecosystems, we don’t have fish. Yes, of course oceans are under stress from pollution and habitat loss and climate change, etc. If we don’t factor all of this in when making decisions about how to use a place, we’ll inevitably lose it.

The Northeast and Mid-Atlantic states just finalized — after years of extensive work with industry stakeholders (including fishermen) and the public — two regional ocean plans that set out a list of steps for better collaboration on important issues like siting offshore development, as well as steps like engaging fishing communities in planning and review of sand mining and development proposals, and trying to factor in the fishing community’s centuries of ocean knowledge in management decisions.

Removing the National Ocean Policy just shoots the messenger, for no real reason, because getting rid of it won’t make our ocean any less busy. Instead, it will bring back the chaos that the past few years of coordinated work are starting to remedy.

Chris Brown recently wrote a great piece about the Northeast Ocean Plan. In it he says, “The Great American fishery was once defined only by its enormity. In the future it will be defined by its resilience and adaptability. Ocean planning goes a long way to ensuring that we do not become collateral damage of more powerful ambitions and that we will remain viable small businessmen who proudly feed the many millions of people of our great nation.”

Fishing businesses like mine, and fishing in general, is better protected with the National Ocean Policy. The policy is not a new idea — it’s based on decades of research and the recommendations of two separate, bipartisan ocean commissions.

The National Ocean Policy is the very kind of common sense good governance we need more — not less — of.

Let me put it plainly: removing the National Ocean Policy would just be stupid… And a big mistake…

3 comments on “National Ocean Policy On The Chopping Block?”