Just back from Alexandria, VA… So while all of this is still fresh in my head, I thought I’d get it down.

First, summer flounder (aka fluke): As readers likely know, there’s been lots of controversy here. Because… well, because if we want long-term sustainability, cut-backs in harvest are, unfortunately, necessary… and, of course a lot of people don’t want to make those cutbacks.

If you didn’t catch it, my prior post on the subject can be found here: The Straight Dope on Fluke. 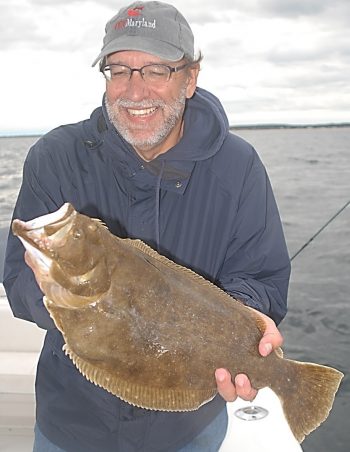 Above: Fluke regulations will be constraining next year, but not unreasonable. Top: Stripers aren’t protected by the Magnuson-Stevens Act. Photos by John McMurray.

The long and short of it is that summer flounder has suffered 6 years of poor recruitment (poor spawning success). Because the number of fish are trending downward at the current rate of removals, just about all of the available science indicates that we are “overfishing” (removing fish from the population at a rate they cannot replace themselves) and the stock is dangerously close to being “overfished” (at a largely depleted level).

Bottom line? If we want a robust summer flounder fishery into the future, we’ve gotta bite the bullet.

Important to note here that not only are these cuts a good idea if you are looking anywhere past next year, but because fluke are managed by the feds, such cutbacks are not discretionary, they are a requirement. Try as they might, state managers can’t dodge that responsibility. If they did the Feds would either mandate a precautionary management measure or shut fishing down in federal waters.

Despite all this, there was a lot of pressure to ignore the science, keep fishing at status quo and well, get into a lot of trouble… and I do understand why. Constraining regulations undoubtedly impact businesses that rely on PUBLIC resources. And fishing dependent businesses have bills to pay, and they need to keep their heads above water.

But let’s be clear about what we’re talking about here. No one is suggesting ending fluke fishing. The regulations that were passed at this week’s meeting (last week by the time of this goes up) aren’t in my opinion, punitive, given we really do need to make a significant reduction in removals if we want a sustainable fishery.

In the NY, NJ and CT region we’re going up an inch in size and losing two fish off the bag limit. In other words, we’re going from 18 to 19″ and from five fish to three. (A quick note here: increasing mortality on larger older females does not significantly reduce fecundity of the stock as some relentlessly suggest… remember these fish have spawned a few times before we bag them, but that’s fodder for another post).

Perhaps what’s more important than the size and bag limit is that we won’t lose any of the season. Under the new regs, our region will have a full 128-days… Exactly what we had last year. 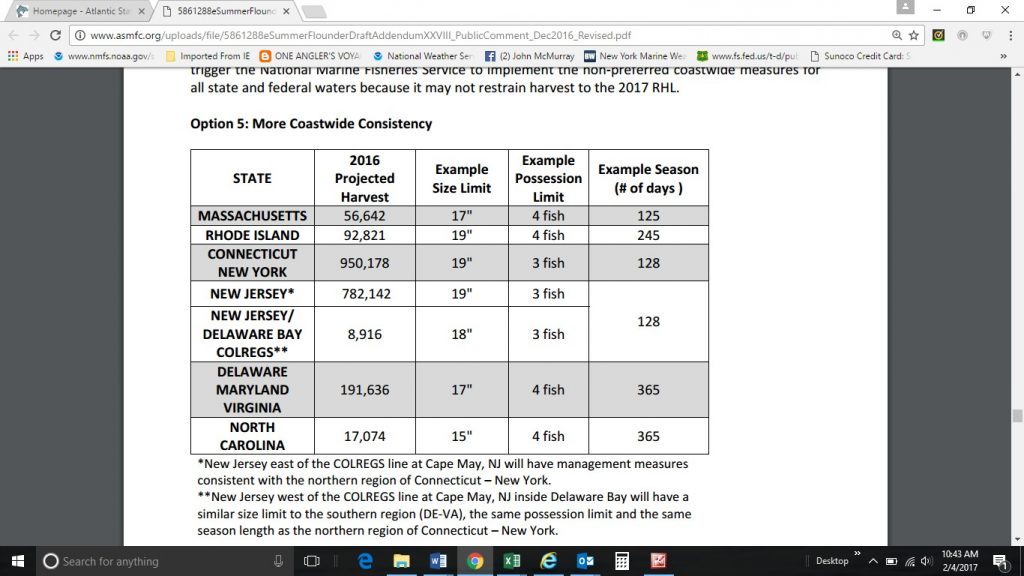 Yes, the new regs are constraining, but I don’t see how it’s the end of the world either. Given the status of the stock, and what’s at stake here, I’d go so far as to say they’re very reasonable. Frankly if any other available option was approved, it would have been much, much worse for us.

Yes, to the north and to the south of us, there’s a greater reduction, compared to the prior years’ regulations anyway. But frankly, while those other states might not agree with me here, the reductions across the coast are equitable, and provide the greatest amount of opportunity for ALL anglers … and that is a good thing.

So where we’ve ended up here isn’t a terrible place IMO. We are making the needed reductions without catastrophic measures. And believe me, they could have been catastrophic.

New Jersey is really the only state adamantly opposed to any reduction. I don’t think I’m misrepresenting when I say the most vocal representatives of that state don’t believe in the science, don’t believe that there’s been poor recruitment and a definitive downturn in the stock, and they don’t accept ANY conservation measures when to comes to summer flounder.

What they tried to do at the meeting was postpone any regulatory action until the Trump administration had a chance to take the reins. What “no action” would have meant in real life is a reversion back to what are most certainly punitive measures (state by state regulations that result in severe cutbacks in some states, or a considerably more constraining “non-preferred coastwide alternative”), at least until things could have been straightened out. According to comments by state officials, Jersey will likely now go out of compliance (what that means is an entirely different blog post also).

The point to all of this, however, is the commission had to reach a compromise at this meeting by making significant reductions while minimizing, to the extent it could, the economic impact to stakeholders.

While sure modern fisheries management is sometimes overly complicated, the basic concept is really quite simple… When the stock is down, you reduce mortality on it. When it’s up, you can increase mortality… some. Certainly not to the extent though where we go back to the old days when we killed an (expletive)-ton of pre-spawn fish and simply maintained the stock at depleted levels. Only a small portion of the public benefits from that sorta thing.

Getting back to the point though, THE ONLY reason the commission bit the bullet and made this decision is because, well, they had to.

That is because summer flounder is jointly managed with the Mid-Atlantic Fishery Management Council, a federal body that must comply with the federal mandates contained in the Magnuson-Stevens Act to prevent overfishing and rebuild a stock once it becomes overfished.

If summer flounder wasn’t managed federally, I have no doubt the decision made at the meeting would have been different.

With that in mind, let’s get into what happened at the meeting with striped bass.

According to a 2015 stock update, the spawning stock biomass is actually pretty close to the “overfished” threshold. And based on the most recent 2016 removal estimates, we were above the fishing mortality target. And this is WITH the 25% Addendum IV reduction managers finally implemented in 2015.

Sounds like we should be cautious and stick with that 25% reduction, right? At least until the new benchmark stock assessment is released (scheduled for the fall of 2018) when we’ll have 3 years of new data and other up to date information to make a management decision on, which was the clear intent of Addendum IV anyway.

But here’s the thing… The commission doesn’t have to avoid overfishing with striped bass. Because striped bass isn’t a federally managed species (it’s managed exclusively by ASMFC) those same mandates that essentially forced action on fluke, don’t apply to striped bass.

Frankly, the ONLY reason they voted to reduce fishing on striped bass by 25% back in 2014 was because the great majority of the fishing public demanded it. Most striped bass anglers saw the stock tanking. And so they came out in numbers to public hearings and submitted hundreds of comments. Really, without that, I doubt the commission would have done anything!

Getting back to last week’s meeting, a motion was passed: “To initiate an addendum to the Atlantic Striped Bass Fishery Management Plan that considers a relaxation of the coastwide commercial and recreational regulations.” In other words, to walk back on that reduction the commission agreed to, in spite of all the info provided by the technical committee at the meeting, which widely suggested that there was little to no biological justification for doing so.

Perhaps I was naive in thinking such a motion had little chance of passing. But surprisingly it did, by a narrow margin.

Those commissioners who supported it were simply trying to placate complaints that charter fishermen in the Chesapeake Bay can’t kill an 18″ fish anymore, and that somehow a 20″ size limit is creating a “crisis,” although the catch statistics certainly don’t indicate that to be the case.

The fact of the matter is harvest was way up in the Bay (58%) when the Bay States were actually supposed to reduce it by 20.5% as part of Addendum IV… And according to the analysis, effort appeared to be up 50% as well. Undoubtedly, that’s due to recent availability of fish.

That said, I don’t doubt some charter boats are experiencing impact with the change in size limit. But overall, given effort and catches are up, not down, it’s pretty hard for me to see how there’s a real crisis here, simply because the size limit went up from 18 to 20″.

But let me get back to the point here, so I can wrap this thing up.

Despite the science indicating that relaxing those regulations will more than likely lead to overfishing, and the risk of having an overfished stock, we are moving forward with such an action. Because the commission can take those risks without any repercussions from the feds. And that really sucks if you are a coastal striped bass fisherman, that depends on a healthy and abundant coastal striped bass stock.

Brass tacks… While there are plenty of anglers who love to bitch and moan about federal constraints on fisheries, particularly with fluke, those same constraints absolutely protect us, the general fishing public, from what would inevitably be widespread overfishing, and widespread depletion of recreationally important stocks.

Because anglers generally suck at fishing, because they use the least efficient gear and have the least range, at least compared to the commercial side of things, we simply need abundant and widely distributed stocks to be successful. And the Magnuson-Stevens Act works to ensure that… not just today, but for the long term.

As far as striped bass goes, well, we’ll just have to rally the troops and fill the hearing venues again.

Stand by for hearing schedules and other updates.