What role will local fishing, agriculture and food enterprise have in supporting Rhode Island and the region moving forward? This was the primary question explored as 350 business, government and community leaders gathered at the University of Rhode Island for the first Rhode Island Food System Summit in January. The summit was organized by Sue AnderBois, Rhode Island’s (and our nation’s) first state director of food strategy. 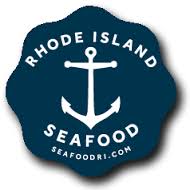 The RI Seafood brand label insures consumers that the seafood it’s on was landed or grown in Rhode Island.

The aim of the summit was to obtain input on a draft of Rhode Island’s first comprehensive food strategy. Key recommendations in the draft food strategy included alleviating food insecurity (now at 12%) and hunger in Rhode Island; making food production more accessible; creating, sustaining, and growing markets for Rhode Island’s products; prioritizing environmental and economic sustainability; and creating and sustaining the climate for food-related businesses.

The group discussed barriers that young people face when wanting to get into fishing as a career. Major obstacles sighted included fishing license availability and the capital investment it takes to purchase a boat and gear. Michael McGiveney, president of the RI Shellfishermen’s Association, said, “We have an apprentice program in place where we take people out to fish that want to get into shellfishing. When speaking with them we find that the lack of licenses makes it very difficult for someone to get into the business. The second largest challenge is the cost of entry… the cost of a boat, motor and gear. We are working to help fishermen get over these obstacles.”

Taking advantage of underutilized species was also sighted as a major objective of the food plan. Anna Malek Mercer, PhD, executive director of the Commercial Fisheries Research Foundation, said, “Scup is a great tasting white meat fish that is an underutilized species. We never harvest close to our catch limit as the market to support a large scale scup fishery does not exit.”

Derek Wagner, owner and chef at Nick’s on Broadway restaurant in Providence, RI said, “We have brought scup into our restaurant along with other local species (it’s the only place I’ve ever had fluke and eggs) and it is always well received by patrons.”

At a recent Rhode Island Seafood Marketing Collaborative meeting, John Delgado, seafood buyer/supervisor at Dave’s Marketplace (a chain of grocery stores) said, “We worked with the Commercial Fisheries Research Foundation and had scup demonstrations in our store cooking samples for patrons and selling fresh scup at the counter. Everyone that tasted the scup loved it.” 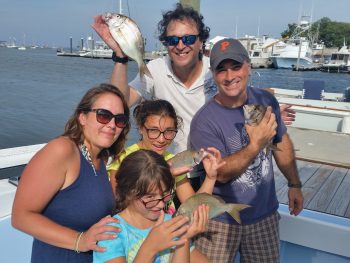 Dr. Mercer said her foundation completed a scup market study this year. One of the key study findings was that people really like to eat scup, however, the processing equipment to fillet scup on a large-scale fishery basis just does not exit. So she and her colleagues at the Commercial Fisheries Research Center developed a fish processing machine that can effectively and cost efficiently filet scup in large quantities for consumption.

“Now it will be a matter of building a market for scup,” said Mercer. “As Rhode Islander’s could never purchase and/or consume the amount of scup needed to make a large-scale fishery a success. The market has to be broader than Rhode Island so we have some awareness and marketing work to do to build a market.”

An effort to brand “Rhode Island Seafood” was mentioned to help with the scup initiative. Three years ago a similar effort was launched by the state and is now gaining momentum with a number of processors, fish retailers and restaurants on board with the program. Pre-approved fish processors that land fish in Rhode Island can use the “Rhode Island Seafood” seal or stamp if the fish is landed or grown in Rhode Island. If a fish processor is approved to use the seal, anyone along the supply chain gets to use it as well (i.e. dealers, fish markets and restaurants).

Responsible fishing and growing fish to abundance so there are more fish to harvest for all to eat and enjoy were also topics of concern in the fisheries breakout session.

Chris Brown, commercial fisherman and president of the Commercial Fisheries Center of Rhode Island, said, “We are a group of responsible, conservation-minded fishermen who welcome the opportunity to be more accountable. Fishing is a privilege and not a right. As the fish in the ocean are not my fish or the industry’s fish but rather the fish of all the people in the United States of America.”
The Rhode Island Food Summit and draft food strategy were well received by those in attendance.

Visit www.relishrhody.com for a copy of Rhode Island’s food strategy and information on conference input when it becomes available.