Summer flounder (like these caught on the author’s charter boat) have had a declining spawning biomass for six years. New regulation options aim to reduce harvest limits, putting fish first to rebuild the fishery.

It’s post-inauguration and the dust hasn’t settled. In fact, nothing is settled. It’s more like a whirlwind. My greatest fear is that the fish get left behind. Rather than growing fish to abundance so there are more fish to catch and eat for all, policies are being reexamined and others may be put in place that will relax fishing regulations with little regard for the fish. 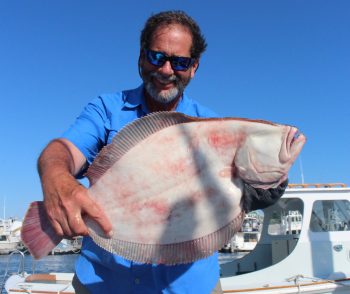 Capt. Dave Monti with a summer flounder caught under the Newport Bridge, RI. Scientists say conservation measures are needed to rebuild summer flounder, but some in opposition want to fish, fish, and fish.

Some in the fishing community who are less conservation-minded want to relax fishing regulations. Many are backed by big business interests such as large boat manufactures, tourism, major fishing and outdoor retailers that have much to gain by allowing all to fish, fish and fish.

The fish are taking a back seat, not at the expense of fishermen, but at the expense of those big businesses that make money off the fish and political leaders that put votes first and the fish second.
This is why we need strong national fishing laws that put fish first ahead of financial or political interests. Under the Magnuson-Stevens Act (MSA), the federal fisheries management law of this nation, 40 species have been rebuilt. They were rebuilt because we put the nation and fish first rather than the self-interests of those that prioritize short-term economic gain over long-term conservation of the resource. For example, some states often are shortsighted; they want to open up fishing so local tourism and businesses grow at the expense of the fish.

Today, the MSA’s authority is under attack on the East Coast from big business and states that want to continue to overfish summer flounder (fluke). They have been overfishing for years while other states have supported conservation measures to fish within harvest limits.

On the state level, summer flounder regulations will likely test our resolve to put fish first in 2017. A decline in the summer flounder spawning biomass for six years in a row led the Atlantic States Marine Fisheries Council (ASMFC) to suggest a 41% coastwide regulation reduction in both recreational and commercial fisheries for 2017.

At the ASMFC public hearings held along the East Coast in January, summer flounder options cut bag limits in half, increased minimum size and reduced the length of fishing seasons.
These regulation options, developed to meet needed reductions, stimulated opposition from those less conservation-minded. Strong opposition at public hearings came from New Jersey and New York where the most severe overfishing has occurred and therefore the most severe conservation measures would be needed to rebuild stocks in these states.

States opposing rebuilding options have questioned the validity of data collection, analysis and fisheries management policy obtained from the best available science. It is a tactic that has been used many times before… if you do not like regulations you declare that the data is faulty and claim that we should be allowed to take more fish. The data is not perfect. We use the best available data and should work to make the data better. Continuing to fish, fish, fish, however, can lead to overfishing and dramatically harm a species.

Many fishermen believe, like those attending the ASMFC summer flounder hearings in Rhode Island and in other New England states that the summer flounder stock was/is in trouble and that conservation measures are necessary and appropriate. Private recreational anglers and those active in the charter boat fishing industry have taken this position. 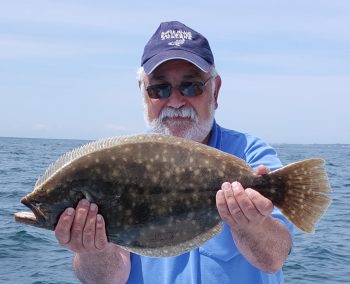 Steve Medeiros, president of the 7,500 member Rhode Island Saltwater Anglers Association, said in an ASMFC summer flounder letter, “Our Association has always believed in conservation (and a) “fish first” attitude when a species stock is under stress.”

Capt. Rick Bellavance, president of the Rhode Island Party & Charter Boat Association (RIPCBA), Steve Medeiros, president of the RI Saltwater Anglers Association, and a host of private anglers at Rhode Island’s summer flounder public hearing all supported conservation measures to help rebuild fish stocks. They said they did not like the more conservative regulations but understood that they are important to implement in order to rebuild. Any of the options supported by these anglers would have achieved the required 41%.

However, last week in an effort to support fishing interests (rather than the fish), the ASMFC voted to fall short of Recreational Harvest Limit reductions and approved an option (Option 5) calculated to achieve only a 28 to 32% coastwide reduction. In a press release last week Mike Luisi, ASMFC summer flounder board chair, said, “By our action, we struck a balance between the need to reduce harvest, while taking into account the socioeconomic impacts to our stakeholders.” So the fish (in this case summer flounder) took a back seat to fishing interest.

In fact one state, New Jersey, is refusing to make any reductions. Bob Martin, New Jersey DEP Commissioner, has said, “Enough is enough.” And says New Jersey is steadfastly going to maintain status quo and not compromise with requested harvest limit reductions.

Without a strong national fishing law (MSA) and it’s “fish first” policy to rebuild fish stocks, we as a nation would not be able to rebuild fish stocks to maximum sustainable yield (MSY) levels. Maximum sustainable yield allows fish to be safely taken at the greatest possible level without depleting the resource one wants to take from, and without otherwise negatively impacting the environment. If we grow fish stocks to abundance, more fish will be available for all to catch.

Although the Magnuson-Stevens Act (MSA) is working and has been successful, it is under attack in this country, by political leaders that represent large fishing industry interests looking at short term gains rather than the sustainable future of our fish stocks.

Political leaders (senators and congressmen) who represent the voices that would sacrifice the long-term health of fish stock over short-term gains have suggested (with legislation) that we change and weaken the MSA so states can control fishing in their areas and more fish can be taken.
Summer flounder regulations will test our resolve this year. Will it be fish first in 2017, or the interests of businesses that make money off the fish?