Final action on the Unmanaged Forage Amendment on Monday! This is your last chance to weigh in

Just about everyone who’s been out to the 30-fathom line this year has seen it. A ton of really small mackerel/tuna-like fish schooling in dense concentrations and great numbers.

A couple of weeks ago, we started to see them, a few dozen casts into them with a popper and KABOOM! Like someone had dropped a piano in the water. One of the most awesome takes I’d ever seen. We almost lost an entire 400-yards of line before I could light the motors off to follow it. Forty minutes or so later, 130 pounds or so of muscular bluefin tuna hit the deck. Very, very cool stuff.

While I have yet to actually hold one in my hand, I’m fairly certain that what we are seeing is a mix of several different species: mostly chub, but bullet and frigate mackerel also.

Why do I bring this up? All these species are currently being considered for protection in the Mid Atlantic Fishery Management Council’s list of “unmanaged forage” species.

Back in December of 2014 the Council initiated an Amendment that sought to “prohibit the development of new, or expansion of existing, directed fisheries on unmanaged forage species until adequate scientific information is available to promote ecosystem sustainability.”

The intent of course is to protect the lower trophic levels of the food chain that sustain all the important recreational and commercially targeted predators. Striped bass, bluefish, fluke, tunas, etc.

I think it’s a pretty damn important action. Because given the dynamics of commercial fisheries right now, any and all of these currently unfished, or lightly fished species are under threat of potential large scale harvest.

In fact chub mackerel, one of the above species we’re beginning to see in great numbers offshore, is a perfect example. I wrote about this in some detail here: Holy Mackerel, but the short version is that it’s a large scale fishery that popped up quickly.

So… This coming Monday the Council plans to take final action. Here’s what you need to know. 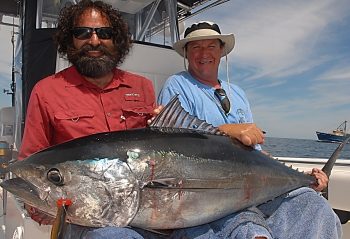 Above: This bluefin smashed a popper fished on a chub mackerel school. Top: False Albacore. Photos by Capt. John McMurray.

The first vote, and perhaps the most important, will likely be on the list of “Ecosystem Component” (ECs) species to be included in the action. It’s really the “straight-faced list” the Council’s Ecosystem and Ocean Planning Committee came up with… what we know gets eaten regularly by important predator species and/or is under a real or perceived threat of an industrial scale fishery developing.

Of course, one of the big rubs is false albacore.

If you fish in these parts, you know it’s a REALLY important fish for anglers. Particularly light tackle guides, ahem, like me. Yes, it is without a doubt a predator, and a ferociously strong one at that, which is of course what makes it such an awesome light tackle fish.

But, well, once you move out to the 30 fathom line, it becomes an important prey species for large tunas and billfish also. Because of its seasonal predictability and its tendency to show up in dense schools, it is undoubtedly susceptible to the sort of industrial scale fishery we hope to prevent with this action.

Yet, because they don’t quite fit the traditional low-trophic level definition of forage, there are some Council Members, as well as Council and NOAA staff who are recommending it be dropped from the list.

Certainly there is justification to keep it in. Yet, some are recommending that instead of including it here, we initiate separate action (aka a little tuna Fishery Management Plan (FMP)). The problem here of course is proving this species is in need of conservation and management, and whether or not initiating such an action is worth the Council’s time.

It arguably isn’t really in need of conservation and management because, while there are small scale commercial fisheries for it, there isn’t really any large scale effort… At least not yet. And that’s exactly why it’s more appropriately included in the Unmanaged Forage Amendment. Plus, if the Council did initiate an action for false albacore (and perhaps other small tunas) there would have to be a tradeoff somewhere. The Council would have to drop something from their priorities list, and that may be something important.

Lastly, if we were to go down the FMP road, the Council’s Scientific and Statistical Committee (SSC) would likely look at this huge biomass of fish and recommend a ridiculously large quota that would allow industrial scale harvest, claiming that it’s sustainable without any real consideration of its place in the ecosystem or possible localized depletion. Maybe I’m wrong on that, but I really don’t think so. 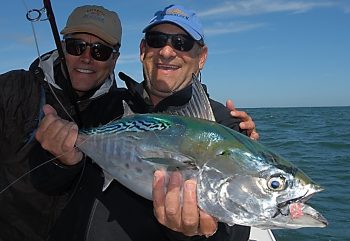 It just seems much cleaner, more effective and just logical to include false albacore in the Unmanaged Forage Amendment.

Seriously, even if you don’t give a crap about any of these other “unmanaged” species, yet understand the real need protect the extraordinary false albacore light-tackle fishery from eminent collapse if such a large scale fishery developed, than you need to either get on the phone or email your state’s council members now.

Bullet and frigate mackerel are also worth mentioning here, given their importance as forage to tunas and billfish. NOAA fisheries has recommended removing them also, although it seems most Council members and staff are recommending keeping them in.

Absolutely, we should keep them in, even if it’s difficult to tie them as prey to Council-managed species such as bluefish. As described above, tuna eat the crap out of them.

The next vote will likely be on the incidental limit, which means the amount of fish on the above mentioned list allowed to be retained.

Fortunately there is strong support for alternative 2Bii, which would designate all species on the list (with the exception of chub mackerel) as ecosystem component species and limit catch to 1700 pounds of all species.

This would effectively allow for a small level of incidental catch, while preventing any real large scale fishery from developing. Industry supports it. We should support it to.

Things get a little tricky here, as the Council discovered a large-scale fishery had developed on chub mackerel during the development of the Amendment. Because such a fishery is existing, targeted and chub are currently sold in large numbers, it doesn’t quite fit into the rest of the amendment. So it has to be taken up differently.

The Council’s intent seems to be to cap the catch to some level based on an average of a certain number of years, and then move towards managing it as a stock in the Mackerel, Squid, Butterfish FMP.

There are a number of alternatives for the cap based on historical landings. Industry of course wants the highest cap based on its highest year of landings. But it makes much more sense to do an average that reflects what the fishery looks like over a number of years, rather than a single outlier.

Council staff recommends a landings limit of 2.86 million pounds based on a 3-year average, then adding consideration of a new amendment to add chub mackerel to the Mackerel Squid Butterfish FMP as a stock in the fishery to the 2017 Council priorities list.

This makes sense to me. We should support it.

Another thing to note are the incidental limit alternatives. In other words what the boats would be allowed to keep after the chub mackerel cap is met.

I don’t think it’s reasonable to not allow any incidental catch, as they ARE caught incidentally in some cases. Doing so would simply promote discarding. But the 40k pound alternative is directing, in my mind. In fact that number is based on what a truck can hold/ship. If the intent is truly to cover “incidental” catch, and to some extent provide incentive to avoid them, then it should be no more than 10k pounds.

So, we should support a 10k pound incidental catch limit for chub.

Pathway to a Fishery

So as part of the action, there are alternatives to consider/evaluate proposals for new fisheries and/or expansion of existing fisheries.

These include requiring an Exempted Fishery Permit (EFP) which would allow some fishing and data gathering. It’s really first step in understanding if such a fishery is sustainable, in an ecosystem context.

But the current NOAA EFP process isn’t specifically designed for this sort of thing. It would need some sort of Council review of permit applications. And so there is an alternative in the Unmanaged Forage Amendment for such a thing.

It doesn’t end there though. After the EFP is completed then what? There needs to be a requirement to proceed with either making it a stock in a Council FMP or to just create an entirely new FMP with reference points, etc. That is the only way to ensure full sustainability.

In Short, Here’s What We Should Support

Re the list, we should support inclusion as is, and viciously fight to keep false albacore on. And to a lesser extent chub and bullet mackerel. All are important forage species, whether they fit the SSC definition nicely or not. And all are likely under some threat of a large scale fishery developing.

We should support alternative 2Bii, which would designate species on the list as ecosystem components and limit possession to 1700 pounds.

We should support the implementation of an annual chub mackerel landings limit of 2.86 million pounds (three-year average) with a 10k pound incidental possession limit, and a requirement to begin work to initiate a new amendment to add chub mackerel to the Mackerel Squid Butterfish FMP as a stock in the fishery.

The meeting is this Monday at 9am at the Hilton Virginia Beach Oceanfront, 3001 Atlantic Avenue,
Virginia Beach. Any anglers in the area should show up to support keeping false albacore on the list and to support the above alternatives.

EVERYONE else should be contacting his or her state Council Members today!

3 comments on “On False Albacore, Chub, Bullets & Everything Else”