We worry about fishing mortality. We try to figure out how many fish can be landed without doing long-term harm to the stock.

What we don’t think about very often is how many fish we should leave alive in the water to make the best use of the stock.

Probably nothing illustrates that fact so well as Amendment I to the Bluefish Fishery Management Plan (Amendment), which was drafted jointly by the Mid-Atlantic Fishery Management Council (Council) and the Atlantic States Marine Fisheries Commission. 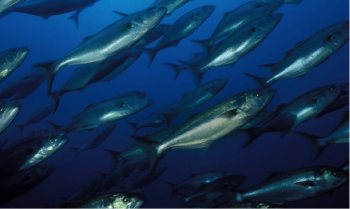 Many anglers don’t like to eat bluefish. While they make good table fare if bled and iced down immediately after they’re landed, and cooked in a way that masks the oil in their flesh, poor handling or thoughtless preparation can result in strong, fishy-tasting dishes that many people find nearly inedible.

However, a lot of anglers who don’t care to eat bluefish still like to catch them. They are one of the hardest-fighting fish found in coastal waters, strike lures with abandon and are widely available, often coming well within casting range of the shore. As a result, bluefish support an active catch-and-release fishery.

Catch and release fisheries need to be managed differently than fisheries driven by harvest. Anglers don’t care about how many fish they can take home, but do care about the number of fish that they encounter. Instead of being managed to maximize the poundage of fish landed, as is the case in food fisheries, release fisheries must be managed to maximize the number of fish that are left in the water for anglers to catch.

That concept has not yet been grasped by fisheries managers, who still think in terms of dead fish on the dock. So the Amendment provided that “If the commercial quota was less than 10.5 million lbs, the quota could be increased up to 10.5 million lbs if the recreational fishery was not anticipated to land their entire allocation for the upcoming year.”

Such provision sends a bad message to anglers, telling them that there’s not much point releasing their bluefish, because if anglers don’t kill their entire quota, the commercial sector will just kill the fish instead.

Under current management, anglers who release bluefish aren’t rewarded with a more abundant bluefish population. They’re merely compelled to watch “their” fish be killed by someone else.

Such management seems to assume that fish only have value when killed, and that catch and release fishing has no value at all. The Council needs to take a step back and read the relevant provisions of the Magnuson-Stevens Fishery Conservation and Management Act (Magnuson-Stevens). They might be surprised to learn that the definition of “optimum yield” includes “the amount of fish which…will provide the greatest overall benefit to the Nation, particularly with respect to food production and recreational opportunities…”

The law places recreation on an equal footing with food production. Yet the Council’s Amendment and the Monitoring Committee’s recommendation don’t follow its mandate, and instead favor enhanced harvest over enhanced recreational opportunities.

If the word and the spirit of the law were truly observed, each sector would be able to make its own decisions on how its quota would best be utilized. The nature of commercial fishing dictates that the commercial quota be harvested. However, if the recreational sector effectively decides that the “greatest overall benefit…with respect to…recreation” is realized when some of the fish are harvested and some left in the water to be caught again, the Council should not override that decision by transferring anglers’ unharvested bluefish to the commercial sector.

That is admittedly a philosophical argument, but the quota transfers have also caused a very practical problem.

Quota transfers have occurred in every year since the Amendment was approved in 1999. Commercial fishermen have gotten very used to them, and some now seem to feel entitled to a share of the recreational quota. They seem to have forgotten that, should anglers begin keeping more bluefish, the transfers will go away.

For awhile, it appeared that would happen in 2016.

The Council approved a quota transfer for 2016, based on the assumption that recreational landings in 2016 would be the same as they were in 2015, and that 2015 landings would be about the same as they were in the year before. However, revised landing estimates released in June showed that recreational bluefish landings had spiked, increasing from 4.8 million pounds in 2014 to 6.2 million pounds a year later.

As a result, predicted 2016 bluefish landings were revised upward, too. The National Marine Fisheries Services (NMFS) said that, in response, it planned to cancel the quota transfer for 2016.

Basil Segos, Commissioner of New York’s Department of Environmental Conservation, wrote a letter to NMFS, asking it not to cancel the quota transfer and calling any such cancellation a “devastating blow to our commercial fisheries.” Bonnie Brady, representing the Long Island [New York] Commercial Fishing Association, also opposes NMFS’ cancellation of the quota transfer, saying that, “The precedent it is setting is the more troubling issue.”

Ms. Brady’s statement seems somewhat off the mark, since the real precedent was set when the Council inserted a quota transfer provision into the Amendment; that was the first and only time that such a provision appeared in a Council management plan. As for the rest of her comment, it’s not clear why Ms. Brady would find it “troubling” that the recreational bluefish quota might be landed solely by recreational fishermen.

However, NMFS ultimately backed off its position, announcing on August 1 that further investigation revealed that 2015 recreational landings were being revised downward again, and that 1.57 million pounds of bluefish will be transferred from the recreational to the commercial sector. Such transfer, while smaller than the 2.2 million pounds originally contemplated, should alleviate most of the commercial fishermen’s concerns.

Even so, with the bluefish quota transfer so recently in the news, there could be no better time for the Council to reconsider its quota transfer policy.

Eliminating the transfer would finally allow recreational fishermen to utilize, but not necessarily kill, their entire quota, and maximize recreational opportunities, as Magnuson-Stevens intends. It would also end the commercial sector’s risky dependence on a transfer that might not always occur.

More importantly, ending the quota transfer would be a signal to anglers, letting them know that fisheries managers finally understand that live fish in the water can, in the end, have at least as much value as dead fish on the dock.