Our coastal estuaries are about to get inundated as our most prolific salmon, fall Chinook, begin their journey home to finish out their lifecycle. With that inundation comes a plethora of invasives, including, if not especially, humans. Even though sport-angling boats will soon number in the thousands at the Buoy 10 fishery, our sport take of these magnificent fall Chinook really only represent a fraction of the impacts we’ve had on the Northwest’s most iconic species.

As our ego’s wander, dreaming about just how big of salmon can we catch from the Columbia this year, most of us know what the possibility used to be. Chinook salmon on the Columbia system occasionally tipped the scales at over 100 pounds! Those days are long gone now but one can still hope. In the 20 years I’ve been guiding on the Columbia, the largest salmon I’ve brought to the boat weighed a paltry 45 pounds. But after landing fish after fish in the 12- to 25- pound range, the first 40-pounder that hits the deck looks like a giant!

The Kenai River is really the king of kings when it comes to kings. I guided on the Kenai for 5 years, with my personal biggest reaching 71 pounds in weight. In those 5 years, I landed 13 fish over 60 pounds for my customers. The Kenai fell on tough times shortly after I stopped guiding there in 1996. Recent reports however, indicate that Chinook fishing in the Kenai is “The best we’ve seen in 20 years!” The numbers may be back, hopefully for more than just a temporary show, but I’m not sure we’ll ever see another 90+ pounder come from this magnificent river ever again. 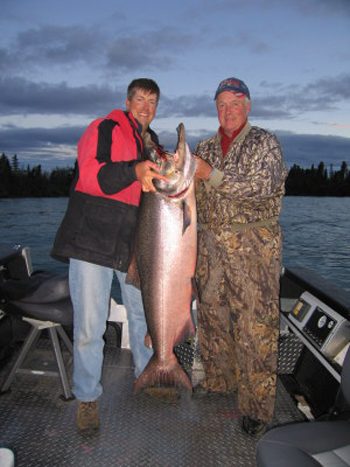 Bob Rees with a big one. Top: Chinook, via NOAA.

I think what may even be more fascinating in the study of the Kenai River story is the fact that many proactive management measures were put in place, maybe a bit too late, to curb the take of these exceptionally large Chinook salmon way back when. Anglers are only allowed to take 1 Chinook per day, 2 per season from this river system. Many of the pro guides promoted catch and release of these big fish by incentivizing a free fiberglass reproduction of your released trophy. While revolutionary, it didn’t seem to make a difference. Soon the fairly common 50-pounder became fairly uncommon and a 40-pounder was the new 50.

I’m far from convinced that fishery managers have the problem solved. Of course no fisherman is without theories. Did these large salmon meet their demise because of:

I’m sure the theories could go on and on but the answer is likely a bit of all of the above. It seems unlikely to turn back the clock and all of a sudden have a bunch of 40+ pounders return to Tillamook Bay this fall, but one can still hope.

One cannot deny our impacts on habitat and certainly our scramble to secure and restore it. Relatively speaking however, it’s still not of the highest priorities for our society, and given the ongoing trajectory of our land use practices, it’s likely to get worse, before it gets better.

But at least we had the month of July recognized as habitat month, recognized by the National Oceanic and Atmospheric Administration for its work on essential fish habitat (EFH). Essential fish habitat is a key component of the Magnuson-Stevens Act, which has reached its 40–year birthday this year. Readers don’t likely need an in depth description as to what EFH is, but you may not know that EFH for salmon exist in both fresh and saltwater environments. Salmon fishers also likely have a much greater familiarity with freshwater ecosystems that are critical to salmon, but since these fish spend more of their intricate lifecycle in the salt than they do in the fresh, ocean EFH is equally important. We just haven’t had the chance to mess it up as much as freshwater habitat.

Since salmon are highly migratory, you may not see them as reliant on kelp forests, deep reefs or sea grass meadows, but their forage certainly is. And like dairy cows in Tillamook County, the more fields of grass you have, the more milk you can produce to make some delicious ice cream. Spend some time navigating the EFH web page on the NOAA site, you’ll be surprised at what you can learn with just a few minutes of reading.