Anglers should be stoked about this week’s Mid Atlantic Fishery Management Council Meeting, and focused on making this sort of thing a requirement

After emerging from four days of mind-numbing meetings, I’m leaving Virginia with my chest puffed out and my head held high. Why? Because in the often dim world of fishery management, we scored a BIG win, for Mid Atlantic marine ecosystems and… for anglers.

After a year and a half of hard work by Council staff, deliberations by advisors, debate amongst Council members, and of course a ton of advocacy from the recreational fishing community in concert with ENGOs, the Council put forth final approval of an amendment to protect unmanaged forage species in the Mid-Atlantic. It now goes to the Secretary of Commerce for approval, presumably for implementation by 2018. 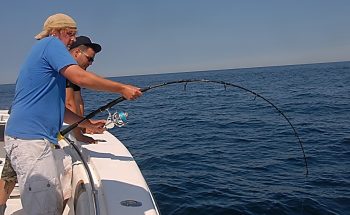 What does the Unmanaged Forage Amendment do? To put it simply, it puts the brakes on any new/potential industrial scale fishery in the region’s federal waters for forage fish (sandeels, silversides, bay anchovies, halfbeaks, sardines, krill, currently unmanaged mackerels, herrings and squids, and a bunch of other stuff), at least until any such fishery could be scientifically proven to be sustainable. Not just sustainable from a harvest perspective, but sustainable from an ecosystem one. That means ensuring enough remain in the water to satisfy the needs of predators like striped bass, bluefish, tunas, billfish, whales, etc.

While this might not seem like much, it’s actually hugely significant. It protects all these species — basically the lower levels of the food-chain — from the growing reduction fishery (for fish meal, etc.) among other things. Given the dynamics of the currently existing directed/managed fisheries, which are either declining, or facing increasingly constraining regulations, it’s pretty darn likely that industry was eyeing new low-value/high-volume fisheries for things like sandeel, etc. And that sort of thing would be devastating to so many recreational fisheries in my neck of the woods.

What’s truly extraordinary here though, and to some extent historic, is that the Council took a proactive, holistic approach with this action. It formally recognized these species’ role in the Mid Atlantic’s marine ecosystem and, instead of the traditional fire-drill approach that happens after we realize there’s a problem, and having to deal with a pissed-off industry that had already invested/geared-up and begun prosecuting a fishery, it took a forward-thinking approach to protecting them. It deserves major recognition for doing this!

Here’s the down and dirty of what exactly went down (For context, maybe take a quick read of my blog post last week if you missed it):

On the unmanaged forage species list. Yes, we lost on false albacore. A couple of us fought hard, but the vote wasn’t even close. While false albacore are most certainly an important forage source for large pelagics (tuna, sharks and billfish), and absolutely their schooling characteristics and site/season specific predictability, along with their poor eating qualities make them particularly susceptible to a high-volume/low value fishery for reduction (aka fish meal), and/or something like cat-food, the great majority of council members just couldn’t get over the fact that, because false albacore are predators themselves, they didn’t fit the traditional forage fish definition.

That said, throughout the comment period, the Council got the message loud-and-clear that the species is critically important to the recreational fishing community. And so it moved to add possible management action for false albacore to the Council’s 2017 priorities list.

What does that mean? Well, we need to be clear on this. It does not necessarily mean the Council will decide to manage it (presumably under its own fishery management plan). It just means we will “consider” management action in the context of our other responsibilities/commitments. In other words, to address false albacore, we’d likely have to put something else important on the back-burner.

Frankly, I’m not so sure the Council would do that. Especially given that it’s unclear whether or not we could make a good case that false albacore is even in need of conservation and management. Right now, I’m not so sure it is. There is not a significant fishery for them… At least not yet… Which was the entire reason that it fit into the Unmanaged Forage Amendment.

Regardless, I’m not even sure management under a new fishery management plan (FMP) would do any good, as quotas would likely be high enough to allow a large scale fishery anyway. And it’s not likely such an FMP would address things like localized depletion, (large scale harvest during the time and area in which they show). But hey, I could write a whole blog on this stuff. And I expect I will moving forward. We’ll have to cross this bridge when we get to it. Stay tuned. 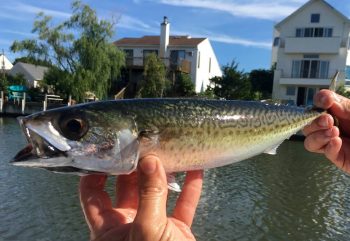 Moving on, we voted to make the entire forage species list, save false albacore and chub mackerel, “Ecosystem Component Species” and to implement a combined “incidental possession limit” of such species to 1700lbs. Anything over such a trip limit would be considered directing and would be prohibited.

If someone wanted to harvest more than 1700 pounds per trip, the Council decided that they would need to get an exempted fishery permit (EFP) which would serve as an initial data gathering exercise, and then, based on such data, if the Council decided such a fishery might not be terribly impactful, it would need to initiate an action to make it a stock in a current fishery management plan, which would require an analysis of the species status and overfishing reference points.

On the issue of the rapidly expanding chub mackerel fishery, which is that small mackerel with the big eyes we’ve been seeing a ton of offshore recently, the Council capped commercial catch at 2.86 million pounds (a three year landings average), which I thought was very reasonable.

After that cap is met, vessels will be allowed to retain an “incidental” limit of 40,000 pounds. We were advocating for a 10,000 pound limit, based on the mean catch, both directed and incidental, from all available years. The 40,000 pounds was based on what industry could fit in a bait truck. How that doesn’t imply directing I still don’t quite understand.

But it’s certainly not the end of the world. Because in the end, we are still capping what was a fast growing large-scale fishery on a forage species we know very little about.

On that note, the council put a 3-year sunset on such a cap with the express intent that the Council move toward full management of chub mackerel through a stock in a fishery designation. That essentially means we’ll be working for the next 3 years to gather the science for overfishing reference points, so that chub mackerel can be managed properly.

Lastly, the Council voted to make the species list and the incidental possession limit “frameworkable,” which allows changes to be made to either or both in two meetings, rather than going through the usual two-year amendment process which provides for a more thorough analysis and public input process.

This scares me a little bit because I don’t like the fact that a future Council could take species off the list, or change what we decided was directed fishing, relatively easily. But, as long as we stay on top of things and keep our eyes and ears open, I think we’re okay.

Despite such minor losses, like I said in the beginning, this is a big, big deal, and overall, a big, big win… But, there’s actually more!

The Council also unanimously approved an Ecosystems Approach to Fisheries Management (EAFM) guidance document, the intent of which is to help facilitate an eventual transition from single species management to a more comprehensive ecosystem-based approach.

What does that mean? It means an incremental, yet deliberate move to managing fisheries in a more holistic way, taking into account things like forage needs, habitat, climate change impacts and species interactions. This will be no easy task, but the Council is doing it! And the Unmanaged Forage Amendment was a critical first step.

In the end, such ecosystem management is very important for us, because what it really does is it results in better functioning and healthier ecosystems, and subsequently, more and better fishing opportunities. Because anglers like us just don’t get the sort of striped bass, bluefish, tuna, billfish, etc. concentrations we need to be successful without everything coming together.

Yet, out of the eight federal fisheries management bodies, the Pacific and the Mid Atlantic Councils are the only ones who have taken such initiatives. Because EAFM isn’t a mandate. But it should be! Because it makes sense in every respect.

Yes, there are still recreational fishing industry groups trying desperately to weaken federal fisheries management law (Magnuson-Stevens Act), because they want to be able to kill more fish, but really, we should all be focusing on getting an EAFM mandate into the next Magnuson-Stevens Act Reauthorization.