Get email updates and action alerts.

Recreational anglers, commercial and charter fishermen and seafood consumers throughout the nation love red snapper. Its popularity in the Gulf provides an important revenue source for local business, recently bringing as much as $23 million into our fishing communities each year. 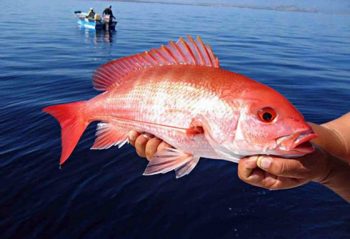 Let’s Not Roll Back 40 Years of Progress

Red snapper haven’t always been this abundant: for decades, fishery managers allowed continued overfishing on this species, causing red snapper stocks to crash in the 1980s and 1990s. Thankfully, better management in recent years under the Magnuson-Stevens Fishery Conservation and Management Act (Magnuson-Stevens Act) has allowed red snapper fisheries to slowly rebuild in the Gulf, and quotas for recreational and commercial fishermen have nearly tripled in the last decade.

And while the iconic species has yet to fully recover, its greater numbers have led some anglers to want to expand fishing opportunities beyond what red snapper populations can handle right now.

We Should Improve Red Snapper Management Under the Magnuson-Stevens Act

Instead of pursuing another controversial bill, Congress should focus on fixing and improving recreational red snapper management under the Magnuson-Stevens Act rather than handing it off to the Gulf States, as previous legislation called for.