Every ten years, as the story goes, Congress has worked together in a bipartisan fashion to reauthorize the Magnuson-Stevens Fishery Conservation and Management Act (MSA). And each time Congress has risen to the occasion to address the new challenges our oceans and fisheries face by amending and strengthening the MSA to conserve and sustain U.S. marine fisheries, the people and communities that rely upon them, and our strong national fishing traditions.

In fact, the Marine Fish Conservation Network (MFCN) was originally founded in the early 1990s around the first major MSA reauthorization when policy makers were forced to respond to well documented ocean fish population crashes in the late 1980s. The MFCN developed a legislative platform to change the focus of the Fishery Conservation and Management Act of 1976 from promoting fishing to conserving fish populations and their habitat and ensuring the long term health and productivity of our oceans. The 1996 Sustainable Fisheries Act, with the leadership of Senator Ted Stevens of Alaska, added crucial conservation measures, including requirements to designate and protect essential fish habitat, end overfishing, rebuild stocks, and protect fishing communities.

The third MSA reauthorization in 2006 also made significant improvements to the law. Those included more progressive provisions to minimize bycatch of untargeted species and reduce fish habitat damage in our marine waters, plus it established management plans and timelines for rebuilding fish stocks and standards for stock assessments and scientifically-based decision making.

Congress has been looking to once again update the law since 2016, but partisan politics has slowed the process. And with our growing understanding of climate change’s impacts on fish populations, ocean ecosystems and fishing communities, the issues we must address are more complex.

Moving forward, Congress needs to reinforce the core conservation and science-based provisions in the MSA; support our nation’s working waterfronts and community-based fishermen; promote policies that contribute to healthy ocean ecosystems and fisheries, improve catch accounting, data management, monitoring, and enforcement to ensure proper implementation of the law; and adapt climate change-ready policies that create a resilient future for our oceans, fisheries, and those who depend on them.

Public input into the Magnuson-Stevens Act 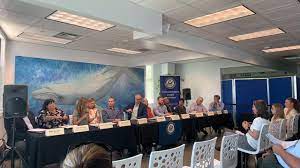 More than seventeen months ago, Congressman Jared Huffman, Chair of the House Water, Oceans, and Wildlife Subcommittee, embarked on an inclusive, deliberative process to seek public input into the next reauthorization of the Magnuson-Stevens Act. Taking a unique approach, Chairman Huffman initiated a series of public field hearings, or listening sessions, across the country to hear from the many stakeholders who rely on our oceans and fisheries. Stakeholders welcomed Huffman’s collaborative and proactive approach to reauthorizing the MSA, but it was also a challenge to all to bring good ideas to the table in an open and honest dialogue. Stakeholders delivered on all counts.

Huffman kicked off the listening tour in the heart of his Northern California district in October of 2019 and proceeded across the country, eventually convening in-person hearings in nearly all of the eight fishery management regions. The Congressman and his staff heard from dozens of fishing and seafood industry leaders, as well as scientists, Tribal leaders, conservationists, anglers, and charter boat captains from all corners. Panelists and participants included several MFCN members who are directly engaged in fisheries management and conservation from the commercial, recreational, culinary, and environmental sectors.

For folks like me who have spent the majority of our careers in the policy world, the tour reinforced what we’ve known for some time: that part of the MSA’s strength derives from its unique balance of national standardized frameworks for conservation with regional approaches to governance and management. Case in point: at each stop on the tour, stakeholders were nearly unanimous in their expressions that the MSA is working, but the discussions centered around different regional issues. Whether salmon on the West Coast or forage stocks in the Mid-Atlantic, participants keyed in on the issues that they thought an updated MSA should address. 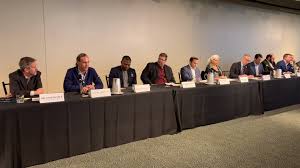 One universal issue also became clear: no matter what part of the country or ocean waters you’re in, ocean warming and climate change are fundamentally negative influences that our fisheries management system must address to ensure a sustainable future for our oceans, fish, and fishermen.

Towards the end of the listening tour, the COVID-19 pandemic struck, shaking all aspects of the U.S. economy to its core. The MFCN pivoted quickly to offer assistance and support to those in coastal communities who struggled to stay afloat as the devastation to businesses, markets, and supply chains created financial insecurity. But COVID has also shone a spotlight on the vulnerable parts of our management system, infrastructure, and supply chain, as well as hightlighted how resilient fishing communities and local seafood systems can be in deeply troubling times.

When Huffman was able to remotely convene the final session of the listening tour, stakeholders raised many of the same pre-lockdown issues, including the need to support working waterfronts and strengthen fishing communities, while stressing the importance that science-based management brings to enhancing decision making and governance outcomes for all. In addition, COVID-19 has emphasized that the fisheries management system we have in place currently may not be as resilient or durable as we need in the face of widespread events such as climate change or a global pandemic. To create more resilience in our fisheries management system, we need additional support for working waterfronts, including improvements to shoreside infrastructure, as well as better science that integrates the reality of climate change with how we manage commercial and recreational catch.

It’s clear that Mr. Huffman and his staff were listening.

Each of the roundtable sessions received significant stakeholder input on these themes, and it’s great to see the clear connection between stakeholder input and legislative language in last year’s draft.It’s also reassuring to see a draft bill that is clearly focused on reinforcing what works in fisheries management – such as the core science-based, conservation provisions that help keep fish stocks healthy – while modernizing the MSA to incorporate lessons we’ve learned since the last reauthorization. For example, we have a lot more knowledge about how climate change and warming oceans can negatively affect fish stocks and their habitat, as well as the businesses and communities that depend on them. Congressman Huffman’s draft package does a good job of reflecting the current concerns and needs in fisheries management, such as shifting stocks due to climate change; diverse and equitable representation in the council system; addressing the impact emerging technology, such as improving electronic technologies use in fisheries management or advanced fishing gear on fisheries; and improving fishery disaster relief for natural or man-made catastropic events.

Much of the draft language is in line with the Network’s goals and priorities, which focus on supporting working waterfronts and coastal communities, improving science-based catch accounting and data management, strengthening bycatch provisions, improving forage fish management, conserving ecosystems and fish habitat, upholding current conservation laws, and making fisheries more resilient to climate change. The Network has identified a few sections in the bill that need improvement, and we have voiced these concerns with Huffman’s staff with hopes that the chairman will amend some of the bill language before formally introducing it.

Path forward in the 117th Congress

So what’s next for this bill?

Since the beginning of year, Congressman Huffman’s team has been synthesizing the plethora of comments received on the discussion draft. He has stated his intentions to introduce and hold hearings on a new MSA bill sometime this year. Given the many other priorities this Congress, movement could be slowed, but we expect to see a bill that is similar to the discussion draft with some changes and improvements based on the feedback received. Given the broad participatory framework created thus far in the process for MSA reauthorization, we do hope the bill continues to move forward in a postive manner through the House.

On the Senate side, we have an optimistic view that the new Commerce Committee Chair Maria Cantwell (D-WA) will continue to be a leader for ocean health and fisheries conservation and sustainability, and we hope she will take up these vital issues in the months ahead.

President Biden has also created an opportunity for progress in fisheries management and ocean conservation via the issuance of Executive Order 14008 on tackling the climate crisis. Section 216(c) of the order calls for the establishment of a stakeholder-driven process to build climate resilience into our fisheries and ocean governance processes. As with Chairman Huffman’s approach with the listening tour for the Magnuson-Stevens Act, we strongly believe that public input would be very beneficial as the adiminstration moves forward.

All in all, the 117th Congress and the new administration are off to a positive start with moving ocean and fisheries policy forward. The Network looks forward to working with them to ensure fisheries legislation, supports healthy marine ecosystems, addresses the real threat of climate change and supports vibrant local economies, sustainably-caught seafood, millions of jobs, and abundant recreational opportunities around the country for generations to come.

1 comment on “Magnuson-Stevens Act Reauthorization: Where We Stand in the 117th Congress”