Note: Public comments on the PID will be taken through 5:00 p.m. on April 9. See below for details. 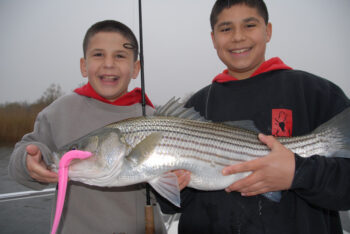 Throughout the month of March, the Atlantic States Marine Fisheries Commission (ASMFC) held webinar/hearings, seeking stakeholder comments on future striped bass management measures. The comments were focused on issues raised in the Public Information Document For Amendment 7 to the Interstate Fishery Management Plan For Atlantic Striped Bass (PID) which, as its name suggests, was seeking input that could be used to shape a new amendment to the ASMFC’s striped bass management plan.

The PID is a wide-ranging document, that addresses nine different issues, including the goals and objectives of the striped bass management plan, the biological reference points that are used to gauge the health of the stock, the triggers for management actions should the biological reference points be exceeded, the timeframe for rebuilding an overfished stock, regional management, conservation equivalency (whether states should be allowed to adopt their own regulations that are different from, but have the same conservation impact as, the management measures adopted by the ASMFC), recreational release mortality, recreational accountability, and commercial quotas.

Stakeholders were also invited to raise any other issues that they felt were relevant to striped bass management.

The ASMFC held hearings on the PID for every coastal state between Maine and Virginia, along with a separate hearing for the Potomac River Fisheries Commission. Just about every hearing saw recreational fishermen turn out in good numbers, and everywhere but New Jersey, where sentiment was split, those fishermen came out strongly in favor of more rigorous striped bass conservation measures. 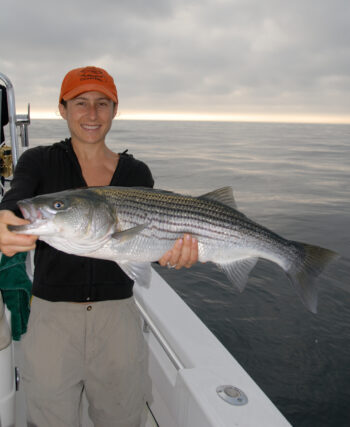 There was very broad support for maintaining the current goal and objectives of the ASMFC’s striped bass management plan. The current goal is “To perpetuate, through cooperative interstate fisheries management, migratory stocks of striped bass; to allow commercial and recreational fisheries consistent with the long-term maintenance of a broad age structure, a self-sustaining spawning stock; and also to provide for the restoration and maintenance of their essential habitat.”

The seven objectives intended to support that goal can be divided into biological and administrative items. The biological objectives would prevent overfishing, maintain a healthy abundance of striped bass, and maintain a broad age structure that includes many older, larger fish, in order to support quality, economically viable commercial, recreational, and for-hire fisheries. The administrative objectives stressed the need for consistent management along the coast, cost-efficient data gathering, and regulations that remain consistent over multiple years.

There was equally broad support for the current biomass and fishing mortality reference points, which are based on striped bass stock structure in 1995 and are calculated to achieve the goal of the management plan. There was almost no recreational support for reducing the biomass target and threshold, in order to increase the fishing mortality rate and resultant landings; some commercial fishermen did support such an approach, while a few members of the for-hire fleet called for management measures that would allow their customers to regularly take striped bass home for food.

Closely related to the initial two questions were the management triggers and rebuilding times. The current triggers require managers to reduce fishing mortality to the mortality target within one year if it rises too high, and to initiate a 10-year plan to rebuild spawning stock biomass to its target level if it ever drops too low. Such triggers and rebuilding timelines were generally, if not universally, favored by those who provided comment.

However, many recreational fishermen, as well as some for-hire operators, criticized the ASMFC for not taking action quickly enough when the spawning stock began to decline. They pointed out its failure to initiate a rebuilding plan in 2014, even after a management trigger which clearly said that it “must” do so was tripped by the 2013 benchmark stock assessment. And they pointed out that, even though the 2019 benchmark stock assessment found the striped bass to be overfished, no 10-year rebuilding plan had yet been put in place.

The ASMFC representatives present at the hearings did, at times, try to argue that the Atlantic Striped Bass Management Board (Management Board) adopted management measures intended to reduce fishing mortality, and that such reductions represented a “first step” in the rebuilding process. However, they could not deny that the Management Board failed to adopt a rebuilding plan that would restore the stock within a period that “is not to exceed 10 years,” as the management plan requires.

The remainder of the issues discussed in the PID were less critical to the overall health of the striped bass stock, but were nonetheless important.

A proposal to investigate the possibility of regional management measures was unpopular, largely because there is no existing, peer-reviewed population model that would support such an approach. Many commenters left the door open to regional management when, and if, such a model was ever developed.

Very few people who spoke at any of the meetings had anything good to say about conservation equivalency, the doctrine that allows states to adopt measures different from those adopted by the Management Board, so long as they are calculated to have a similar conservation benefit.

Much of the opposition arose out of a belief that states abused the conservation equivalency process, and the fact that the Management Board doesn’t follow the dictates of the ASMFC’s Interstate Fishery Management Program Charter, which requires that any conservation equivalent measures “achieve the same quantified level of conservation” as the measures adopted by the Management Board. Such failure was most recently illustrated in February 2020, when the Management Board, in approving states’ questionable conservation-equivalent measures, reduced the probability that Addendum VI to Amendment 6 to the Atlantic Striped Bass Interstate Fishery Management Plan (Addendum VI) would succeed in reducing fishing mortality to its target level from an already marginal 50% to a mere 42%, rendering such addendum more likely to fail than to achieve its goal.

Recreational fishermen were also very opposed to the PID’s focus on recreational release mortality, even though it accounts for 48% of all striped bass fishing mortality. While just about everyone agreed that anglers have a responsibility to handle the bass they catch carefully, and practice good release techniques, they felt that it was inappropriate to single out recreational release mortality as a particularly serious problem. To rebuild the striped bass stock, all forms of fishing mortality, including commercial and recreational landings, must be reduced.

Commenters noted that the release mortality rate for striped bass is only 9%, and that Addendum VI’s requirement that circle hooks be used when fishing for bass with bait should cause that rate to fall even lower. They pointed out that recreational release mortality is a large part of overall fishing mortality because anglers voluntarily elect to release over 90% of the bass that they catch, and that managers should recognize that while recreational fishermen do take some striped bass home, the fishery is primarily a catch-and-release fishery, and should be managed accordingly.

Probably the biggest disagreement among anglers at the hearings revolved around the issue of recreational accountability. Some speakers, who came from both the recreational and commercial communities, felt that the striped bass can’t be effectively managed unless the Management Board establishes a hard-poundage recreational harvest limit and holds anglers accountable when that limit is exceeded. Others felt that recreational accountability should be linked to conservation equivalency, with only anglers in states that adopt conservation equivalent regulations held accountable when such regulations fail to accomplish the needed fishing mortality reductions. Still others argued that if anglers abide by all relevant management measures, and nonetheless kill too many bass, it would be inappropriate to hold them accountable because they remained within the bounds of the law.

The one issue that didn’t receive too much discussion in most of the hearings was whether the commercial allocations should be revisited, although allocations were discussed in Delaware, where commercial fishermen are seeking a larger share of the landings. However, as anglers dominated most of the hearings, commercial issues that did not directly impact the health of the striped bass stock were generally given short shrift.

Anglers expressed widespread support for the current goals and objectives of the management plan, as well as the current biological reference points, management triggers, and rebuilding times, and clearly want the Management Board to react quickly when threats to the striped bass arise. Such comments conflicted with what the PID called the three “guiding themes” of the Amendment 7 process: management stability, flexibility, and regulatory consistency.

While few, if any, commenting stakeholders had any objection to the theme of regulatory consistency, which would militate against the use of conservation equivalency and all of the problems that it generates, management stability and flexibility were viewed as problematic. Maintaining management stability would require the Management Board to take no action, and so perpetuate existing management measures when falling recruitment or rising fishing mortality suggest an impending threat to the stock, while the concept of flexible fishery management would take that inaction one step further, and allow the Management Board to ignore a management trigger that had been tripped by declining abundance and/or increasing fishing mortality.

Comments on the PID will be taken through 5:00 p.m. on April 9. All comments will then be summarized by the ASMFC staff, and provided to the Management Board, which is expected to act on them at its next meeting, which is scheduled for Wednesday, May 5, from 1:00 to 4:30 p.m.

Hopefully, the stakeholders’ comments will influence the decision.