Top photo: A family affair aboard the “Patricia Sue”, as Theresa on leads on deck, her husband Charlie is running the deck and bringing the bag of salmon on board, their daughter Liz is on corks, and the photo was taken by their son, Charlie, in the skiff. See the full-sized version of the photo.

For National Women’s History Month, the Marine Fish Conservation Network has been celebrating the contributions of women to America’s fishing tradition. We’ve reached out to several women asking about their experiences in the commercial fishing industry, and we are sharing their responses.

First up is Theresa Peterson from Kodiak, Alaska, who currently fishes for salmon and has fished for halibut, sablefish, herring, and cod in years past.

How did you get “hooked” on commercial fishing as a career?

When I came to work in Alaska for the summer in the early 80’s, a career as a commercial fisherman was not the anticipated outcome. Some of my college friends were planning to work in the cannery for the summer, and I decided to come along last minute when I couldn’t find anyone to travel to Peru with me. I remember thinking, ‘Why not go to Alaska, I hate the cold and I’m sure I’ll never go North again.’ 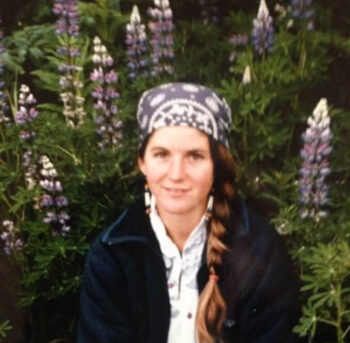 Theresa during her first summer in Homer, Alaska – 1983

Little did I know that the second-choice summer adventure would change the course of my life.

After a few weeks in a processing plant I decided I didn’t want to spend my Alaskan summer working indoors and opted to take my chances and walk the docks with hopes on getting on a fishing boat. Jobs were few and far between for an inexperienced girl from Southern California, but I eventually talked a shrimp boat into taking me out for no pay. I’ve always been a hard worker, and when I eagerly shoveled ice, threw over bycaught species, cooked, and cleaned, the Captain and crew decided I could stay on until the end of the season. Although I didn’t know it at the time, I guess that is when I made my career choice. I wrote my parents a long letter explaining why I wanted to take some time off from college, bid farewell to my college friends and headed back out for another trip.

The season turned out to be just one more trip, and the shrimp fishery closed. After a total of 4 days of fishing in a bay I thought I was pretty tough and seasoned and decided to head over to Kodiak and look for a king crab job. It didn’t take me long to figure out I was way out of my element. Kodiak was pretty rough in the 80’s, and the boats were big and scary. Looking back, it was probably a good thing all the jobs were filled; I had a lot to learn before becoming a professional deckhand but didn’t know it at the time.

I came back to Homer in the Spring of 1984 and set my sites on halibut and salmon fishing, eventually working my way up to longlining sablefish and halibut in the Bering Sea. I took to a handsome young fisherman who hailed from Douglas Island, and we decided to buy our own boat to seine around Kodiak in 1988. My fishing career was cemented; I never left this wind-blown island I gratefully call home and still carry on my love/hate of commercial fishing.

How has the commercial fishing industry changed for women over the years? 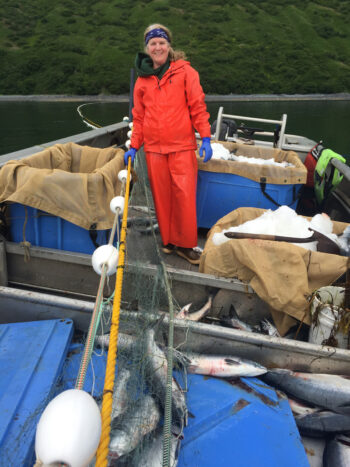 When I started fishing in the 80’s, other woman on boats were few and far between. As it turned out, many of the boats I fished on included another woman. There is no better sisterhood than women working together on a deck. We always looked out for each other, offering help when struggling with something on deck, providing emotional support when it got hard, and renting hotel rooms together when in port so we could take a bubble bath. I will cherish those relationships forever.

The fishing world today has progressed with increased opportunity and respect for women in the industry. I was never brave enough to run a boat, but I see women moving up from the deck to the wheelhouse every year. With more boats willing to hire women and increased opportunity to learn, of course, more women are running boats, and it warms my heart to see the fishing industry evolve.

What has commercial fishing taught you about our relationship to the oceans and its natural resources?

My relationship with the ocean has grown exponentially in the 38 years I have had the opportunity to derive a living commercial fishing. I could sum it up with a single word: respect. I have respect for the power of the ocean, the people, the habitat, and the fish that give up their lives to sustain us. It wasn’t easy for me to get used to killing fish, and over time I balanced my taking from the sea by trying to give back. I have been a strong advocate for sustainable fishing practices and fishery management polices which strive to reduce bycatch of species not intended for commercial harvest. I try to give back to the ocean that has provided so much to my family and me. That first trip on the shrimp boat the crew laughed at me when I tried to save all the baby Tanner crab from going down into the hold, and I still fight for reducing Tanner crab bycatch around Kodiak Island today. As fishermen we have a responsibility to be stewards of the ocean and its natural resources.

How can we better support working waterfronts and the people and families that depend on healthy fisheries?

I believe it is critical that we maintain opportunities for the next generation to pursue a livelihood in commercial fishing. Not only do rising fishermen need policy decisions in both state and federally managed fisheries which support entry level opportunity, but they also need a science-based management system that informs resource management. Well-managed fisheries can provide harvest opportunity for generations to come so families like ours can derive a living from the sea and live in fishing communities like Kodiak, Alaska.

View all posts by Jo Knight →