Top photo: Cod such as this one caught by angler Steve Brustein may be a thing of the past unless NOAA implements rebuilding initiatives, says the Conservation Law Foundation

Who doesn’t like cod fish? Its white, delicate meat is sold in fish markets and supermarkets, served in restaurants and prepared baked or fried as fish & chips, one of New England’s favorite fish dishes. My favorite is baked cod with lightly breaded scallops on top. Bake for twenty minutes in a 350 degree oven and you have a delicious, nutritious, locally sourced family meal.

Well, this great eating fish, Atlantic cod, may be a thing of the past, as the New England Fishery Management Council has allowed it to be overfished for about thirty years, almost to extinction, and has failed to rebuild the stock. 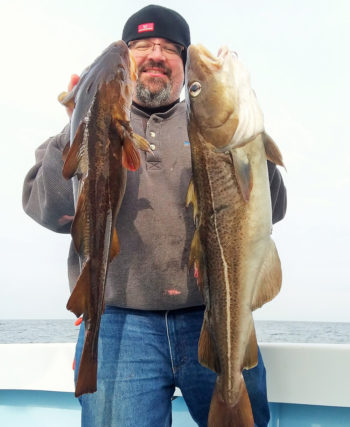 “Our regional managers (at the New England Fishery Management Council) have lost control of and abandoned the cod fishery,” said Peter Shelley, Senior Counsel at Conservation Law Foundation. “After decades of reckless decision-making, Atlantic cod populations are now in crisis. To give this iconic species a chance at survival and recovery, the federal government must take the strongest possible action today and temporarily prohibit further cod fishing.”

CLF’s petition to Secretary Wilbur Ross of the Commerce Department, which oversees the National Marine Fisheries Service, calls for a prohibition on commercial and recreational cod fishing until the populations are out of crisis. The petition also requests measures to collect accurate data by fully monitoring commercial groundfish trips, closing important cod areas to fishing, and reducing unintentional catch of cod in other fisheries.

Under the Magnuson-Stevens Act (MSA), regional fishery management councils are required to rebuild overfished stocks as quickly as possible. In a press advisory the CLF said that both the George’s Bank cod fishery and the Gulf of Maine cod fishery “have essentially been overfished and subject to excessive fishing pressure for more than 30 years. And now, after decades of mismanagement, cod now face the additional stress of climate change.” 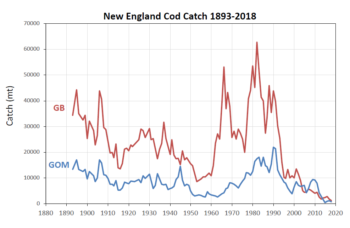 Atlantic cod fishery graphs. These charts show New England cod catch overall and then two separate bio-mass graphs for the Gulf of Maine (GOM) stock and the George’s Bank (GB) stock. The last two graphs demonstrative the failure of GOM and GB cod rebuilding programs. Click to see all charts as a PDF.

Historically, fishery managers, industry and anglers thought the George’s Bank biomass of cod was in better shape than the Gulf of Maine stock. NOAA data supplied by CLF shows that Georges Bank cod stock is in better shape, yet overfishing has occurred with this stock too.

Peter Shelley said, “We have some bad Georges Bank Atlantic cod data, so it is difficult to get an accurate estimate on biomass with trawl surveys presently being done.” However, according to available data, the stock has been overfished.

CLF’s petition highlights the need for the National Marine Fisheries Service to take management authority over cod away from regional managers and bring the fishery back into compliance with federal law by implementing a new plan to rebuild and sustainably manage cod.

Capt. Rick Bellavance, a New England Council member and president of the Rhode Island Party & Charter Boat Association, said, “Every time the Council was presented with assessment data they would use it to develop plans to rebuild the stock. So although the stock is not rebuilt now, the Council did act on the best available science at that time.” Bellavance said, “Stock assessment data has suffered from incomplete bycatch data and the impact of illegal fishing, such as Cod Father, which threw off catch models over the years.”

The CLF petition is unusual; however, both Capt. Bellavance and Peter Shelley can recall when NOAA was petitioned in regard to Gulf of Maine cod stock once before.

Peter Shelley said, “We hope our petition gives NOAA great pause, has them take a hard look at Atlantic cod management in New England and leads them and the New England Council to take action to rebuild the stock.”

As a recreational charter captain who has fished for and enjoyed cod, I hope that NOAA takes this petition to heart, intervenes and instructs the Council to create a rebuilding plan with many of CLF’s conservation recommendations.

The Magnuson-Stevens Act has successfully rebuilt more than 45 fish stocks since 2000. It has effectively rebuilt fish stocks when its conservation and accountability measures, such as rebuilding time lines, pay back for overfishing, etc., have been engaged.

Atlantic cod is an example of how management can fail us when regional councils don’t act quickly enough to stop overfishing and rebuild fish stocks. Atlantic cod needs to be brought back into compliance with federal law by implementing a new plan to rebuild and sustainably manage the species.

If the Magnuson-Stevens Act is enhanced in the near future to help us adapt our fisheries to climate change impacts, we need to make sure its conservation and accountability measures remain strong. We need to make sure that special interest groups do not force their will on rebuilding timelines and we have improved bycatch reporting and other data. We need to make sure the MSA prevents local and regional political pressure being applied for the benefit of a few to the detriment of the fish.