The first question set the tone of the meeting. 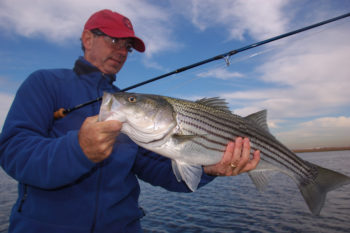 This photo and top photo by John McMurray.

In October, 2019, the Atlantic States Marine Fisheries Commission’s Atlantic Striped Bass Management Board (Management Board) adopted Addendum VI to Amendment 6 to the Atlantic Striped Bass Interstate Fishery Management Plan (Addendum VI), which was intended to end overfishing and reduce fishing mortality by 18 percent, and so return it to a sustainable level. In order to achieve that goal, Addendum VI set a one fish per day bag limit for recreational fishermen, who would be permitted to keep only those bass that fell within a 28 to 35-inch “slot limit” if caught on the coast, or were no less than 18 inches long if caught in Chesapeake Bay.

Addendum VI also permitted states to propose alternative regulations to those adopted in Addendum VI, provided that those regulations achieved an 18 percent reduction in that state’s striped bass fishing mortality, so on February 4, 2020, the Management Board met again to review all such state proposals.

That’s when Capt. John McMurray, a Management Board member from New York, asked the Atlantic Striped Bass Technical Committee (Technical Committee) what the coastwide fishing mortality would be if all of the state proposals were approved.

And that’s when the Technical Committee admitted that it could not give him an answer.

So, as the Management Board began its deliberations, it found itself in a difficult situation. Addendum VI, which it had passed less than four months before, called for an 18 percent reduction in striped bass fishing mortality. Now, it was asked to approve proposed state regulations, but had no way to know whether those regulations, if adopted, would achieve that needed reduction. 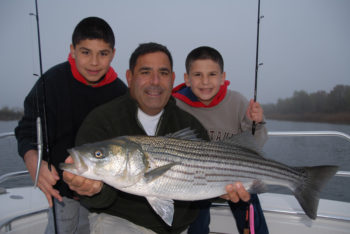 A few more comments and questions made it clear that if the state proposals failed to achieve the fishing mortality reduction contemplated in Addendum VI, there would be no accountability for such failure on either a state or coastwide level.

One Management Board member, New Jersey’s Adam Nowalsky, even admitted that “We’ve got a level of confidence here that when we put all the [state] proposals [together], the number will be less than 18 percent,” but he thought that falling short was OK, because the Management Board “shouldn’t quibble” about whether the reduction didn’t quite meet Addendum VI’s target. He guessed that any shortfall would be minor.

And that sort of attitude, shared by too many Management Board members, is why the Atlantic States Marine Fisheries Commission’s (ASMFC) management process is in desperate need of reform.

Fisheries management is a very demanding and difficult discipline. As a Massachusetts fisheries official once quipped, “Managing a fishery is like managing a forest, except it’s always night and the trees move.” So asking the Management Board to make decisions on state regulatory proposals, when they don’t even know what the effects of such proposals would be, is very unwise. That is particularly true when, if a state’s proposal failed to adequately reduce fishing mortality once put in place, there was no way to impose remedial measures that might repair the harm done to the striped bass stock.

Yet the ASMFC frequently allows states to take such questionable actions, and rarely if ever holds them accountable for the result.

They were not held accountable in any way.

That’s not surprising, because the ASMFC has historically reacted to recreational accountability measures in about the same way that vampires react to holy water. At the February Management Board meeting, Pat Kelliher, a Maine fisheries manager, made a motion directed at states that adopted alternative management measures. It would have required such states to adopt more restrictive regulations if, and only if, their preferred alternative measures failed to achieve the needed reduction in fishing mortality.

While that might seem reasonable to anyone concerned with the health of the striped bass stock, the motion immediately ran into strong opposition.

Not surprisingly, the most strident criticism came from Maryland and New Jersey, states which had adopted controversial and, at least in the case of Maryland, unsuccessful alternative measures in response to Addendum IV, and were now planning to adopt management measures that could undermine the goals of Addendum VI. Michael Luisi, a Maryland fishery manager, managed to convince the Management Board to postpone any action on the motion until the May Management Board meeting.

As is often the case, the objections to holding states accountable for not meeting Addendum VI’s target reduction were based on both the timing and the perceived accuracy the recreational catch data provided by the Marine Recreational Information Program (MRIP). From one perspective, the objections are justified. The National Marine Fisheries Service (NMFS) advises that “The more samples you draw, the more precise your estimate,” so the precision of landings estimates provided for a single state will never be as good as the precision of coastwide estimates.

Still, the relative imprecision of state-level catch estimates doesn’t deter states from using such MRIP data when they’re trying to convince the Technical Committee and Management Board to approve alternative regulations that would allow them to enjoy a more liberal bag limit, lower minimum size or longer season. The percent standard error, something that NMFS says “is similar to the margin of error used in polling,” for estimates of striped bass caught in Maryland during March and April is 36.5. That’s far from precise. Yet that data was used to justify a substantial component of Maryland’s 2020 striped bass regulations.

Using the same data to hold states accountable when their alternative regulations fail to adequately protect the striped bass stock, on the other hand, remains clearly anathema to quite a few Management Board members.

Despite that clear language, the Management Board has taken no action to begin the rebuilding process. Maryland’s Michael Luisi, at the February meeting, went so far as to say that he would consider the Management Board’s efforts successful if, by the time the next stock assessment comes out, the fishing mortality rate has been reduced, and the decline in the spawning stock biomass has slowed.

He didn’t say that the stock should be rebuilding, as Amendment 6 requires. He didn’t even say that its decline should have stopped. To him, striped bass management would be successful if it merely slowed the decline of the already overfished striped bass stock by the time the next assessment was done.

And the next benchmark assessment won’t be released until early in 2024.

Unfortunately, he’s not the only Management Board member who feels that way. Such attitudes explain why the ASMFC, throughout all of its 77-year history, has never managed to rebuild even one overfished stock, and then maintain that stock at sustainable levels. It came close with striped bass, which the Management Board successfully brought back to health after the stock collapsed in the late 1970s and early 1980s, but the Management Board’s failure to follow the dictates of its own management plan allowed the stock to become overfished once again.

The Management Board’s failure to adopt a clear, consistent and, most importantly, certain approach to achieving the needed reduction in striped bass fishing mortality at its February meeting illustrates why the ASMFC management process is in need of real reform. While some Management Board members are trying to bring that reform about from the inside, they have been unable to overcome the resistance of others who feel well-served by the status quo.

Thus, we should look to Congress, who can compel the ASMFC to adopt management plans likely to end overfishing, that set clear catch limits for recreational and commercial fisheries, hold fishermen accountable when such limits are exceeded and, when necessary, rebuild overfished stocks within a reasonable and clearly stated time.

Unless such reforms are put in place, expect ASMFC-managed stocks to languish, and some Management Board members to continue to envision success as an overfished stock that is still in decline, but not declining as quickly as it had before.