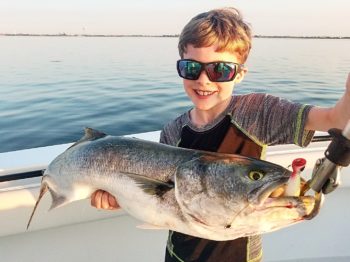 They’re both premier inshore gamefish of the New England and mid-Atlantic coasts. They frequently prey on the same schools of bait, with the bluefish slashing through the harried forage, while the bass follow beneath, feeding on the dead and the wounded.

And they’re both overfished.

But that’s where the similarities end, because the primary responsibility for managing striped bass and bluefish belong to two different fishery management bodies, that operate under different laws, take different approaches to fishery management, and have very different records of success.

Striped bass are managed by the states, through the Atlantic States Marine Fisheries Commission’s (ASMFC) Atlantic Striped Bass Management Board (Bass Board). Every coastal state between Maine and North Carolina, including Pennsylvania and the District of Columbia, along with the Potomac River Fisheries Commission, National Marine Fisheries Service (NMFS), and United States Fish and Wildlife Service, have one vote on the Bass Board. Each of the states has three representatives on that board, which must include a state fisheries manager, who serves as the administrative appointee, a legislative appointee, who often appears by proxy, and a governor’s appointee. Although there are some exceptions, the legislative appointee’s proxy and governor’s appointee are typically not professional fisheries managers, but instead fishermen or people connected in some way to the fishing industry.

When any matter comes before the Bass Board for a vote, the members of each state delegation first caucus, with each member taking a position on the issue in question. The position taken by a majority of members in each state’s caucus decides how that state will vote on the issue (in the event that no majority position emerges, the state will cast a “null vote” that has no effect on the final decision).

The ASMFC’s Interstate Fisheries Management Program Charter (Charter) states that fishery management plans “must include conservation and management measures that ensure the long-term biological health and productivity of fishery resources under management,” that such plans “shall be designed to prevent overfishing,” and that in the case of overfished stocks, “programs shall be designed to rebuild, restore, and subsequently maintain such stocks so as to assure their sustained availability in fishable abundance on a long-term basis.” It also states that “Conservation programs and management measures shall be based on the best scientific information available.”

However, there is no statute that legally obligates the ASMFC to adhere to the mandates set forth in the Charter, and in 2010, a federal appellate court found that ASMFC’s fishery management actions were not subject to judicial review. As a result, the ASMFC’s various species management boards have very broad discretion to act as they choose, even if such actions are completely arbitrary, contrary to the Charter, or ignore the clear requirements of a fishery management plan.

Thus, in 2011, the Bass Board took no management action after being warned in a stock assessment update that striped bass would become overfished by 2017. In 2014, it failed to comply with an explicit provision of the management plan that required the Bass Board to initiate a 10-year rebuilding program to restore the female spawning stock biomass, which had declined well below the target level in the face of rising fishing mortality.

The Bass Board received formal notification that the striped bass stock was both overfished and experiencing overfishing when the final version of a benchmark stock assessment was presented at its April 2019 meeting, although it became aware of those problems when the initial version of the assessment became public six months earlier. The assessment’s findings triggered additional provisions of the management plan that required the Bass Board to end overfishing within one year, and rebuild the spawning stock biomass in no more than ten years.

In October 2019, the Bass Board adopted management measures intended to end overfishing by reducing fishing mortality by 18 percent, but it has yet to take any action to rebuild the stock within the next 10 years. Even the measures adopted at the October meeting, a one-fish bag and 28 to 35-inch slot limit on the coast, and a one-fish bag and 18-inch minimum size in Chesapeake Bay, will probably not be implemented by many states; as a result the planned 18 percent fishing mortality reduction will probably not be achieved.

That’s because the ASMFC embraces the concept of “conservation equivalency,” which allows states to adopt regulations other than those proposed by the Bass Board (or other species-specific management board), so long as those regulations have the same conservation impact on the stock as those preferred by the Bass Board. It makes sense in theory, but runs into problems in practice, as conservation equivalency can result in neighboring states adopting regulations which work at cross-purposes. And because the Bass Board-approved rules will have a different impact on each state, depending on the characteristics of its particular fishery, conservation-equivalent rules can frustrate the goals of the management plan.

The Bass Board decided to adopt a slot limit rather than a fixed minimum size. The virtue of such slot is that it protects the older, larger females that produce more and more viable eggs than do smaller fish; the virtue of the rejected 35-inch minimum size is that it would protect females that were just recruiting into the spawning stock for a couple of years, and allow them to spawn for a couple of years before recruiting into the coastal fishery. But conservation equivalency allows some states to adopt slots, protecting the big females while catching the smaller ones just entering the spawning population, while allowing other states to adopt regulations that result in big females being killed while protecting the younger fish. In such situation, both the smaller, younger members of the spawning stock and the larger, older fish would be vulnerable to harvest at some point during their migration, and the effectiveness of the states’ regulations would be compromised.

In addition, the Bass Board decided that conservation-equivalent regulations only have to match the 18 percent coastwide mortality reduction, and not the actual reduction that the slot limit would have achieved in a particular state. In New Jersey, where anglers land more striped bass than they do in any other coastal state, the Bass Board’s preferred slot probably would have reduced fishing mortality by at least 40 percent. But, because New Jersey is only required to reduce striped bass mortality by 18 percent, its regulations can be far less restrictive than the slot limit would have been. As a result, the likelihood of achieving an 18 percent coastwide reduction is significantly reduced.

And we won’t know what sort of action the Bass Board will take to rebuild the spawning stock biomass for more than two years after that, as any rebuilding measures will probably be included in a new amendment to the management plan, which the Bass Board will just begin working on in May 2020. There is even a substantial chance that, instead of adopting measures to rebuild the biomass to the target level within 10 years, as the management plan requires, the Bass Board will “fix” the rebuilding problem by reducing the biomass target and overfishing threshold, instead of increasing the number of striped bass in the ocean. Such reduction has already been suggested by Bass Board members, who argue that the existing biomass target is unrealistically high.

Thus, when the entire process is over, there is no guarantee that measures adequate to reduce fishing mortality to the target level, or rebuild the biomass to its target, will be adopted by the ASMFC.

Bluefish, on the other hand, are primarily managed by the NMFS, pursuant to advice received by the Mid-Atlantic Fishery Management Council (Council). Both management bodies have a legal obligation to comply with the provisions of in the Magnuson-Stevens Fishery Conservation and Management Act (Magnuson-Stevens). The ASMFC manages bluefish in state waters, but generally follows the Council’s lead.

In late August, a newly-released operational stock assessment revealed that the bluefish stock was overfished, and that recreational landings were higher than previously believed.

In October, the Council, along with the ASMFC’s Bluefish Management Board (Bluefish Board) set a 2020 catch limit that would reduce landings for both the commercial and recreational sectors and assure that overfishing did not occur.

In late November, NMFS provided the Council with formal notification that the stock was overfished, so at the Council’s December meeting, it and the Bluefish Board authorized scoping hearings for a rebuilding amendment that must be completed in time for the 2022 season. The amendment must contain measures likely to rebuild the bluefish spawning stock biomass to the target level within 10 years.

At the same meeting, the Council and Bluefish Board cut the recreational bag limit from 15 bluefish to three for anglers fishing from shore and from private boats, and to five for those fishing from for-hire vessels. Such bag limits will apply in all federal waters. States may propose alternative, conservation-equivalent rules, but such rules would not apply in federal waters, nor would they apply to for-hire vessels with federal bluefish permits.

Thus, less than four months after learning that bluefish were overfished, the Council and Bluefish Board adopted commercial and recreational regulations intended to constrain recreational landings to the target level, and began work on a 10-year rebuilding plan. Thanks to the clear requirements of Magnuson-Stevens, the Council and Bluefish Board were able to quickly address the problems besetting the bluefish stock.

On the other hand, more than a year after learning the results of the benchmark striped bass stock assessment, and more than seven months after such assessment was officially released, the Bass Board has taken no action to initiate the 10-year rebuilding process required by its own striped bass management plan. The Bass Board has adopted a plan to return fishing mortality to the target level, but because of loopholes attributable to conservation equivalency, that plan will probably fall short of its goal.

It illustrates why the NMFS’ record of ending overfishing and rebuilding overfished stocks is so much better than the record of the ASMFC, which has never in its history succeeded in rebuilding even a single fish stock and subsequently maintaining that stock at sustainable levels.

It also illustrates why a law such as Magnuson-Stevens, that compels fishery managers to adopt effective conservation measures, is so critical to the success of the fishery management process.