Warming water has brought an abundance of black sea bass to the northeast, like this one caught by Lucia Wong of Cambridge, MA, which she caught when fishing with Capt. Dave Monti.

Two initiatives underway in the U.S. House are making the fish very happy at years’ end: Rep. Jared Huffman’s (D-CA) national listening tour and the Climate-Ready Fisheries Act sponsored by Rep. Joe Cunningham (D-SC). The spirit of both of these efforts embodies the non-partisan, inclusive, and science-based approach that has been the cornerstone of successful fisheries management in the U.S. Both initiatives will help us grow fish to abundance so there are more in the water for all to catch, eat or release.

Chair of House subcommittee reaches out to fishermen 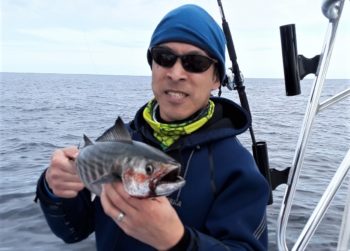 Jamie Wong of Cambridge, MA with a 21” bonito caught in November off Newport, RI. Climate change has brought warm water bait and fish to the region for longer periods of time.

A panel of scientists and fishing industry leaders met with Rep. Huffman, who is chair of the Water, Oceans and Wildlife Subcommittee of the House Natural Resources Committee, in Maryland on Friday, November 15 at his third listening session on the Magnuson-Stevens Act, the federal fishing law of this nation. The congressman held a fourth listening session on November 22 in Seattle, Washington, and two previous listening sessions in California. The panel of fisheries experts and stakeholders at the listening sessions had a detailed, technical discussion of current and future challenges in federal fisheries management and explored potential solutions.

Tony Friedrich, president of the American Saltwater Guides Association who participated in the November 15 Maryland session, said, “I was one of eight to ten people participating, some commercial and recreational fishermen, but most were fisheries scientists.” Other recreational fishing representatives included Capt. Paul Eidman of New Jersey, and Charlie Witek, Esq. recreational angler and fish advocate from New York.

The listening tour is a part of Huffman’s efforts to foster a more transparent and deliberative process for developing natural resources legislation. The input from this listening tour, and from other stakeholder outreach will inform his introduction of a Magnuson-Stevens reauthorization bill next spring. Through this comprehensive and inclusive approach, Huffman hopes to continue the historically bipartisan character of marine fisheries policies, including prior successful Magnuson-Stevens reauthorizations.

Friedrich said, “It was great for Rep. Huffman to solicit our input. Key issues discussed included climate change and how to handle shifting stocks, as well as the desire of recreational anglers to be accountable for the fish they harvest while still being concerned about current recreational data not being accurate.”

The major issue discussed at the event was the Atlantic States Marine Fisheries Commission’s (ASMFC) inability to manage fisheries in state waters. Friedrich said, “All at the table wanted the ASMFC to be more accountable and manage fisheries more like fish are managed under the Magnuson-Stevens Act, which means no conservation equivalency without consequences, and adherence to allowable catch limits and rebuilding time lines. The ASMFC record is dismal.”

Charles Witek, recreational fisherman, fish advocate and writer, said in an April 10, 2019 Marine Fish Conservation Network blog post, “While federal fishery managers, guided by the Magnuson-Stevens Fishery Conservation and Management Act (Magnuson-Stevens), have already rebuilt at least 45 once-overfished stocks, ASMFC has only rebuilt a single stock, Atlantic striped bass, since it was created in 1942.” Anglers made the point that the most recent striped bass stock assessment has revealed that even striped bass are once again overfished and subject to continued overfishing which precipitated a mandated 18 percent reduction for 2020.

Rep. Huffman said in his listening tour press release he plans to hold one public forum in each of the regions managed by fishery management councils. The Marine Fish Conservation Network is working with Huffman to identify events where listening sessions could occur in other regions such as New England and the Gulf.

Last year our oceans absorbed 93 percent of the heat our carbon emissions trapped in the atmosphere. The ocean would never release all this retained heat at once, but if the heat stored in the world’s oceans since 1955 was instantly transferred, NOAA relates the atmosphere would warm by 65 degrees F.

With accelerated warming Rep. Joe Cunningham has introduced the Climate-Ready Fisheries Act of 2019, bipartisan legislation to help fisheries manage the current and anticipated impacts of climate change on the fish. Th Marine Fish Conservation Network supports this bill. At the time of this post, thirteen members of Congress have signed on as cosponsors of the bill. And, it looks like the spirit of the bill may be incorporated in other fisheries bills moving forward. The Climate-Ready Fisheries Acts outlined below sets the table for how future Magnuson-Stevens Act reauthorization bills will help fishermen cope with climate change impacts.

The Climate-Ready Fisheries Act of 2019 directs the Government Accountability Office (GAO) to examine what actions have already been taken by fishery managers, identify whether any knowledge or funding gaps are hindering action, and provide recommendations for how we can better adapt fishery management, and prepare fishing industries and communities for the impacts of climate change. It also directs the GAO to offer recommendations for how Congress can enhance our nation’s science and management systems to better address climate change impacts.

So, as this year winds down, things are ending on a positive note for fish, fish abundance and fishermen.