As 2019 comes to a close, the future of our federal fisheries policy looks like it’s heading in the right direction for 2020. Representative Jared Huffman (D-CA), who is chair of the House Subcommittee on Water, Oceans and Wildlife, began his nationwide tour in October to listen to the opinions and perspectives of those who are most closely tied to the health and abundance of fisheries and marine environment. Chairman Huffman’s efforts to crisscross the nation are paying off with meaningful, in-depth discussions and insights into current and future challenges on the water, and how tweaks to marine policy may help bolster an already successful fisheries management law. 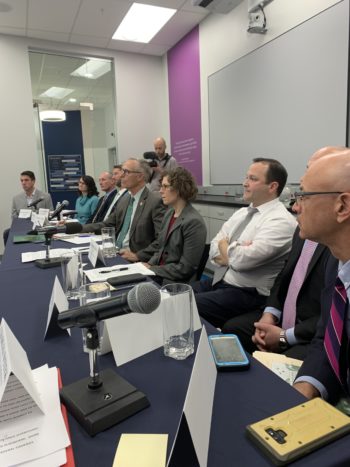 The tour of roundtable discussions kicked off in California in early October, with the first session in the chairman’s home district in Arcata and the second in San Francisco. In November, Rep. Huffman held a listening session in the mid-Atlantic region at the Baltimore Aquarium facility center and one in association with the Pacific Marine Expo in Seattle, WA.

Each session gave a panel of local stakeholders, including commercial and recreational fishermen, environmentalists, seafood dealers and culinary experts, an opportunity to voice their concerns and support for current fisheries management, while also sharing their views on how the MSA can meet the challenges ahead. Several of our Marine Fish Conservation Network partners, including Noah Oppenheim (Pacific Coast Federation of Fishermen’s Associations), Charles Witek (attorney and writer), Pam Lyons Gromen (Wild Oceans), Paul Eidman (Menhaden Defenders) and Linda Behnken (Alaska Longline Fishermen’s Association), were invited to sit on the panels and they expertly represented the Network’s views at these events. Rep. John Sarbanes (D-MD) attended the Baltimore event, and three other members of Congress, Rep. Suzan DelBene (D-WA), Rep. Pramila Jayapal (D-WA), and Rep. Ed Case (D-HI), joined the panel in Seattle.

Some common themes emerged from the discussions.

Participants consistently voiced that the Magnuson-Stevens Act has been providing long-term opportunities and financial security for people who depend on healthy oceans and productive fisheries, including those who catch and sell fish, provide recreational opportunities for anglers, serve freshly prepared seafood to eager customers and promote tourism. They felt that future changes to the law should build upon its success and not reverse the current course. People have seen the benefits of responsible and accountable fisheries management, and they agreed that science-based catch limits should be set in place to avoid overfishing the resource. Any changes should adhere to the philosophy that a conservation-minded approach is the right approach.

Climate change is a game-changer

As we’re learning more everyday about how climate change is creating a “new normal” across planet Earth, people on both coasts are seeing tangible impacts on the water. Warming oceans are causing fish populations to move north seeking the cooler water temperatures in which they thrive. Once common commercial and recreational fish are far less, or in some cases, far more abundant than normal – in some areas, fishermen are seeing species that would never have swam in those waters decades ago. Since fisheries management and allocation decisions are often made based on historical catch, climate change is throwing a new wrinkle in fisheries management.

Other impacts of climate change, such as ocean acidification and sea level rise (and the subsequent changes in water salinity), will also affect the marine environment and the health of fish populations that fishermen target. Rising sea waters will also greatly affect existing coastal infrastructure in working waterfronts around the country. Many participants voiced that marine policy needs to anticipate and address these changing ocean conditions, now and into the future.

We need more (and better) scientific information, monitoring and accountability

It’s hard to accurately set catch limits without knowing how many fish are out there and how many fish have been caught. Better commercial and recreational catch data, stock assessments, and monitoring could help fishery managers increase catch in abundant times, while stopping and correcting overfishing much more quickly. The funding, resources and capacity for better data and assessments must be driven by explicit policy directives, which is where lawmakers should step in to mandate these fishery management tools.

Most fishermen want to be held accountable for catch limits if it means more abundant catch – and more profits and fishing opportunities – for all. The majority of participants felt that the Magnuson-Stevens Act should maintain the accountability measures already written into the law.

People who participated in the listening sessions were appreciative of Chairman Huffman’s leadership and in seeking their expertise and years of experience before proceeding forward with the next reauthorization of the Magnuson-Stevens Act. The implementation of this law creates tangible impacts on the water, and DC policy solutions should be reflective of the real-life situations that people face on the water and in our fishing communities. Chairman Huffman clearly understands the benefits of public participation in the reauthorization process and is taking the task of listening to the diverse array of people for whom this law affects the most very seriously.

The two-hour discussions were by no means limited to just these issues. Other topics raised during the listening sessions varied by region and in range from fishery disaster relief and forage fish management to freshwater habitat and aligning Atlantic States Marine Fisheries Commission management mandates with those under the Magnuson-Stevens Act. Overall, these discussions raised many vital issues that are important to health of our marine environment, our fishermen and the coastal communities.

Chairman Huffman will be planning additional listening sessions in other regions of the country in the New Year. We thank Rep. Huffman and his staff for their time and efforts with these listening sessions and look forward to his continued leadership and additional robust roundtable discussions in the future.