Read the second part of this two-article series.

It was with great joy that I commercially fished for salmon this summer in Bristol Bay, Alaska, and for a very personal reason. I had returned after a hiatus of some twenty years to help a friend establish a shore-based, family-friendly commercial setnet camp for his youngest son and family—essentially, a fish camp for my friend’s grandchild, now a toddler. My friend 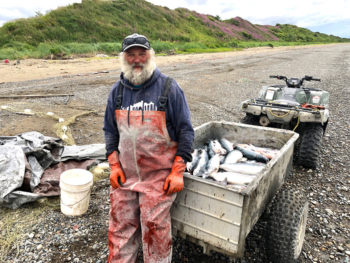 and I go back nearly forty years, having met during my inaugural 1980 Bristol Bay herring and salmon seasons.

Before coming to the Bay (as we often call it) I had fished for salmon in the Puget Sound waters and off the coast of Washington State, where salmon numbers were already diminishing from the cumulative harmful effects of logging, farming, which required river water for irrigation, dams, roads that changed how streams flowed, chemical toxins found in rivers from many sources, more people building more houses, and cities spreading larger and larger. In 1980, Bristol Bay had none of these, and my overwhelming feeling was: we still have time to do things right here.

Salmon fishing in Bristol Bay has existed for time immemorial, as my Native American colleagues say. Or, for at least 4,000 years, as calculated by the 2016 Bristol Bay Watershed Assessment undertaken by the Federal Environmental Protection Agency (EPA). The Bay is a very real story of humans and salmon joined in a sustainable relationship that has persisted for millennia, and if cherished and managed well, will be maintained for the foreseeable future. Could we even be so bold as to say this will be the way of Bristol Bay forever?

Upon my 1980 arrival into the Bay, this breath of abundance and sustainability was soothing to my soul, and gave me the confidence to invest in the Bay with my own fishing operation. Bristol Bay became a focus for much of my life from then on. Yes, that first season in 1980 was a life-changer.

Spin the clock forward to 2019, and now the very flourishing existence of the Bristol Bay fishery is facing an existential moment. A stunningly small number of much too-powerful people are doing their damnedest to get federal and state agencies to approve a permit to operate a gold/copper/molybdenum mine in the heart of the Bristol Bay watershed. If permitted, this mine, aka the Pebble Mine, or Pebble, will be a game-changer for the Bay. 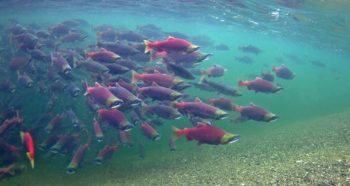 Sockeye salmon in Lake Illiamna in the Bristol Bay watershed

With the mere sweep of a pen approving a mine permit, or a deal during a private meeting between President Trump and Alaska Governor Dunleavy, Pebble may permanently change Bristol Bay’s thousands-of-years history and future of the sustainable relationship between salmon and humans.

On the shores of the Nushagak River, my friend and I fished, and were thankful for the gift of over 20 million sockeye salmon surging upriver, with our aging bodies just up to the task. The Nushagak’s 20 million fish contributed mightily to the nearly 54 million salmon returning to this Bay of their birth. Just as we returned to where we had fished for so many years.

In addition to developing a legacy fishing camp, we are collaborating on value-added salmon products from the Bay. My friend, with Wildfish Marketing; me, with Forever Wild Seafood. We rely upon salmon from Alaska’s Best, the world’s only Fair Trade Seafood certified salmon processing plant, also on the Nushagak River. Bristol Bay’s salmon run deep in our business culture. Stay tuned for salmon jerky, available soon.

What can be better than this? In our graying years, dedicating time, energy, funds, aching bodies and still-strong spirits to develop a fish camp for the children of children. Investing the same into value-adding businesses based on the astounding abundance of the Bristol Bay salmon runs—did you hear that the 2019 season catch was the second largest in recorded history?

We’re investing in the Bay’s future, embracing a seafood system that guarantees all fish and folk are treated fairly—what a concept for these days that we find ourselves in. We’re counting on this fishery being sustained far into the future.

This brings tears of joy, and may they flow forever, alongside the clean, cold, ecologically-rich rivers of Bristol Bay.

I’d like to recommend watching “Salmon, People and Pebble Mine,” two interviews with Alan Boraas, Ph.D., professor of Anthropology at Kenai Peninsula College and lead author of “Traditional Ecological Knowledge and Characterization of the Indigenous Cultures of the Nushagak and Kvichak Watersheds, Alaska,” which was submitted to the Environmental Protection Agency as part of the Bristol Bay Assessment. The interviews speak on the importance of salmon and clean water to the people of the Nushagak and Kvichak watersheds.

4 comments on “Tears of Joy: A Bristol Bay Free from Pebble Mine”