We Are Bristol Bay 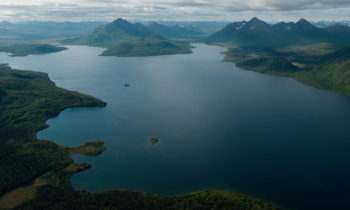 There are many faces in the Bristol Bay area, and we are joined by thousands, if not millions more, who eat Bay salmon, earn income from the fishery and food system these salmon supply, and who are on record as informing the EPA that they support life, the salmon, the fishery in the Bay, not the toxicity of Pebble Mine. We Are Bristol Bay, we are legion, and we are joyful! Check out some of the many faces of the Bay in this “sea-swallow’d” video.

But wait… Bristol Bay is under threat by the development of the Pebble Mine. What is this all about? A gold/copper/molybdenum mining claim in the heart of Bristol Bay, smack dab in the middle of the world’s most prolific sockeye salmon ecosystem on the planet? How can this be? Who’s behind this horror story?

The spokesperson for the Pebble Mine speaks comfortably—one could say casually, no, even glibly—of how the mine will change the Bay’s waters and landscape without affecting the Bay’s salmon ecosystem. Peer-reviewed assessments by scientists beg to differ.

“In conclusion, as fishery scientists and resource managers, we are concerned that the DEIS [Pebble Mine Draft Environmental Impact Statement (DEIS) released by the U.S. Army Corps of Engineers (USACE)] will clear the way for a project whose impacts to highly valued fisheries and the watershed were not adequately evaluated and therefore cannot be adequately considered, reduced, or mitigated. We do not believe the impacts and risks to fish and fish habitat have been fully described and we disagree with many conclusions reached based on the available data and ecological knowledge. Bristol Bay’s unimpaired watersheds and sustainable commercial, recreational, and subsistence fisheries represent an exceptionally rare resource of national and global importance. The potential scope of the project is so vast that it would forever alter the Bristol Bay region and its fisheries resources, including the extraordinarily prolific and all-wild salmon fisheries. Consequently, until an acceptable scientific evaluation can be completed and reviewed, we recommend the No Action Alternative as the best path forward.”

Comment letter from American Fisheries Society (AFS), the Western Division of AFS, and the Alaska Chapter of AFS. “AFS represents over 7,500 professional fishery scientists and resource managers who work in the private sector, in academic institutions, and in Tribal, state, and federal agencies. Our common mission is to improve the conservation and sustainability of fishery resources and aquatic ecosystems by advancing fisheries and aquatic science and promoting the development of fisheries professionals.”

Seven Generations — my Native American colleagues have taught me to think of the future in this way. It’s certainly a challenge to get a good grasp of the future, much less plan for it. And it gets downright brain boggling if we try to wrap our minds around the concept of forever. So, instead, let’s think in terms of seven generations, or roughly 200 years, calculating 30 years per generation.

It is with ease that I can envision the Bristol Bay salmon running abundantly for the next 200 years—and effortlessly I can envision this going on for time immemorial—if we only let them do so. On the other hand, I can’t, for the life of me, envision the toxic residue from a Pebble Mine being safely contained in a reservoir for forever, much less 200 years.

The arrogance of anyone calmly proclaiming that the toxic aftermath of Pebble Mine will be confined and taken care of forever… can this ever pass the laugh test? Isn’t this a proclamation more suited for the theater of the absurd?

The history of large hard-rock mining in the US is less than seven generations old. We haven’t even seen 200 years since the passing of the now woefully archaic and inadequate Federal Mining Act of 1972. Throughout our nation there are abandoned, unfixed mines leaking toxics into river systems. In the past five years, we’ve had three very substantial, poisonous blow-outs of so-called safe and durable dams holding back toxic mine waste slurry in their reservoirs, one in Canada, two in Brazil.

Do we have an example (at least one?) of a mining company managing its toxic aftermath for forever, for time immemorial? Much less being in business for seven generations, for 200 years? The landscape is littered with mines deserted by companies declaring bankruptcy, leaving clean up and restoration to the public. To learn more, go to EPA’s own Abandoned Mine Lands section of its Superfund Program.

We Are The Past Of Our Descendants

My Native American colleagues also say, “we are the past of our descendants,” another reminder of our current responsibilities. Yes, every day now we are making history for our descendants. Soon we will all become the story of their past. You Who Are Pebble Mine, what history will you gift your descendants? What relationship to the Bay do you want them to inherit? We Are Bristol Bay can answer this clearly: we choose life, choose salmon, for seven generations, for forever.

Join WE ARE BRISTOL BAY

To learn about Bristol Bay and the very real threat of the Pebble Mine, refer to these resources: