The National Saltwater Recreational Fisheries Summit sponsored by the National Oceanic & Atmospheric Administration (NOAA) Fisheries department was held March 28 and 29 at the Westin Crystal City hotel in Arlington, VA. One hundred participants throughout the country from the recreational fishing community (including myself) were invited with an equal number of observers participating in the two-day meeting.

The aim of the summit was to share information and perspectives on innovative management alternatives and approaches, uses of electronic data collection and reporting, socioeconomics and conservation actions to improve opportunity and stability. The summit also worked to identify opportunities for collaborative actions. 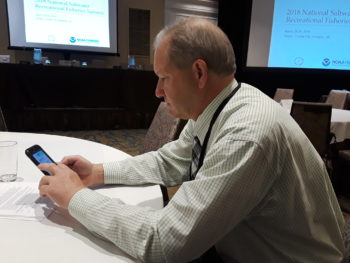 NOAA’s staff did a good job organizing the summit with Russel Dunn, NOAA’s National Policy Advisor for Recreational Fisheries, leading the way as summit organizer. Dunn made sure topics discussed focused on policies and programs that could be implemented under present law. Dunn said, “We ask that the focus of this summit stay on what we can do under the present Magnuson-Stevens Act to improve opportunity and stability in saltwater recreational fishing.”

When Dunn finished his remarks, William Shedd, president of the American Fishing Tackle Company (listed on the agenda as one of the keynote speakers), took the stage and said, “We ask your support of the Modern Fish Act (new legislation) to enhance recreational fishing.”

Lucas Smith, a charter captain from Louisiana, said, “I thought the remark (by Mr. Shedd) was inappropriate. The focus of the meeting was made clear by Russell Dunn, and then Mr. Shedd starts to push his political agenda.” No one else at the two-day summit, participant or speaker, mentioned new, proposed legislation.

Versions of the Modern Fish Act, mentioned by Mr. Shedd, have been introduced in both the House and the Senate. These bills aim to weaken the Magnuson-Stevens Act (MSA), the fishing law of this nation. They would allow timelines to be extended when anglers become inconvenienced by conservative harvest limits, putting the interests of rebuilding fish stocks behind those who want to take more fish for short-term financial gain.

Fortunately, after Mr. Shedd’s political comments, the summit was conducted in a constructive way by both speakers and participants.

Settling the score on seafood trade balance is scary 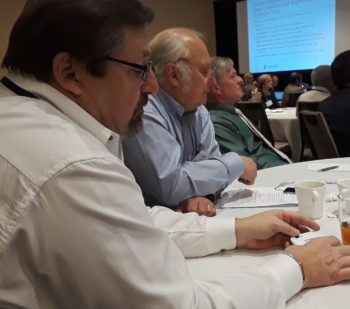 Ross continued to say his primary goal is to focus NOAA’s attention on the seafood trade deficit. “Ninety percent of the seafood we eat in America comes from foreign sources; most of it is imported seafood from aquaculture. So we are going to try to fix this.” Ross and Assistant Secretary Gallaudet aim to improve the fisheries trade deficit by increasing wild harvest and aquaculture.

Advancing aquaculture and wild harvest to make up the seafood trade deficit, however, has raised concerns. Pressure to enhance the trade balance could foster overfishing and could do damage to the fish and environment. Additionally, anglers at the meeting expressed concerns about the environmental hazards associated with large-scale aquaculture, as well as possible conflicts with wild fish populations in our oceans.

We need a strong conservation-focused Magnuson-Stevens Act to ensure the drive to enhance the seafood trade balance does not do permanent damage to our fish and environment.

The summit agenda was broken down into four key areas as noted below. It is important to note that recommendations in all four areas can be engaged under present MSA law with no modifications needed to the MSA to advance recreational fishing as outlined by participants at the summit.

Summit participants discussed better and more reliable catch and effort data via an improved Marine Recreational Information Program (MRIP), as well as electronic recording of catch and effort by recreational anglers on smart phones, iPads, tablets and computers. Anglers also suggested that NOAA encourage pilot projects utilizing existing exempted fishery permits (EFPs), which are issued under the authority of MSA for situations where research activities would normally be prohibited by federal fishing regulations. Fostering trust between anglers and management using innovation and collaboration was an additional goal that came out of summit workshop discussions.

Angler engagement in collaborative data collecting and electronic reporting of catch, effort and other data

The hope at the National Summit was that with NOAA-approved electronic data collection a more robust model would take some of the uncertainly out of recreational harvest limits, allowing anglers to take more fish. Other benefits of electronic recording would include the development of an electronic log book for captains to review to enhance future fishing, and a report on where certain fish are being caught, which would be helpful when planning for other ocean uses such as wind farms.

Participants thought it was important to make sure the data captured could be used in fisheries management. Recreational angler and charter captain Patrick Paquette of Hyannis, MA said, “The worse thing we could do is engage our fishing communities but not show them the benefits of recording catch and effort electronically.”

Dr. Luiz Barbieri, Marine Fisheries Research Program Leader from the Florida Fish and Wildlife Conservation Commission’s Fish and Wildlife Research Institute, said, “MRIP is tracking a very complicated survey. Recording catch and then doing an effort survey is very difficult. We had statisticians, some of the best survey professionals from academia, take a look at what MRIP was doing and they validated the approach. It is a very complex survey model.”

Managing for “abundance” was another key summit topic. Innovative approaches to enhancing habitat protection and restoration, the protection of forage fish, and reducing fish mortality rates were discussed. Presentations demonstrated enhancing fishing opportunity through conservation, including the use of barotrauma reducing devices that reduce mortality rates of fish that are caught and released.

Overall high scores for the Summit

In my view, the 2018 Recreational Fishing Summit was a big success. All of the key recommendations can be implemented today under present MSA law. The topics and presentations on key topics were all good. Now it will be a matter of prioritizing recommendations in a NOAA plan, performing due diligence as needed and implementing recommending in a timely manner.

Aside from comments made by Mr. Shed, and Secretary Wilbur Ross’s comments about his red snapper and New Jersey summer flounder decisions in 2017 no one else tried to politicize the event.