I had the honor and opportunity to represent recreational anglers during a recent trip to Washington, DC to advocate for strong conservation measures in the Magnuson-Stevens Act (MSA). I was armed with a report from the 2018 Southern New England Recreational Fishing Symposium and the support of the board of directors of the Rhode Island Saltwater Anglers Association (RISAA), sponsors of the regional event. 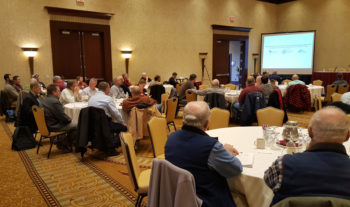 On January 26, 2018, over sixty anglers and fishery managers from Connecticut, Massachusetts and Rhode Island, along with MSA national thought leaders, worked to develop recommendations on how to improve MSA for recreational fishing. In additional to new ideas, many speakers and participants recommended keeping the strong conservation aspects of present MSA law.

All of the recommendations can take place under the present MSA. We just need to fund research, study and data collection efforts that can deliver on recommendations.

Why focus on MSA at the Symposium?

Recreational saltwater fishing plays an important role in Southern New England’s ecology and economy, as well as throughout the United States.

The ‘Fisheries Economics of the United States’ report published by the Department of Commerce and NOAA relates that recreational fishing in Rhode Island had sales of $332 million in 2015. The report says commercial fishing had sales of $290 million in Rhode Island and a total of $338 million once imported fish were added. Massachusetts’ situation is similar. Recreational sales were at $986-million and commercial sales at $861 million with sales of $1.13 million once imports are added.

But what most people do not realize is that, according to NOAA, although recreational fishing accounts for only 2% of the landings nationwide, it has a far reaching and sustainable impact on our society. Nationally, recreational fishing represents over $89.5 billion in sales and value added to the economy, and 439,242 jobs.

With this economic impact, it is vitally important that the nation and Southern New England manage this resource to abundance so that recreational fishing can continue to thrive in a highly sustainable way and continue to serve as a primary economic engine of growth.

Congressional delegations and members of the Senate Commerce Committee with whom I met last week appreciated hearing from Southern New England anglers and have pledged to use the Symposium report and our input when they address MSA legislation.

Top scoring directions from group work at the Symposium

Speakers and panelists (see speaker guide and agenda at Rissa.org ) first addressed participants and then had an open panel discussion with questions from other panelists, the facilitator, as well as participants attending the Symposium. Participants then broke into eight work groups of 6 to 8 people in each group and were asked for their input on what they might recommend to enhance the Magnuson-Stevens Act for recreational anglers.

Here were some top recommendations made by Symposium participants.

US Senators, Representatives and members of the Commerce Committee I met with in Washington, DC all appreciated and supported the recreational angler input on MSA recommendations. Now we need other voices to join in to ensure that Congress moves forward to keep an effective MSA with strong conservation measures.