Early on a Saturday morning Capt. Charlie Donilon of Snappa Charters and mate Lauren Benoit picked up nine passengers in Newport. It was a foggy morning, with big rollers from an ocean storm pushing the boat forward through the East Passage in front of Castle Hill Light and into Newport Harbor. I was along for the ride to meet Lauren and her fellow mates and experience another Capt. Charlie Donilon first. 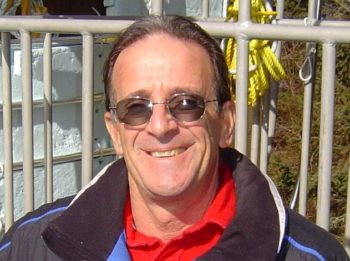 Capt. Charlie Donilon of Snappa Charters in front of one of his shark diving cages.

Women mates in the charter industry are an anomaly, even today. I was on board to meet and interview mates Lauren Benoit, Katie Viducic and Claire Hodson.

I met Katie three years ago at Capt. Donilon’s mate school. She was an instructor, and Capt. Donilon’s first woman mate. She helped to attract Lauren and Claire to serve as they are or were all University of Rhode Island graduate students.

We pulled out of Newport Harbor as Charlie explained the sites to his customers. “The granite walls of Ft. Adams are three to four feet thick to repel cannon fire.” “That’s Ida Lewis Yacht Club; she saved 18 people as a light house keeper. Many of them were a bit tipsy when returning to their vessels from town.” “Did you know a million pounds of TNT was stored on Rose Island during the war?”

Lauren, a West Greenwich resident, has a master’s degree in Oceanography and works doing research for NOAA. I asked why she wanted to be a mate. “I have a broad skill set but never knew how to fish, so learning to fish was important. And above all I wanted to learn more about sharks. I wanted to catch, tag and release sharks, and Charlie Donilon is a pioneer and expert in this area. Sharks were my specialty in graduate school,” said Lauren. 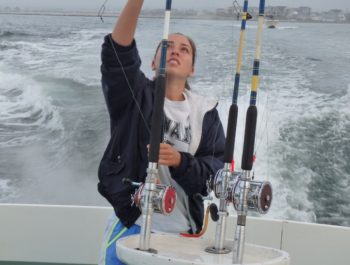 Mate Lauren Benoit prepares the vessel and gear for a day of fishing on Snappa Charters.

Customer John Cinti, who organized the charter, was getting married last weekend at the Inn at Castle Hill. He asked about job demands. Lauren said, “I work, go home, eat and sleep and do the same thing the next day. It’s a demanding job so I try to stay in shape and workout at the gym.”

Cinti said, “I like the idea of women mates because they are easy to talk to, and Lauren’s fisheries expertise helped inform me and my friends about the fishery here in Rhode Island.”

Mate Claire Hodson of West Hartford greeted us at the dock as we returned from Newport. She was taking the next charter as the Charter Vessel Snappa often does two trips a day. Capt. Donilon said, “I need to do 120 trips a year just to break even with the fuel, bait, insurance and boat payment costs.” So he expanded his business to do ash burials at sea, shark cage diving, photography, harbor, lighthouse and windmill tours.

Hodson said, “I wanted to be a mate on a charter boat to experience people interacting with the environment and be part of that … I also like going fishing and not knowing what you are going to catch.”

Capt. Donilon is an advocate and big supporter of sustainable fisheries and all the good the Magnuson-Stevens Act has done to rebuild fisheries. “One might think that I’m in the wrong business. I hate to kill fish,” said Capt. Donilon. “But some customers want to take the fish to eat and I totally understand this. Last year we had about 300 shark contacts and we tagged about 143 of them. I say ‘contact’ because we did not kill one shark and this included nine mako sharks.” For more on Capt. Charlie Donilon’s catch-and-release, see the previous blog post on fish tagging featuring Capt. Donilon and two other captains.