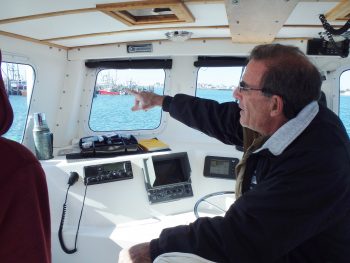 Capt. Charlie Donilon at the helm on Snappa, his charter vessel, where he and his clients have caught, tagged and released over 2500 sharks.

“I can remember the exact moment I decided to start tagging rather than killing sharks. I was showing my wife a video of a 720-pound mako we caught and killed that day. We hooked up; the fight ensued with the fish making some spectacular jumps out of the water. It was all very exciting,” said Capt. Charlie Donilon of Snappa Charters, Pt. Judith, Rhode Island.

“We got the fish close to the boat; we harpooned it and then hit it with the flying gaff. There was blood everywhere… on us, the boat, the fish. It wasn’t a pleasant ending to the video. My wife looked at me and said, ‘You don’t like killing things, why kill fish like this?’ I said, ‘you’re right, I don’t like killing things.’ So that was it, from then on I decided to tag sharks rather than kill them.”

Over the years Capt. Donilon and his clients have tagged more than 2500 sharks with about a ten percent return ratio, meaning anglers that recapture the shark with the tag returned to Donilon. Normally the return rate is about three percent. “Our return rate is so high because we make sure the shark is not gut hooked to enhance the chances that it lives when we set it free. If hooked in the gut we put a stick down its mouth into its belly with a ‘V’ cut on the end that usually catches and dislodges the hook before we set the fish free.”

Donilon is an advocate and big supporter of sustainable fisheries. “One might think that I’m in the wrong business. I hate to kill fish. But some customers want to take the fish to eat and I totally understand this. With other species we take fish conservatively but not with sharks; we do not take any, as I believe they are endangered.” 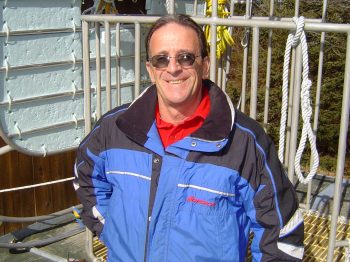 Capt. Donilon said, “I can remember I had six guys on board one day. They were all excited about shark fishing. They all wanted to kill a shark.” But, one by one, Capt. Donilon talked them out of it. He convinced them that they should tag and release as it was a great contribution to science and the sharks.

Donilon is an accomplished charter captain and conservation minded at the same time. He use to have about 60 shark trips a year; since he instituted the no kill policy shark trips have reduced to about ten per year. Donilon believes his job is to educate fishermen about saving sharks. He has diversified his business to make up the difference doing light house and ocean wind farm tours at Block Island, conducting ash burials at sea and working a variety of special events.

Donilon sees a fascination in the eyes of those that hire him to shark fish. “There is something about sharks that attract people; it might be the excitement… the danger… perhaps the image of them as bad. Customers just want to get close to them, to reach out and touch them.”

In recent years Capt. Donilon in conjunction with the University of Rhode Island, has been attaching transmitters to the dorsal fins of mako sharks as part to a research project. The transmitter allows scientists to track fish. I asked if he thought anglers would like the idea of attaching transmitters to sharks. (I had visions of my brother-in-law coming over and showing him the travel patterns of the shark I caught a year and a half ago.) Charlie said, “The technology is not there yet. Each transmitter is about $2,000, and it is very dangerous to bring a mako on board to attach a transmitter even with well experienced scientists and crew. Their teeth are razor sharp. Maybe someday but now yet.”

Snappa Fishing & Diving Charters has been involved in the business of sport fishing for the past 40 years; their web address is www.snappacharters.com. 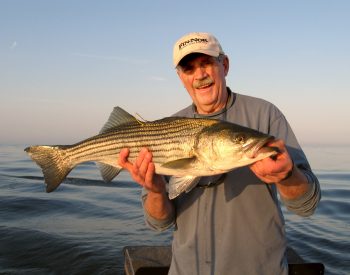 Capt. Al Anderson of South Kingstown, RI with striped bass. He is the tagging king: over 60,000 gamefish in his career have been tagged.

A few years ago Al Anderson, former captain of the Galilee-based charter boat Prowler, was inducted into the International Game Fish Association’s (IGFA) World Fishing Hall of Fame for his career tagging of nearly 60,000 game fish for science. Capt. Anderson is also an author of several books and hundreds of fishing articles.

He was the first New England charter captain ever to be so honored by the IGFA. Anderson became a USCG Licensed charter captain in 1967, and credits his clients who supported his “conservation for science” ethic by assisting with his fish tagging activities.

Anderson has won several conservation awards for tagging bluefin tuna, striped bass and other species. In February of 2015, the IGFA held their fifth annual Legendary Captains and Crew Awards (LCCA) dinner and recognized Anderson’s lifelong commitment to fish conservation as a charter captain. The primary criteria for receiving the award are that the captain or crew member must have provided leadership in their trade and have earned the respect of their peers by making a meaningful contribution to the sport of recreational angling over time.

Capt. Anderson made a career out of taking people fishing and tagging fish. He is truly a legendary charter captain. 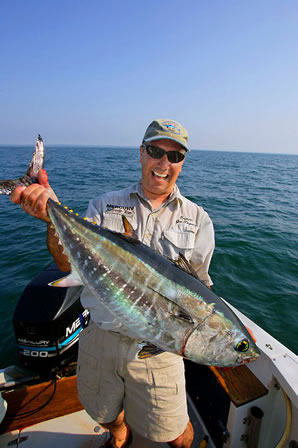 Capt. Joe Pagano of Stuff-It Charters with a tuna.

Capt. Joe Pagano of Stuff-It Charters is no wimp. In 1991, he caught the second largest fish in the world ever landed by rod and reel! It was a 2909-pound, 15 1/2-foot long Great White Shark off Pt. Judith, Rhode Island.
As the Stuff-It Charters website says, “Don’t expect to catch a one-ton fish on the average trip, but year in and year out customers land over 650 striped bass weighing over 20 pounds, as well as dozens of stripers that are 40+ and 50+ pounds, and hundreds of striped bass in the 10 to 20 pound range. Seventy-five percent of striped bass and other fish are released after their capture.”

“We advocate for catch and release with customers. I hate to see them take fish, have them filleted and then at the end of the day say they have too much. So we have a discussion up front with clients, advocating for conservation before we leave the dock. However, often times the customer advocates for catch and release like my good client Brian Albano,” said Capt. Pagano.

Dr. Brian Albano is a practicing podiatrist from Providence, Rhode Island. He has scheduled ten to twelve trips a year with Capt. Pagano for the past ten years. Dr. Albano said, “I first learned about tagging striped bass from Capt. Al Anderson of the Prowler. We would fish next to him and he would tag everything large and small. I generally tag legal size fish and hope anyone recapturing the fish releases it.”

“Tagging fish is very gratifying, particularly when you get a tag back. In 2007 we tagged a striped bass and two years later in 2009 we caught the same fish, about six inches larger. We tagged it and released it again,” said Albano. Capt. Pagano said, “We caught that fish in the same spot, off Pt. Judith Light, so this is proof that these fish return to the same spots year after year.”

Visit Stuff-It Charters at www.stuffitcharters.com. By the way, Capt. Pagano is a taxidermist, thus the name “stuff it.” Presently most of his striped bass taxidermy customers are requesting hand painted and molded fiberglass mount molds rather than taxidermy. Catch your fish, measure its length and girth, weigh the fish and release it. Send the information to Capt. Pagano and he will build a mount for you that is so life-like you will swear it is a real fish.