Starting next week, ASMFC is holding Menhaden Amendment 3 hearings… and we need to be there.

I’m not going to wax this time about how recent aggregations of menhaden have created extraordinary conditions for fishermen targeting striped bass, sharks etc., or all the other life the massive pods have drawn, most notably the whales. 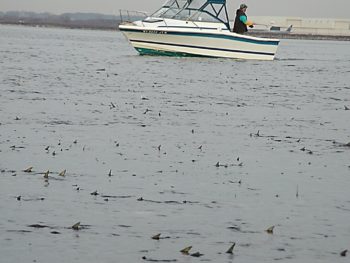 This photo and top: menhaden school, photos via John McMurray.

It’s become pretty obvious that menhaden are coming back not just in the Mid Atlantic, but also well into New England, and not just to those of us who spend time on the water… It’s been all over the news.

Having spent a large amount of time on and around such schools, I can say first hand that it’s been pretty darn cool…

But there are no assurances it’ll stay that way. In fact, I should be clear that there’s a well-organized effort to ensure it doesn’t… but we’ll cover that in a minute. First…

Why do we have all these bunker?

It’s pretty simple in most people’s minds. It’s because we really just started managing them.

While a lot of states pushed the big reduction boats out of state waters, and there was a cap (set so high didn’t really do much) put in place for the Chesapeake Bay reduction fishery in 2006, the coastal menhaden fishery was, for all intents and purposes, unregulated all the way up until 2012.

After well over a decade of advocacy by angling and environmental groups, the Atlantic States Marine Fisheries Commission (ASMFC) finally constrained menhaden removals, reducing then-existing harvest levels by 20% in 2012.

What we’re seeing now is undoubtedly a stock expansion. The growth of the menhaden population seems to have resulted in the repopulation of at least some of their historical range, going back before high-volume/low-value fisheries for menhaden started knocking the crap outta them.

It’s a common-sense explanation… If you leave hundreds of millions more fish in the water, then of course the stock will do better and expand.

But it isn’t accepted by everyone…

The menhaden industry, for one, has argued that the 20% reduction has had nothing to do with current abundance, that the largest fishery on the east coast has no impact on the menhaden population, and that recent growth is solely the result of new environmental conditions.

Unfortunately, the fact that scientists can’t put their finger on a “stock recruitment” relationship has given that argument cover, and there are some managers who believe it as well.

But let’s move on…

How we got here 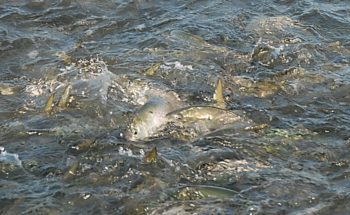 While there were some warning signs in a 2015 benchmark stock assessment, it made clear the stock was not “overfished” and that “overfishing” was not occurring.

Unfortunately, the “single species” technical analysis based on that benchmark assessment indicated was that managers could raise the menhaden quota by a good 40% and still not overfish, and that is NOT good.

The glaring problem with the benchmark assessment is that in no way did it account for predator needs. In other words, sure, we could possibly remove another 40% without crashing the stock, but what about leaving enough in the water for the things that eat them?

So… Given that greatly flawed single-species stock approach, ASMFC after a lot of debate compromised with industry and increased menhaden quota by 16.5% over the last two years.
Yet, with such an increase, the Commission also voted to initiate Amendment 3 to the Menhaden Fishery Management Plan, which is largely focused on developing and establishing “ecological reference points” (ERPs). In layman’s terms, that means a full consideration of those predator/prey relationships when managing menhaden harvest.

Amendment 3 seeks to address a few other important issues. First and foremost is state allocation. Right now, Virginia has 85% of it, because that’s where the last remaining large-scale/low-value reduction fishery is – where fish are caught in very high volume and “reduced” (boiled down) into fish oil, fishmeal, etc.

New Jersey has 11% of the allocation with the existence of a significant bait harvester in that state, which supplies mostly the lobster fleet. The rest of the states have scraps. There are certainly options in Draft Amendment 3 that seek to rectify such inequity.

And lastly there are options on whether the Commission will maintain the above referenced Chesapeake Bay Cap, remove it, or reduce it.

Where we are now

In November and December 2016, ASMFC held a series of public hearings soliciting input on the Amendment 3 Public Information Document.

For those of you who showed up, or submitted written comment, THANK YOU!

One more set of public hearings will be held throughout the East Coast over the next month.

A vote on Amendment 3 and a decision on whether or not we manage menhaden based on its role in the ecosystem rather than its maximum harvest potential will take place in November in Baltimore.

So, this public comment period is really the last crack for the recreational fishing community to be heard, and by far the most important one as far as swaying your state Commissioner’s vote.

YOU NEED TO SHOW UP! This is pretty darn important if we want these bunker concentrations to be a consistent occurrence.

The official public hearing announcement along with times and places can be found here: Menhaden Hearing Announcement.

While there are a number of issues in Amendment 3, managing them for their place as prey for striped bass, bluefish, whales, dolphins, etc., is by far the most critical for us.

With that in mind, we first and foremost should support ISSUE 2.6 REFERENCE POINTS – OPTION E: “BERP Workgroup Continues to Develop Menhaden-Specific ERPs with Interim use of 75% Target, 40% Threshold.”

What this means is that ASMFC implement a widely-accepted general forage “rule of thumb” approach in 2018, until menhaden-specific ecosystem reference points are completed.

Such an approach entails the common sense idea of maintaining a lot of menhaden in the ocean, specifically managing for a target biomass of 75% of an unfished stock, and we’d have to take management action should the stock fall below 40%.

This is a reasonable, generally agreed upon way to manage important forage species around the globe, with wide scientific consensus.

Industry and some managers will undoubtedly ask for Option B: “BERP Workgroup Continues to Develop Menhaden-Specific ERPs with Interim Use of Single-Species Reference Points.” We should NOT support this approach.

A group of scientists has been working on, and continues to develop, menhaden-specific ecosystem reference points. But, they WILL NOT be ready by the completion and implementation of Amendment 3 in 2018.

The working group is scheduled to complete menhaden-specific ecological reference points late in 2019. But even in the best-case scenario they still won’t be ready for management use for quite some time (by some estimates up to five years because they have to be formally evaluated through multi-model comparisons, simulation testing, completion of “management strategy evaluations”, etc.).

In the meantime, it is almost a certainty that the Commission will be pressured every year by industry, which will point to single-species technical advice that ignores predators and will instead push managers relentlessly to raise the quota by up to 40%! And you can be sure there will be incremental increases every year, which will likely result in a coastal abundance decline.

So it’s really important that we have this interim “general rule” of 75% target and 40% threshold.

The Bay Cap and state allocation

Generally, I stay out of allocation issues, particularly as they are related to states. But there are so many things wrong with giving one state – for all intents and purposes, one company in VA – 85% of the overall quota, and having so much of the catch concentrated in one area. That needs to change, and it can by taking some percentage away from VA and reallocating it to the coastal states. That said, I don’t really have a preferred option here.

However, regarding the Chesapeake Bay Cap, I do.

Re 4.3.7 Chesapeake Bay Reduction Fishery Cap, we should support Option B: Cap Set At 51,000 metric tons, which represents an approximation of the five-year average of reduction harvest from the Chesapeake Bay between 2012 and 2016.

This is a big reduction from the current 87,216 metric ton cap, which is largely ineffective because the reduction industry has never come close to it. As it stands now the reduction fishery could DOUBLE their catch in the primary nursery area for menhaden.

So really, this is a protective measure, and a critical one at that.

You need to attend a public hearing in your state. Once again, here is the link to scheduled hearings: Menhaden Hearing Schedule.

Your testimony should be simple (although try and put all of this in your own words):

I support Issue 2.6 – Option E: interim use of 75% target, 40% threshold, while the workgroup continues to develop menhaden-specific ecosystem reference points.

It’s the quickest and best way to do something we should have done a long time ago, which is to manage these fish for their value as prey.

The menhaden resource is very important to the recreational fishing community. Entire time and area aggregations of recreationally important species, as well as whales, dolphins, seabirds, etc., are the result of historically relevant of menhaden concentrations. And so they should be managed for the public trust rather than for a few small special interest groups.

You should also probably mention that you support Chesapeake Bay Reduction Fishery Cap, Option B: which sets the cap at 51,000 metric tons, because the Chesapeake Bay is a critical nursery area for menhaden and striped bass and other species, and one we can’t afford to allow an increase in harvest in until we know well the tradeoffs.

And it certainly wouldn’t hurt to mention that you support a more equitable state-by-state allocation of the menhaden resource.

If you can’t attend a public hearing, you can submit comment in writing up until October 20th. Such comment should be sent to Megan Ware, FMP Coordinator at comments@asmfc.org, with the subject line: “Draft Amd. 3.”

It’s important that the recreational community, particularly those of us that depend on menhaden, be heard on this one.

This is your chance.

3 comments on “On Bunker, It’s Time To Show Up”