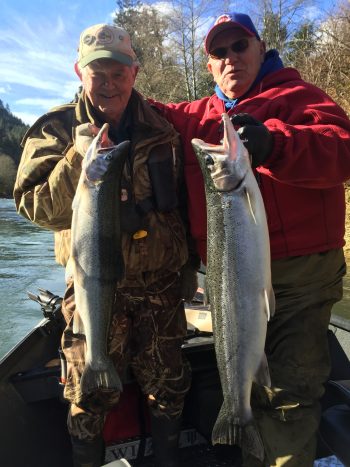 I had the good fortune to get a little culture in my life this week. One benefit of moving from a tiny town in coastal Oregon to “the Big City” was the diversity of opportunities that exist within these crowded city walls, such as the opportunity to see the play, “Astoria.” I’ve heard from numerous fishing clients of mine how great Peter Stark’s book Astoria was, and it wasn’t just because I spend half of my fishing season there. I also prefer to learn my culture through auditory/visual versus reading a book; call me lazy. Maybe just a date away from the house and the 8-year old was a bit of a motivator too?

Anyway, the play was great, the story even greater.

I was always a big fan of Meriwether Lewis and William Clark; those guys were my heroes. An optimist, such as a fishing guide has to be, can’t help but wonder what the landscape really looked like in the 18th century. What would it have been like to troll a herring in the lower Columbia with the tools we have now and the knowledge of how to harvest fish. No angler can deny it; we’d all sacrifice Facebook and our smartphones for a year, for just a week’s worth of fishing in peak season on the Columbia River in 1705. Hurry up and build that time machine.

Given the recent rush of executive orders, and recent picks for cabinet positions with the current administration, I think the crowd looked at this performance with a different point of view than they would have in the past. My wife certainly did.

She noted that there was only one woman cast in the performance, likely very characteristic of the day. The cast was also dominated by white men (see previous observation). But the most pointed observation she made was that this team of explorers were determined to become fur trapping barons, retire with an abundance of wealth, and maybe less of a motivating factor, stake America’s claim on the wild, wild on behalf of Thomas Jefferson. The entire scheme was funded by John Jacob Astor, a businessman, real estate mogul and investor, who would later become America’s first multi-millionaire. My wife was surprisingly shocked that the fur trapping trade was wide open for exploit. I had to respond, “They could plead ignorance back then, but we don’t have that luxury today.”

Yes, we’re racked with regulation, and yes, it’s for a good reason. If I had my 25 foot Alumaweld with two Mercury motors, a set of Lamiglas rods, Trilene fluorocarbon line and Mustad hooks with a case of blue label herring back in 1705, there’s no way I could control myself. I’d be one of those pioneers that laid claim to having so many salmon, they put them in their gardens to fertilize their vegetables.

Limitless abundance, no regulation, the sky’s the limit. OK, time to wake up.

I’m pretty sure no one, no matter how buried in the sand their heads are, thinks our natural resources are limitless anymore. The days of knowingly overfishing are hopefully over (hence my, “we can’t plead ignorance any longer” comment), but that history book is only a little more than two decades old. You think it’s hard predicting populations of fish that return to our rivers, well then how the heck do you do it in the deep blue sea, especially with population ranges that go from the Gulf of Alaska to the US/Mexico border?

In this new Congress, the Magnuson-Stevens Act is likely up for grabs. There has already been legislation introduced that rolls back the provisions that got us to where we are today. Oregon’s coastal ports are certainly way more alive with activity during the shoulder seasons, when salmon aren’t available close to shore. Charter boats that used to make their living off of summer salmon were forced to diversify, chasing sea bass and lingcod, while us guides shifted from salmon to sturgeon. How’d that story end up? Charter boats now make the bulk of their living off of bottomfish, and this 20-year veteran fishing guide is now part-time, after building my business on the backs of sturgeon, which no longer sustains a consumptive opportunity. With the disappearance of that consumptive opportunity went my business, all in a short 20-year time span. That’s a pretty short shelf life for a fishery that’s been around for 200 million years.

It’s been an inspiring week for sportangling proponents in Oregon this week. With the direction the Oregon Fish and Wildlife Commission took last week to continue to allow commercial gill net fishing and increase commercial fishing in the fall, anglers have come together in protest of broken promises and a compromise that won’t have big benefits to the recovery of the 13 stocks of Columbia Basin salmon and steelhead that remain on the Endangered Species List. We won’t need this army of anglers just for the Columbia River Fisheries Reform Policy, believe it or not, we’ll have even bigger things to work on in the not-so-distant future.

Can you imagine what John Jacob Astor would say if he traveled to 2017? He certainly would have stuck to real estate.