I have been working on river herring-related issues for the past 25 years and was one of the first anglers/conservationists to jump up and call attention to the fact that river herring were disappearing rapidly before our eyes. We are quite literally at the bottom of the river herring barrel, with the best available science telling us that we are at a mere fraction of the historic population. 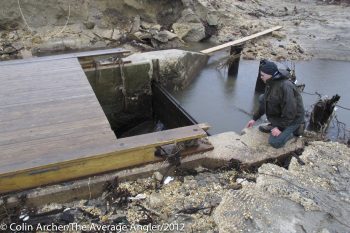 But what has really happened to our alewife and blueback herring? These vital forage fish continue to be decimated out at sea as bycatch in the squid, mackerel, butterfish and Atlantic herring commercial fisheries. The root cause is kind of like all the mom-and-pop hardware stores that have given way to warehouse chains. Many of the family-owned small dayboats that used to fish in moderation are gone. They have been replaced by giant pair trawling ships that use methods that are not sustainable. Day in, day out, these ships methodically strip mine the midwater zones of our coastal waters, keeping what they want and dumping overboard what they don’t. River herring aren’t yet recognized as “stocks in the fishery” so they fall thru the cracks, or in this case, just get shoveled and dumped over the side.

Sure, some corporate industrialized fishing interests fight back with the usual rationalization rhetoric stating the drastic downturn of river herring as being caused by habitat destruction, pollution and dams, climate change, etc., but anglers see the reality that tells us otherwise. Just a few decades ago, waters were even more polluted than they are now (and the dams have been there for over a century), and yet you could scoop up river herring all day long with no end in sight. Hang a little gold hook in the water and you had one. Guys had dozens of them in aerated kiddie pools in our yards, saving them to cast out and “live-line” and catch stripers! Very clear that the river herring were doing just fine, that is, until greed took over and the fishery shifted towards industrialization. We return to those very same waters now, and you are lucky to see a single fish.

Federal agencies that fall under the Commerce Department (NOAA and NMFS) have continued to stand by for years and watch as millions of pounds of fish are wasted, yet at the same time continue to spend millions to fund and support onshore habitat restoration and dam removal. Restoration on inland headwaters makes no sense if the slaughter at sea continues. We can continue our volunteer efforts and work on inland restoration, but it would be crazy to let the reality of what’s going on out at sea slip on by. (Pun intended) 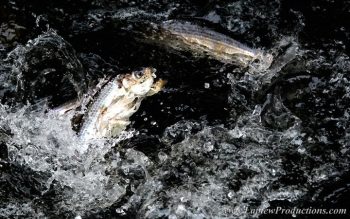 For all of the reasons above, Anglers Conservation Network has chosen to become a plaintiff in a lawsuit to get the Atlantic blueback herring listed as an endangered species. Specifically, the genetic subset of mid-Atlantic bluebacks that is highly imperiled at this time and directly impacts our gamefish and ecosystem here in New Jersey. The US Court system took up our case on February 16, 2017, and we hope to hear from the judge shortly. A win for us would be that the decision not to list the blueback herring will be remanded, or sent back. It’s not a clear win, but in the complex world of fisheries management, winning comes in a variety of shapes and sizes. I am compelled to say that District Court judge Randall Moss restored my faith in the federal justice system. He was clearly well prepared and did his homework on this matter and was enthusiastic about making sure that this little smelly fish was treated fairly.

For me, this was another milestone event in my forage fish “career.” I have been through this before, as this is the 3rd lawsuit in the last 6 years that our organization, Anglers Conservation Network, has been a plaintiff. Working with attorneys from Natural Resources Defense Council (NRDC) and Earthjustice, along with Delaware River Shad Fisherman’s Association, Great Egg Harbor Watershed Association, Gateway Striper Club and Philip Lofgren Herring Warden of Weymouth MA, we have filed these actions against NOAA, NMFS and the Department of Commerce.

Until now, the efforts of the federal government’s defense teams to prevent herring from either becoming designated as a “stock in the fishery” or as an endangered species have succeeded, always due to finding some technicality to defeat us. In any of these suits, all we are asking them to do is to do what the law requires them to do, conserve and manage fish. Leave enough fish in the water to play the role as food for other species. 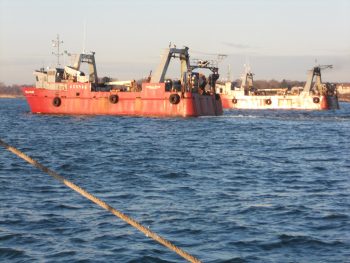 As I was sitting in the courtroom, all I could think of was that at this very moment, pair trawlers are dumping dead river herring overboard, without consequence, same as yesterday and the day before that. Yes, we are in the final innings of the river herring game, and unless we do something drastic they will not make it and neither will the other creatures that depend upon them for food.

I would like to hold out a little hope as Mother Nature has proven to be quite resilient in the face of the stupidity of humans. We will go on record as anglers fighting on the right side of history, but I can’t help but wonder why we need to resort to filing a lawsuit to get the federal agencies to do what they are supposed to do in the first place?

6 comments on “Endgame for Blueback Herring”