Cod fishing is good off the Rhode Island coast. Contraire to what is being experienced in the Gulf of Maine, cod fishing for recreational anglers off Rhode Island has been very good the past three years. Recreational fishing boats have been returning to port early as anglers have reached the ten fish/person/day limit with a minimum size of 22″.

These fine market cod were caught by Amy McCubrey and Tom Eldred of Charlton, MA fishing mid-January aboard the Seven B’s party boat off Rhode Island.

The quantity of fish has improved. Most are not huge fish, but the size is now starting to get larger too. This is a great fishery for charter and party boats and private anglers that are keeping their vessels in the water during late fall, early winter as well as spring and early summer. I fished last month, and there were twenty party and charter boats fishing in the same area from Rhode Island, New York, Connecticut and New Jersey.

Capt. Andy Dangelo of the Seven B’s party boat, Point Judith, RI said last week, “We had about 120 fish on board by 10 a.m. and then the fishing shut down.”

Capt. Frank Blount owner of the Frances Fleet party boats said, “Saturday was an off day. We boated about 24 fish but had explosive days earlier in the week with over 300 fish. Overall we had a wild week of local cod fishing. The cod fishing experienced Sunday, Tuesday and Thursday was about as good as it gets. The majority of the fish were ‘gaffers’ in the 7 to 12 pound range, and there were some bigger ones that made it to nearly 20 pounds. These are the highest quality, high yield kind of cod fish stuffed with herring and mackerel.”

“A couple of years ago we wouldn’t be having this seminar on small boat cod fishing close to shore because there were no cod,” said Capt. B.J. Silvia of Flippin Out Charters, Portsmouth, RI at a seminar he and fishing partner Greg Vespe gave last year. The fall bite has been good for the past three years. Anglers are catching cod close to shore when tautog fishing off Newport, at the East Fishing Grounds three miles off Block Island and further out in the Shark’s Ledge and Cox’s Ledge areas. 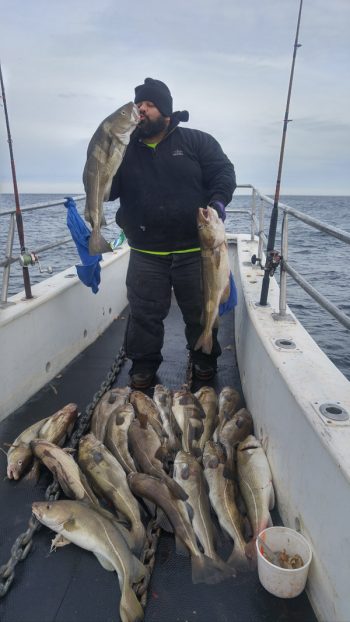 Justine Piper and Mike Braga from CT landed these twenty cod fish the third week of January on the Frances Fleet out of Pt. Judith, RI.

The Smithsonian National Museum of American History has an in-depth history on cod fish. According to the exhibit, “Two centuries before the arrival of the Pilgrims, explorers reported an abundance of enormous cod in the waters of present-day New England and Atlantic Canada. English explorer Bartholomew Gosnold was so impressed that he changed the name of Cape Saint James to Cape Cod in 1602.”

However, it wasn’t until the mid-1800’s that salt cod became an important element in early Atlantic commerce as immigrants came to America and needed to be fed.

When my father was a young man, Rhode Islanders caught cod from shore. An angler could catch as many as ten fish to sixty pounds from shore in one outing. Fishing from shore for cod is no longer possible. There are no cod that close to shore. Cod has received so much commercial fishing pressure over the years that they are no longer plentiful.

Additionally, cod are a cold water fish, and with climate change and warming water in the northeast (particularly in the Gulf of Maine which is warming faster that any of the body of water in the Atlantic) some scientists believe that cod are headed for deeper, cooler water.

Where to find cod

Cod are bottom fish that are basically lazy. They do not aggressively hunt, but instead they pretty much stay on the bottom, often near structure (underwater wrecks, rock piles, holes, humps and drop offs) waiting for prey to come by. So you have to go to where the cod are to catch them. They are not likely going to come to you.

I spoke with Capt. Rusty Benn, owner of the Seven B’s party boat, about cod fishing in the winter. Capt. Benn said,

“Early winter cod fishing has been pretty good. The cod have been left alone most of the season up until December, as anglers are targeting different species, so we find them pretty regularly right around Block Island.

“We like to fish an open bottom near structure. One of the biggest problems are dog fish. You catch a good storm from the Northeast and it pushes everything around. Before the storm you could have gone right to the cod because you knew where they were. Now (after a storm) you have to start from the beginning to find the cod without the dog fish.”

Rich Hittinger, 1st vice president of the RI Saltwater Anglers Association, has been cod fishing for more than 30 years off southeastern New England shores. Hittinger said, “Back in the late 1980s the species was plentiful and each trip was likely to be successful, but in the 1990s it seems that the commercial fleet was so successful at harvesting these tasty creatures that they left very few for the rod and reel fishermen. In the past ten years it has become much less productive to fish for cod, especially in early summer when we previously had been very successful.”

Anglers drift or anchor up to fish for cod; it depends what the fish are feeding on and whether they are dispersed or all in one place. Hittinger said, “In recent years we have been drifting because you cover more ground and are more likely to drift over a fish when they are spread out. In the past we used to find a good pile, carefully anchor on them and keep them in the area by dropping clam shells. This method proved to be successful on many trips.”

Cod fish is good for you too

The www.livestrong.com website says that cod, a cold water fish, is particular good for you. The site relates that, “Cod offers a good source of omega-3 fatty acids which helps lower risks of cardiovascular disorders including atherosclerosis. Cod also provides a good source of vitamins B6, B12 and niacin which factor into a reduced osteoporosis risk…”

State of the fishery

The recreational and commercial cod fishery is not in good shape overall. However, for some reason there seems to be more cod off RI waters than in the Gulf of Maine which has scientists wondering why.

Capt. Frank Blount, who serves as a New England Fishery Management Council advisor, was a council member for years and chairman of the Ground Fish Committee. He has been an advocate for fishermen on the subject of cod fish being caught in Rhode Island waters. Capt. Blount believes there are two cod biomasses, one north and one south of Massachusetts, he is advocating for NOAA to explore looking at cod fish in this way which might explain why recreational fishing activity for cod off Rhode Island has been so good over the past several years.

Overall the cod fishery is down. It is an example of a fishery that was over capitalized… fishing was great for years, so many entered the business of cod fishing; they bought larger boats with bigger engines that could go farther. Yet we had the same number of fish in the water. This along with enhanced technology to find the fish crushed the supply of cod from a fishery of abundance to a fishery of scarcity in most of the region.

This often happens when fish managers do not put the health of a fishery first. Often times fishing policy focuses on the needs of business interests that make money off the fish and succumb to pressures from political leaders that have the self-interests of their area at heart.

There is always hope that recent and future conservative fishing regulations under the Magnuson-Stevens Act will eventually help bring back the cod.

But for now they are biting pretty good for recreational anglers off Rhode Island.

1 comment on “I Kid You Not, Cod Fishing is Hot”