It’s a new year and time for reflection. I am thankful for the fish caught on my charter boat in 2016 and look forward to a good year in 2017. I think about the fish and how important it is to grow them to abundance so there are more fish for all to catch and eat. I realize in 2017, more than ever before, we need to push an agenda that puts fish – and the family fishermen that depend on them – first, and not the large industries and user groups that rely on the fish for financial gain.

In 2017 we need a fish-first agenda or someday there may be no fish left to catch.

We need to be active and talk about the fish to friends, family and government leaders. It is important that they know how passionate we are about the fish. To the best of our ability we need to make an effort to understand what is happening to the environment and the fish, and then take that second step of communicating it to others to impact policy.

What’s there to talk about when advocating for the fish?

Every day, scientists, fish managers, fishermen and fishing communities are discovering new and better ways to understand the fish, their environment and how to manage them to abundance. Initiatives like some of the ones mentioned below were made possible by a strong Magnuson-Stevens Act that gives NOAA the authority to manage our fish.

Climate change, warming water and its impact on the fish 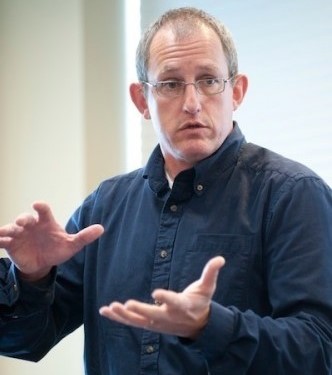 Climate change and warming water impact fish, but how fish react to it is important. Some species have the ability to move away from the effects of warming water and others don’t. Some species like the warm water and it produces greater abundance (like black sea bass in the northeast), yet others like cold-water fish leave the area if they can. Species that cannot leave become less abundant and could eventually disappear from the area (sea scallops and ocean quahogs).

A study released by the National Oceanographic & Atmospheric Administration (NOAA) early in 2016 titled the “Northeast Climate Vulnerability Assessment” sheds some light on how 82 species in northeast waters are impacted by climate change.

Dr. Jonathan Hare, one of the world’s most respected scientists studying climate change and its impact on fish, was the lead author of the study. He was recently appointed director of NOAA Fisheries’ Northeast Fisheries Science Center (NEFSC).

“Our method identifies specific attributes that influence marine fish and invertebrate resilience to the effects of a warming ocean and characterizes risks posed to individual species. The study will help us better account for the effects of warming waters on our fishery species in stock assessments and when developing fishery management measures.” said Dr. Hare.

The study further explains what is happening in the northeast with warm water fish being more abundant and cold water fish less abundant.

Ecosystem-based management is a priority 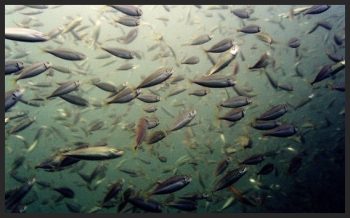 Atlantic menhaden, a species valued by commercial and recreational fishermen, are also valued as a forage fish and their ecological value. Photo from Save the Sound.

Historically, fish managers in this nation have managed fish species individually, one at a time. However, ecosystem-based fisheries management (EBFM) takes a comprehensive, science-based approach that looks at the broader ecosystem.

For example, in the northeast Atlantic menhaden and river herring serve as forage fish for striped bass, bluefish, tuna and other species. Atlantic menhaden also plays a big ecological role. They are filter feeders with each fish processing thousands of gallons of water filtering out algae in our oceans, bays and coves. Algae blooms can cause hypoxia (low oxygen levels in water) that can lead to fish kills.

NOAA’s website says Atlantic menhaden “play an important role in the ecosystem as both a forage fish for striped bass, weakfish, bluefish, and predatory birds such as osprey and eagles as well as serving as a filter feeder because they feed on phytoplankton and zooplankton at various life stages.”

So rather than just managing Atlantic menhaden to ensure they remain sustainable as a species, ecosystem-based management ensures that enough Atlantic menhaden are left in the water for other species to eat as forage fish as well as enough to fulfill their ecological role.

NOAA’s road map outlines steps the agency will take to advance the understanding of ecosystems, improve science modeling capabilities, better understand the needs of fishermen and incorporate these factors into the decision-making process.

We need to support NOAA, the regional councils, commissions and states to roll out ecosystem-based management so we can grow fish to abundance.

A new way to count fish 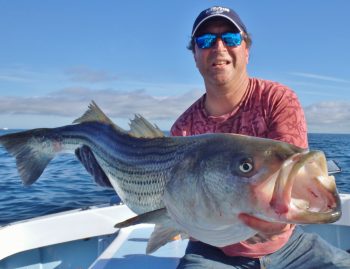 A strong Magnuson-Stevens Act allowed striped bass to grow to sustainable levels, like this one caught September, 2016 off Block Island by Steve Brustein of Maine on No Fluke Charters.

Scientific surveys of fish are often carried out by trawling. This means towing a net and then hauling it up to count the catch. Estimates are then made about how many fish of each species are in each square mile. They are generally done in the same area for the same amount of time on a periodic basis. They are costly to do; however, scientist may have found a new way to determine what fish are in the water.

Fish managers and scientists do not have the resources to do a proper job with survey trawls in our coastal waters, never mind areas outside our territorial waters (200 miles). Large tracts of the ocean are not monitored so we have no idea what fish are in the water globally, never mind how many are being taken out.

However, Philip Thomsen and his team from the Natural History Museum of Denmark, are developing a way to count fish that is far less costly. The team is examining fragments of floating DNA which fish slough off in slime and scales, or excrete into the water.

A November 19, 2016 Economist blog post said scientists “hoped they would be able to link the quantity of this ‘environmental’ DNA to those species’ abundances, as measured by the trawl,” a trawl survey conducted by the research vessel Paamiut that took place at the same time. “Given the fragmentary nature of environmental DNA, they found it easier to recognize families than species (a family, in this context, is the taxonomic level above a genus; herring, sardines and shad, for example, all belong to the family Clupeidae). The trawls picked up fish from 28 families. The team found DNA from members of 26 of these in their samples, and also detected three families that had no representatives entangled in Paamiut‘s nets.”

The technique has a long way to go before developed to the point that it can do an accurate census of the world’s oceans. However, Thomsen is on to something here with global markets and world fisheries growing. We need a reliable and inexpensive way to count fish so we can manage and grow fish to abundance.