Here’s something I thought I’d never do… After another fine shopping experience at my local Costco, I was feeling pretty proud that I got good value, on some good foods, for my family. That is, until I came across this story that tells me the double box of Honey Nut Cheerios is laden with pesticides, a carcinogenic pesticide for that matter, glyphosate, otherwise known as Roundup. Needless to say, I had to take this cancer-laced product back to Costco. I think I’ll print out this article to go with it, too.

And not just a little bit. The article states that, “Glyphosate residues were found in General Mills’ Cheerios at 1,125.3 parts per billion (ppb).” So what is a safe level of glyphosate to consume? Well, if you’re a rat, liver and kidney damage starts at 0.05 ppb. If you’re a fish, well, “levels as low as 10 ppb can have toxic effects on the livers of fish.” Man, I hope salmon don’t start biting on Cheerios. I just couldn’t keep justifying poisoning my daughter any longer, now that I have this information.

Then, I come across this article that states Roundup is the “Most Heavily Used Weed Killer in History.”

It doesn’t take a hydrologist to figure out where land-based chemicals end up. And the half-life of glyphosate? From Wikipedia: “The half-life of glyphosate in soil ranges between 2 and 197 days; a typical field half-life of 47 days has been suggested. Soil and climate conditions affect glyphosate’s persistence in soil. The median half-life of glyphosate in water varies from a few to 91 days.” Now I don’t know what the glyphosate concentrations are in fish, but given it’s taking more and more Roundup to kill noxious weeds on the landscape due to the resistance these weeds are building with use over time, and we’re gaining more and more mouths to feed, this doesn’t seem to be on a good trajectory. It’s just another example of how we as humans, are damaging the ecosystems that we have come to depend on most, we just may not know it yet.

West coast anglers have certainly heard the term that the decline of salmon is the result of a thousand cuts. That is certainly the case for this species and most species for that matter. With salmon having such a large home range, they are obviously more susceptible to being victimized by more “cuts.” Fish with smaller home ranges (i.e. many rockfish species, sponges, sea cucumbers, etc.) are not only less vulnerable to the multitude of threats that face salmonids, but they are more likely to recover faster, if their habitats are intact. That said, rebuilding plans for some species of fish are impressively long. Of course, that has a lot to do with the lifespan of such species. It wasn’t that long ago that we learned some species of rockfish, even though they may be less than 10 pounds in weight, can be decades old, maybe even nearing the century mark. This report from the Natural Resources Defense Council spells out the conditions of many populations of fish, and as you can see, we still have a lot to work towards: 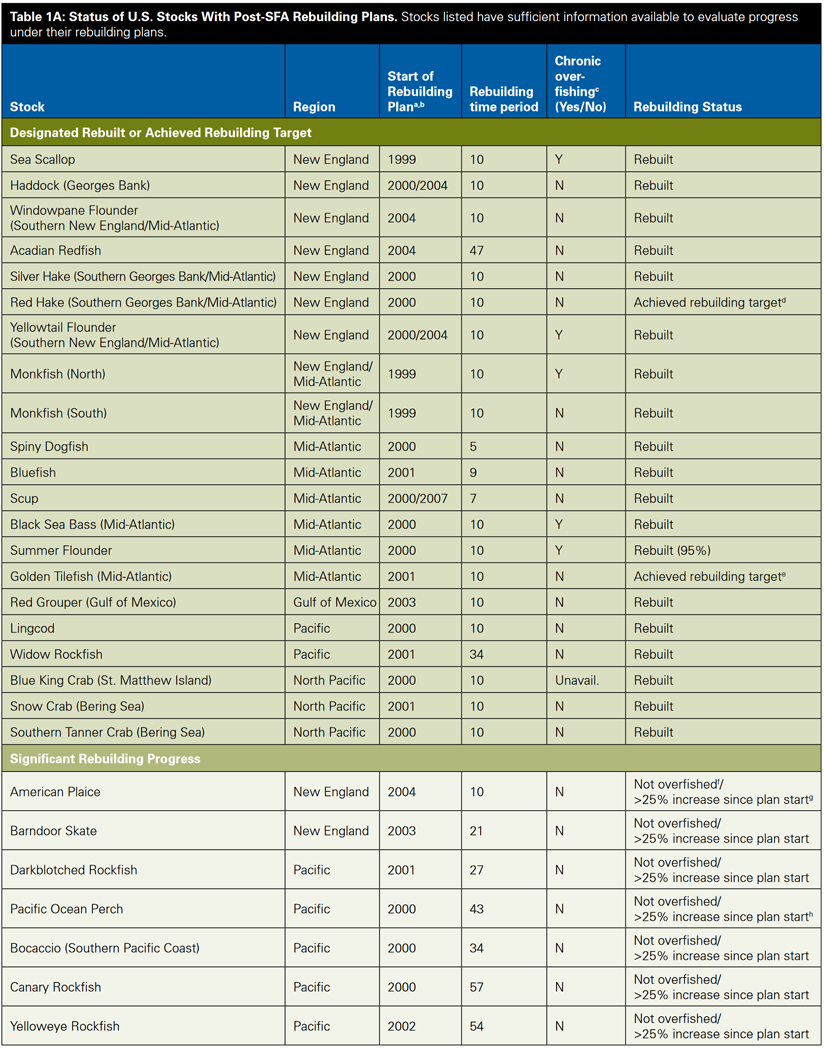 The decline of most species of fish is likely obvious: overfishing. During the time when the greatest amount of overfishing was taking place, we were sold a bill of goods that the ocean was immune to depletion. Time and time again, however, we’ve learned the lesson that we are fishing on a finite resource, our ecosystems are indeed fragile, and we don’t even know how future, currently unknown threats will affect the future of our fisheries. Why take risks?

Blogging on the human footprint on our fisheries has been an eye-opening experience. I get to take the time to learn about how humans and fish interact, and the cause and effect of our existence on planet Earth. I’m much more adamant about how I care for the land we live on and pleasantly surprised about how inquisitive my 8-year old daughter is on why we don’t leave lights on in the house, why I drive the Prius sometimes, instead of the 1-ton diesel, and why we recycle. We never know how we’re shaping our children’s lives until they get up and out on their own, and even though I’m still far away from being a great steward of Mother Earth, my hope is that my child is a better steward than I. She may have to be, by sheer necessity.

And what’s on tap for December? I’m heading down to our state’s capitol, to have a little talk with our Oregon Fish and Wildlife Commission to see what they think of a 20% harvest rate for the spawning population of herring in Yaquina Bay this winter. A commercial harvest of 20% doesn’t sound like a life-changing event, but in the midst of a dramatic collapse in sardine populations and the downturn in the anchovy population, harvesting 20% of the herring population that is spawning in Yaquina Bay may not be such a good idea.

Feel free to write the Oregon Fish and Wildlife Commission to let them know that even though herring are rebounding, likely due to decreased competition from other forage species, now may NOT be the time to remove a large portion of their population from the ecosystem when other critical forage species are in decline. After all, do you want your children to have to eat glyphosate-laced Cheerios? NO-THANK-YOU!