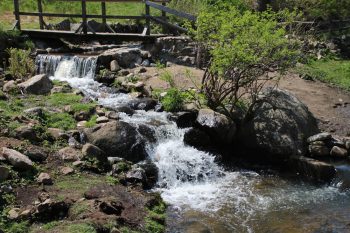 River herring are really two species, alewife and blueback herring. Both species make their way up creeks and rivers in the spring to spawn in fresh water; however, both spend the majority of their lives at sea. River herring are managed under the Atlantic States Marine Fisheries Commission’s (ASMFC) Shad and River Herring Management Plan. The ASMFC has jurisdiction on state waters out to 3 miles from the coast, which means the ASMFC plan does not manage river herring where they spend the bulk of their lives. To make things more confusing, unlike Atlantic or “sea” herring which spend time in both state and federal waters, ASMFC does not have a joint management agreement to address federal waters management.

Determining the health of river herring is just as confusing as their management. The ASMFC website explains that the last stock assessment determined that of the 52 stocks of alewife and blueback herring for which data were available, 22 were depleted, one was increasing and 28 could not be determined because the time series of data was too short. No one seems to dispute the final determination that the stocks are DEPLETED. ASMFC amendment 3 shut down harvest in all state waters unless a sustainable harvest plan was approved. Outside of Maine, where stocks are managed in a very hands-on method that is closer to fish farming than wild harvest, most in-river/state waters harvest has been closed for more than ten years. 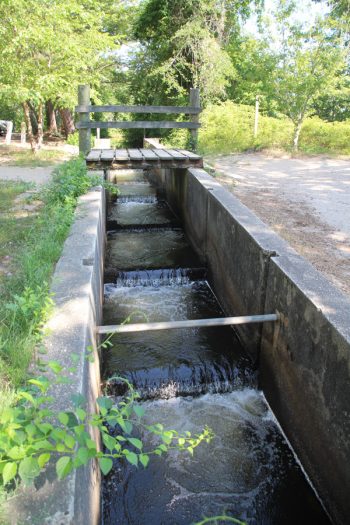 Federal agencies can’t seem to agree if river herring are in need of conservation and management. River herring have long been listed as a “Species of Concern” and the NOAA Fisheries Greater Atlantic Regional Office web site has some great language describing what is supposed to be a “Proactive Conservation Program.” Over the past 20 years, well above 25 million tax payer dollars and countless private funds have been spent improving river conditions via dam removal, restoration of spawning habitat and installation of fish ladders. Today the available spawning areas for river herring are more than double that of 20 years ago. Yet the species is in far worse shape today than in 1996. Apparently, this Proactive Conservation Program is only applicable to in-river conservation because when it comes to managing these fish at sea, NOAA/NMFS officials, both from the Northeast Fishery Science Center and from the Northeast Regional Office openly discourage management at sea at both the New England and Mid-Atlantic Councils.

Do you know what is different over the last 20 years? Over that same time period federal waters have seen development of the industrial bait fishery for both Atlantic herring and Atlantic mackerel. These two fisheries have been considered responsible for the largest amount of human caused mortality at sea, but no management body wants to hold onto this extremely hot potato.

The New England Fishery Management Council (NEFMC) does not have a management plan for river herring. Its poorly monitored industrial-sized Atlantic herring fleet (less than 25% of trips carry an observer) catches hundreds of thousands if not millions of pounds of river herring, and either discards them as by-catch at sea or sells the incidental catch of river herring mixed in with other non-target species (baby haddock and redfish) as lobster bait. Back in January of 2015, under pressure from the public and a related court decision, NEFMC went through a process and decided NOT to add river herring to the Atlantic Herring Fishery Management Plan. The council did, however, decide to revisit that decision in not less than three years. 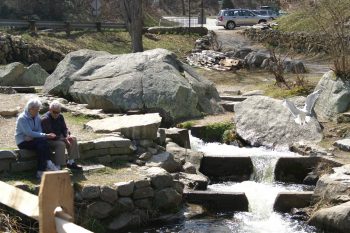 A herring run can provide value to people and seagulls, too. Photo by Diane Lomba.

Unfortunately, it appears it will be a lot more than three years because this past November (2016), NEFMC voted to not update a “white paper” which would contain information needed to revisit the decision. The NEFMC acknowledged its vessels catch, discard and sell river herring when it enacted a catch cap in the Atlantic herring fishery. Unfortunately, when the fleet approached the cap, the NEFMC simply used a different data set to justify raising the cap number. Despite over a million river herring being sold by vessels under its jurisdiction, NEFMC clearly does not believe it is responsible for the conservation and management of river herring.

The bulk of the Atlantic herring fleet also targets Atlantic mackerel under management by the Mid-Atlantic Fishery Management Council. Pretty much everything I wrote about the Atlantic herring fishery also applies to the Atlantic mackerel fishery. In October of 2013, the MAFMC voted NOT to add river herring to the Mackerel, Squid Butterfish Fishery Management Plan. Again, this decision was made while acknowledging the mackerel fishery sells an unknown but large amount of river herring mixed in with the mackerel when sold as lobster bait, and discards even more as by-catch. This past October (2016), the MAFMC did revisit their decision. Guess what happened? Of course the MAFMC decided it is not responsible for the conservation and management of river herring at sea. Of course they dressed up this horrible decision with a bunch of rhetoric about how much effort they were putting into an ASMFC high level thinking committee that is known as the Technical Expert Working Group (TEWG). I’ll get back to the TEWG in a moment. 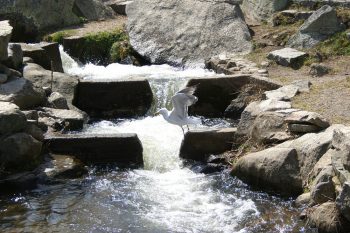 As I mentioned earlier, a significant influence in the decision to not manage river herring in federal waters by both NEFMC and MAFMC is the mixed messaging coming from the federal government. The NMFS Office of Protected Species puts out some great info graphics about river herring being a Species of Concern, but over and over again officials from NMFS make statements during council discussions that clearly indicate they do not support at-sea management. In addition, NMFS has recently approved increases in by-catch caps and decreases in observer funding needed to monitor the industrial bait fishery.

In 2011 the Natural Resources Defense Council filed a petition requesting river herring be listed and given mandatory protections required under the Endangered Species Act. NOAA Fisheries conducted a status review and in 2013 determined listing was not warranted. Regrettably, when it comes to finfish, the Endangered Species Act is pretty weak. ASMFC claims one management action did come out of this status review. In May 2015, the ASMFC and NOAA Fisheries released the River Herring Conservation Plan that was suggested by the River Herring Technical Expert Working Group (aka TEWG). I’m not sure what expertise advocates who work for the industrial bait fishery bring to the table but this new plan can be summed up in one phrase: “anything but at-sea management.”

Unfortunately those of us who remember spring gatherings to harvest a small amount of river herring have very little hope. I’ve said or written the following a hundred times… “If river herring had wings, they would have been managed at sea years ago.” It appears those of us that care will have to wait for a major change in the status quo…until some fisheries leader, until some federal judge or maybe even a rogue politician decides it’s time to end the game of hot potato and manage river herring at sea where they spend most of their adult lives.