Celebrate a Christmas Tradition with These Two Tasty Recipes

Some say the seven fish tradition is for the seven days it took to make the earth, others say it pays tribute to the last seven of the Ten Commandments, which relate to human interaction, and still others say it reminds us of the seven deadly sins. However, some in Italy do not have a tradition of seven fish but rather one of twelve fish (for the twelve apostles) or a thirteen fish tradition (for the twelve apostles plus one for Jesus).

As members of the fishing community, it’s nice to bring fish to our holiday table. Fish and fishing are such a big part of our lives, and it is one of the few natural foods we can catch, clean, prepare and eat much the way people have for centuries. 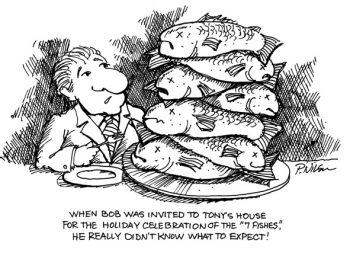 The Seven Fishes, by Peter Nilsen of Barrington, RI.

So, I like to eat and serve fish at Christmastime to honor the tradition of fish. Thanks to a strong Magnuson-Stevens Act and NOAA’s rebuilding of over 40 species, we can still enjoy the fish we ate centuries ago around the holidays.

What types of fish do people eat? My family often started with antipasto with anchovies (no meat), snail salad, fried smelts, baccala (dry cod fish preserved in salt that is soaked for days to get the salt out), stuffed squid in a red sauce over linguini, baked white fish (haddock, cod or hake), baked stuffed shrimp and stuffed quahogs.

Here are two of my favorite seafood recipes. The first includes three different fish in one dish. It uses a white fish such as haddock, hate or cod fish, which I prefer to use. Cod is now being caught by recreational anglers off Rhode Island. Scallops and shrimp are also part of the recipe. I call it Sandy’s Tasty Fish Casserole named after my good friend Sandy Ducharme, who has opened her home to me and others before, during and after the holidays.

Note: The Marine Fish Conservation Network endorses the use of sustainably-caught seafood in the U.S.

This is NOT a milky, gooey casserole but a lightly baked dish of rice pilaf, cod, sea scallops and jumbo shrimp. Sandy said, “It is a great recipe for entertaining because you can make it ahead of time and then just bake it prior to dinner.”

Cook rice pilaf as directed on package and set aside. Melt butter and mix with bread crumbs and set aside. Coat fish and shrimp (not scallops) with lemon juice, set on paper towel and pat dry. Place half of cooked rice pilaf on the bottom of a 9″ x 12″ baking dish. Place white fish on top of rice, sprinkle half of the butter/bread crumbs and cheese over white fish, place sea scallops and shrimp on top, place remaining rice on top of scallops and shrimp then sprinkle remanding butter/bread crumb mixture and top off with remaining parmesan cheese. Bake for 15 to 20 minutes at 350 degrees. Sandy said, “When the shrimp turns pink it’s done.” 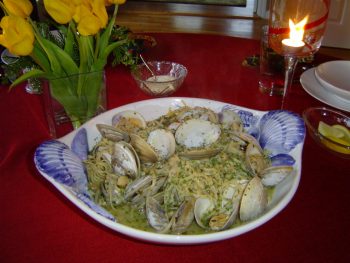 Scrub littleneck quahog shells thoroughly and put them aside. Cook linguine while making recipe. Heat extra virgin olive oil in heavy pasta pan over medium heat, cook garlic in oil until golden brown (about one minute). Add and stir in 1/3 cup chopped parsley and all the unopened little necks, let simmer for two minutes. Add wine and let simmer for one minute. Add lemon and the meat of six to eight large quahogs cut up and cleaned (extra quahog meat is optional; if I catch them I put them in). Add red pepper to taste. Cook for eight to ten minutes or until all quahogs are open. Discard quahogs that are not open. Lower heat and put in one pound of cooked linguini and toss the entire mixture, put into large pasta bowl, then garnish with four pinches of fresh parsley. (This recipe is a variation of one I first saw in the May 2002 issue of Bon Appétit magazine by Lori Demori.)