It’s fishing season, and I can’t say it’s off to a great start. I’ve digressed into telling my customers how it was in the “good ol’ days.” But really, we’re in the peak of the Buoy 10 fishery, and with 960,000 adult Chinook in the forecast, folks are pretty excited about their opportunities this year. 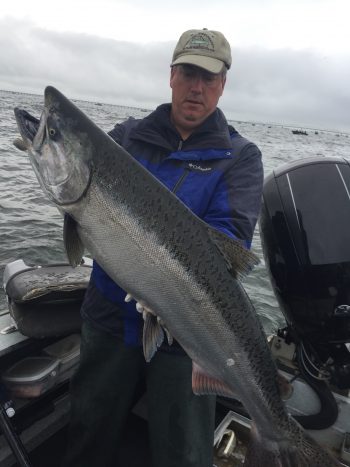 Most pros are stating that the fish are here, they just “aren’t biting all that good.” It’s certainly been a whacky ecosystem in the ocean this year: water temperatures are abnormally warm, the warm water blob apparently never left and coho numbers are crashing pretty hard these days. I guess we shouldn’t be all that surprised that what still appears to be a strong run of Chinook that have entered the river just aren’t responding to techniques and baits that have historically worked well. Last year, we worked ourselves into such a frenzy, that the Oregon and Washington State Departments of Fish and Wildlife had to close the fishery early to ensure we had an adequate enough tule Chinook escapement to ensure the long-term viability of the species. It’s caused these agencies to proactively manage the fishery more constrained this season, with the mandatory fin-clip rule on Sundays and Mondays.

Well, the Tongue Point area broke loose on Wednesday (8/10) with one of the best bites of the season I’ve seen so far. Although I’ve seen much better, it was pretty good, even though I had an extremely frustrating day of many bites, without much ending up in the fish box. I’ll chalk it up to what appears to be a strong component of smaller fish having a hard time getting my 5/0 hooks embedded into their jaw. I wouldn’t be a true fisherman if I didn’t have a scapegoat to blame my woes on now would I?

One of my guide buddies told me that the action was getting good at Tongue Point (about 4 miles upstream of the Astoria/Megler Bridge) around 9:00 in the morning. Since it appeared the short bite I was hoping to get in was fading fast, I decided to head on up there. I was about the 5th boat on the scene there, and a few nets were already waving. I went a while without any strikes but then I had 5 hits in about 5 minutes, yielding nothing of course. My luck resembled something of a bad-luck barrage of bananas. I was feeling a bit hopeless, and since my success story really doesn’t get any better than this, I’ll end the woeful strike-to-hook ratio story right there.

What was really amazing, however, was how short a time it took for what seemed like the entire fleet to also come up to Tongue Point and help in the harvest of the season that was currently taking place. In less than 1.5 hours, our 5 boat fleet expanded to 50 boats, and then 75, I am sure. The age of communication is upon us.

It wasn’t two hours earlier when a reporter for the Daily Astorian asked what I had seen change in the fishery over my 20 years of professional guiding. I asked how long did he have?

The stark reality is technology has changed the way we behave and, with that, comes consequences. I often hear folks complain about how the internet has spoiled “secret” holes one used to fish, or wrecked hidden fisheries that once were sparsely paid attention to. While that can certainly be the case, it’s also contributed to the happy success of anglers that historically weren’t so successful, and who doesn’t want to see another good person be successful?

Oh yeah, about those consequences… I’m not liking that Sunday/Monday fin-clipped only rule, but we’ll adapt and likely find a way to circumvent the nuisance, like maybe fish the ocean, where the departments just upped the Chinook limit from one to two adults per day, and it doesn’t matter whether your ocean-caught Chinook is fin-clipped or not, ANY DAY OF THE WEEK. Did I just see you roll your eyes?

As frustrating as it can be, these natural resource agencies do their best to provide as much opportunity to the sport and commercial fisherman as they can, without compromising the guidelines set forth to ensure proper escapement. It’s quite a science, and a necessary one at that. These managers should be applauded for their efforts and appreciated for what they have to put up with to bring us these opportunities.

With technology comes success, and with success comes regulation. It almost fits into that death-and-taxes statement that are the only truisms in life. Before the Magnuson-Stevens Act, it was a lawless ocean. We didn’t have to worry that our archaic methods of fishing pillaged the ocean, but now, things are different. We have the technology to clean-sweep the oceans and keep ourselves in check, but with sound regulations and sensible fishermen, we can have this incredible resource for generations to come. We know what we’re capable of; we’re living with those consequences now and we have no excuse to better manage these sensitive resources better than our predecessors have, knowing what we know.