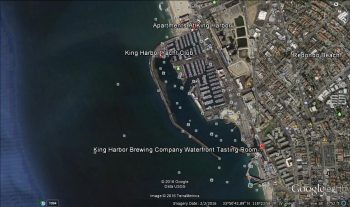 Fish kills all over the country are making headlines over social media and on nightly news. Usually the fish most affected are the smaller species of fish that school up by the bazillion. These fall into a category that has also been in the news a lot lately called forage fish, like Atlantic menhaden (bunker, pogy) and anchovy (sardine) and other very important members of the bottom of the food chain.

For those of you who aren’t familiar with my work, I lead an organization composed of fishermen and conservationists called Menhaden Defenders (www.menhadendefenders.org), and we engage in efforts to restore populations of Atlantic menhaden to historic levels from Maine to Florida. If we are successful in our fight, the marine environment, and both recreational and commercial fisherman, will benefit in a major way. Simply put, the more bunker in the water, the stronger and healthier the ecosystem becomes.

The fish kill issue strikes us deeply because it kills off the young of year as well as the older fish that we rely upon to procreate and continue to expand the biomass. The most recent fish kill of over a million juvenile Atlantic menhaden (called peanut bunkers here locally) in Keansburg, New Jersey is an example of what happens when a million baitfish move into an enclosed area (sometimes man-made). 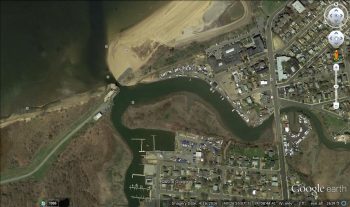 Satellite shot of marina in Keansburg, NJ (note the flood gate at the opening to the bay)

This specific area happened to be a marina, which had very poor tidal exchange in addition to high summer water temps, which further reduced dissolved oxygen levels. In a healthy marine environment during daily tidal changes, the water would flow in and out, flushing out nastiness and bringing in newly oxygenated water. In an enclosed creek and marine area, the fish didn’t have a chance.

Several of the recent fish kills have been caused by large predator fish, like striped bass, bluefish, sharks and rays. The predators push the schools of baitfish into an area and then guard gate. The tide then drops the water levels but the amount of fish stays the same. They breathe until they deplete the oxygen and perish. The fish have simply overloaded the confined areas. At times the same thing happens with sustained winds over a period of time.

Whether the cause of the forage fish balling up and seeking refuge inside the marina waters was due to predators or they just happened to be feeding in there is not important. The bottom line is that they simply used up the oxygen in the water and then died from what is called “aquatic hypoxia.”

During the day, algae add oxygen to the water, but at night algae produce carbon dioxide that uses up all the oxygen. The underlying water condition is called “anoxia.” Anoxic water conditions smell like rotten egg because of the release of hydrogen sulfide gas when the oxygen levels crash. Naturally occurring sulfates in the water turn into sulfide and then the water goes septic. And underwater, this condition suffocates all the fish that don’t make it out in time. Anoxia is especially prevalent during summer heat waves. 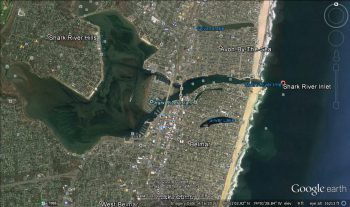 Satellite view of Shark River Inlet, NJ. 10-15 pound bluefish chased a school of bunker into the inlet at high tide. When the tide dropped, they all died because the bluefish stayed at the mouth and wouldn’t let them out.

If you have been paying attention you may have noticed that we also have fish kills in the springtime, but these are usually quite different by nature. In the spring, the cause is usually excessive nutrient overloads or too much fresh water at one time. Storm water runoff is ever increasing, and unfortunately the water is loaded with nutrients from lawn fertilizers and fecal runoff from antiquated sewer systems and animal waste, both wild and domestic all over town.

There are thousands of families, even directly along the waterfront, that continue to inappropriately fertilize at the wrong times. The thought that you can have a greener lawn without consequence is a perception that needs to change. As our society grows, storm water runoff has increased due to overbuilding and paving. Removing trees and vegetation has a direct link to runoff. “They paved paradise and put up a parking lot” has never been more of a true statement. Gotta really think about the creatures that live downstream, such as in the Long Island Peconic River in New York. In fact, the Peconic fish kill in 2015 was so devastating that the towns implemented emergency harvest measures just to prevent another fish kill this year in addition to seeking federal funds to attack the issue of nitrogen pollution from septic systems and fertilizer.

Another important factor in many fish kills is the presence of a virus or other micro-organism that attacks or affects fish that school up in massive groups. In the past two springs, a virus struck NJ’s Raritan River, and menhaden populations died off Connecticut’s shoreline on Long Island Sound, with thousands of them spotted spinning around in circles on the surface and then dying.

Fish kills occur in fresh waters as well, and as we speak, there is a major fish kill going on in Montana’s Yellowstone River caused by a rare invasive relative of the jellyfish. Right now the fish that are dying are only white fish, but unless a solution is found, the odd micro parasites could potentially attack the river’s beloved cutthroat trout and other game fish, putting the fragile river system in peril.

Our nation’s marine fisheries and ocean environment are governed by something called the Magnuson-Stevens Fishery Conservation and Management Act, or MSA as we call it. It’s important that the MSA remains intact and strong because there are provisions in place currently to provide and safeguard essential fish habitat (EFH). Habitat restoration is critical to maintaining healthy oxygen levels in our waters at all times of the year. Restoration of the grasses in the marine environment helps to minimize the impacts of anoxia and increase oxygen levels at times when the fish need it most.

Many of the areas that have experienced fish kills have depleted wetlands and aquatic grass beds in the surrounding areas. If the same wetland were to be restored this would help to oxygenate the nearby waters and help to prevent the fish kills from occurring.

Yes, fish kills have been happening since the early Dutch settlers reported them. Yes, fish kills are increasing but they don’t have to if precautions are taken to improve human infrastructure and natural habitats. Put simply, we need to increase marine oxygenation by preventing careless over-development, restoring vital grass-beds and fixing crumbling infrastructure, such as outdated septic systems. A stronger MSA would insure that funded programs were set in place for wetlands restoration and correct stewardship of our nation’s marine waters. Our marine ecosystems, and both commercial and recreational fisheries, would benefit greatly from making sure that the backbones of the system, our forage species, are kept healthy.

No Bunker = No Bass!