The world famous Buoy 10 fishery is about to explode and anglers are ready for it after what’s been a less-than-impressive summer salmon season. You’ve heard me say it before, we’ve seen some of the best fishing of our lives in the last few years, we’re in for a population correction, and it’s not just sea lions anymore.

Ocean salmon anglers have been going home empty handed for much of the season, tallying what may be one of the lowest harvests on record. It’s estimated that less than 6% of the ocean coho quota was taken with the Oregon Department of Fish and Wildlife (OD&FW) taking retraction measures to ensure enough wild coho escape to the spawning grounds this fall.

Are coho the canary in the coal mine?

It wasn’t that long ago when the state fish and wildlife agency, along with other industry groups, were calling for the delisting of coho from the endangered species list. Mother Nature must have overheard it as last year’s and this year’s adult returns are dismally low. Talk of delisting has gone away.

Coho and, commonly, steelhead will often give a pretty good indication as to how the freshwater and saltwater environments are performing. Coho and steelhead share very similar freshwater life histories in the fact that both often spend about a year and a half in freshwater before migrating to the great salt-chuck. Both species have evolved to take advantage of different hydrological features in the freshwater ecosystems. Coho seek out deep-water pools with woody debris in them, while steelhead spend a good part of their freshwater lifecycle in the shallow headwater riffles of most streams. Maybe not so ironic, that is often where you will find them holding as returning adults in our rivers as well.

After entering the ocean, both species often encounter high mortality rates in the first 30 days of their ocean cycle. Steelhead often migrate to the north, hugging the shoreline like their coho cousins. After only a few weeks, steelhead then migrate west, to the high seas where they will forage for 2 to 3 years before returning as adults. Coho will remain relatively close to shore but often experience the same ocean conditions as high seas steelhead.

The poor ocean conditions from two years ago are starting to rear their head in this year’s return of adult coho and steelhead. Restrictive measures for both species have recently been put in place and predicted numbers have been over shot last year and this year. Now, last year’s ocean conditions were even worse than the previous year, not to mention some record, lethal summer water temperatures, indicating to me, the worst is yet to come.

I’m not really spewing all this information to sound like doom and gloom. I got a bit of a lecture from a fellow fishing guide the other week that I shouldn’t sound so negative in my recent blog posts. It’s really not my nature to be so negative, but as I notch another year of experience in paying attention to fish behavior, it will once again become evident that we, as a human race, have a lot more to do in order to save these iconic Northwest fish we all love.

Maybe even more importantly, we have to realize just how far we have slipped from pre-European settlement. Here is a graph that indicates just how far we’ve plummeted: 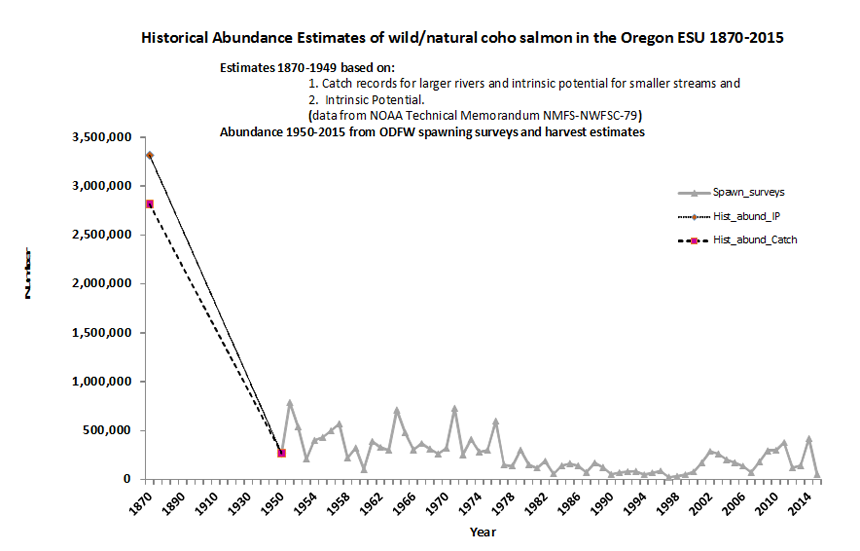 It doesn’t take a rocket scientist to see how we’ve dramatically impacted these runs of fish. In a recent presentation by a south coast fish biologist, Oregon was one of the better western states with close to 6% of our historical runs of wild salmon. Maybe something not to be so proud of.

We still have much to look forward to, however. The Chinook run is about to break loose on the lower Columbia, to the tune of over 900,000 returning adults. Anyone hedging bets? It wasn’t that long ago however, that we were pretty excited about getting half that number back. It should be a good season although Nehalem Bay summer Chinook seem to be a bit lagging to date, hopefully not an indication of how productive our fall is going to be.

I guess my point is, we have examples on both sides, where fishery managers have over-protected the fish and certainly many examples of where they’ve under-protected the run as well. Even with sound laws like the Magnuson-Stevens Act, we still don’t quite get it. Sardines were fished down quite heavily in the most recent Oregon and Washington directed fisheries, and seiners are now sitting on the sidelines when they should be making their winter paychecks.

We’re certainly beholden to natural conditions and fluctuations but what we rob now from the resource, we’ll pay for later. I’d just like to see a few more wins for the fish so that we can all benefit from a properly managed resource and not have to be playing “catch-up” for the rest of the decade.

Oh, and did you hear about the 2-rod endorsement extension that OD&FW has expanded into our fall fisheries? Now they’re just teasing me….