I know it’s a bit clichéd… actually, it’s really clichéd, but of course that’s what we’re supposed to write about during this season of thankfulness.

It can’t all be all bad news all the time, right? Only after reading about the decay of pteropods in the Pacific and the mass strandings of whales off of Patagonia do we get an idea that we may have just seen the best the Pacific can offer off the coast of Oregon. Sometimes, it can be hard to focus on the good, especially with news media largely only reporting the bad. 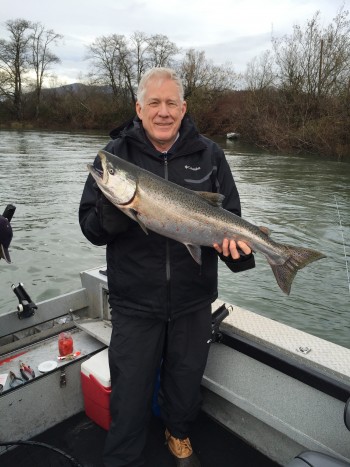 But we can look at what happened here in the Pacific Northwest this fall, with record runs of Chinook to the Columbia River and the continued excellent catches of Chinook in our coastal streams. It has clearly been the year of the king, as in salmon.

But let’s take a deeper look into why (speculative or not, on my part) we may have good Chinook returns and maybe not so good coho and steelhead returns. After all, December is a big month for us; the 2016 spring chinook prediction is due out at mid-month. These spring Chinook drive people insane. We’ll even start to see boats in pursuit of the season’s first spring Chinook as early as January, four full months away from peak season! Call us fanatic, I know.

Chinook are known northward migrants. Smolting Chinook, yet to over-summer in the watershed, migrate out into the ocean after a summer of foraging in the estuaries of the Oregon Coast. It’s one thing that they escape the lethal summer water temperatures that we witnessed this year in most of the lower Pacific states, but to enter the ocean with little other competition, during the fall months when not nearly as many predators are in the nearshore, can be nothing short of advantageous.

Birds have an inconsistent source of available forage because the bulk of the forage species have headed for deeper water, and they’ve now migrated south in hopes of more favorable foraging options, leaving juvenile Chinook salmon with much to be thankful for. The final ecosystem advantage is the systemic elimination of their competition due to the changes humans have caused in freshwater ecosystems. The Chinook life-history lends itself to success because juveniles are not as dependent on freshwater ecosystems, while wild coho, steelhead, cutthroat trout and adult spring Chinook must over summer in the watersheds to meet their biological needs. That scheme didn’t work so well for those species this year.

It’s also clear with the sea-lion pup abandonment last winter, the lack of sport and commercial fishing success off the southern Oregon Coast and the gross over-prediction of coho this year that forage off of northern California and Southern Oregon was pretty grim. Did I mention the collapse of the sardine population and dramatic downturn of the central subpopulation of northern anchovies? Let’s not forget about the massive shellfish closure for clams and crabs along the Oregon Coast just recently. Yeah, maybe it’s time to pay attention.

But this is the holiday season, right? It’s not all that much fun to write about the deep concerns those that pay attention to ecosystem function have in this day and age. After all, aren’t we just coming off a record return of Chinook salmon to the Columbia River? We do have much to be thankful for. Just for fun, let’s go over a few of the good points going on within our community:

Thank YOU for reading this blog and contributing to the conversation. Thank YOU for being a part of the solution, instead of the problem. Have a great holiday season!

1 comment on “A Time of Thanks: Happy Salmon Season to All”