Twenty-plus years ago, while guiding on Florida Bay in Everglades National Park, I volunteered to take water samples for The Nature Conservancy. Guides like me were desperate to help any way we could. The Bay was in the midst of a fish-killing algae bloom that was fueled by a massive seagrass die-off. The grass died because of a lack of clean fresh water and extreme heat. The damage was so extensive and the public outcry so enormous that despite the tragedy I witnessed on my home waters, I took heart that our elected officials and government agencies would indeed restore the “River of Grass.” 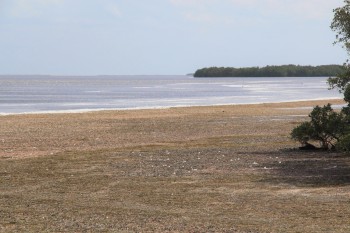 Indeed, within a few years, in 2000 to be exact, Congress authorized the Comprehensive Everglades Restoration Plan (CERP). The plan was supposed to take 30 years to implement. To be fair, we have made progress. The Kissimmee River restoration is one of the largest and most successful of such projects in human history. But here we are, on CERP’s 15th anniversary—halftime along the 30-year timeline of project implementation—behind schedule and watching helplessly as our most iconic estuary follows others in the Everglades ecosystem toward oblivion.

Panic sets in when hearing that Florida Bay, a body of water I’ve treasured since my childhood and have guided on since the late 1980s, is again on the verge of collapse.

Collapse. I’m not being overly dramatic. That’s the word being used by eminent coastal scientists. So why aren’t the U.S. Congress, the Army Corps of Engineers, Florida Legislature, state water managers, and for that matter, all stakeholders coming to the rescue of this economic engine and world-class fishery? After all, much of the Bay is within Everglades National Park, one of America’s most iconic national parks. A World Heritage Site to boot, and one that the World Heritage Committee inscribed to the List of World Heritage in Danger, due to serious and continuing degradation of its ecosystem.

There are canaries in the coal mine aplenty: Salinity readings double that of the open ocean in this estuary. Miles of dead and dying seagrasses float to the surface. Fish kills of all kinds reported. Hydrogen sulfide gas bubbling up from once healthy and life-supporting mud flats. A drastic falloff in spotted seatrout numbers, the most popular sportfish in the entire state.

Conditions today are an eerie reminder of the late 1980s when a similar combination of super-salty water and late-summer heat touched off what became a massive grass die-off and resultant chronic algal bloom that decimated hundreds of square miles of Florida Bay’s grassy meadows and its inhabitants over a roughly 10-year period. The sportfishing economy took a major hit, and commercial fishing for both crabs and finfish collapsed. The ecological toll was staggering. Truth be known, many veteran anglers and guides will tell you that the fishing and the habitat has not been the same since.

Though we lack a solid quantification of the Bay’s economic impact, Florida Bay-dependent sport fisheries, which include inshore and offshore fisheries that drive so much tourism in the Florida Keys and Miami, surely must generate billions of dollars. In the face of this ecological-economic crisis, it is frustrating and unacceptable that some state and federal level officeholders and agency bureaucrats are reduced to praying for rain and other weather conditions that might help the situation in the short term.

“The Bay needs a wet winter and things should improve,” a water manager told me flatly.

“The geologic makeup of the hardest-hit part of the Bay makes it prone to grass die-offs. Too little water circulation,” another marine scientist said. 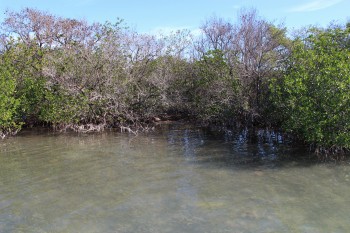 “This has happened in the past in Florida Bay during dry times, and is mainly weather-related,” I was recently told by Everglades National Park Superintendent Pedro Ramos, who, to my relief, also cited the need for increased water deliveries to the park through CERP. He added that we must also better prepare for climate change, and the likelihood of more severe droughts and higher temperatures.

The fact remains that Florida Bay is at the mercy of rainfall and climate change because we cut off its headwaters.

“The Bay is always on a kind of knife’s edge,” says Dr. Thomas van Lent, Director of Science and Policy for the Everglades Foundation. “The single biggest input in the late dry season was this flow from Everglades and it’s gone.”

Gone, because man has done such a great job of siphoning it off, way north of the Park, to keep once-wet lands dry for development and agriculture.

Also on the knife’s edge is the Bay’s productivity—the fishing to be exact. You can’t lose vast swaths of habitat, sea grasses in this case, and not expect a cascade of ill effects. The recent fish kills (mainly toadfish, ladyfish, mangrove snapper, and jack crevalle) in the immediate vicinity of the seagrass die-off can be attributed to low dissolved oxygen where the dead vegetation rots.

However, well prior to the first indications of hyper-saline water conditions this past spring, anglers were reporting an alarming shortage of spotted seatrout—the most popular recreational fishery in Everglades National Park, if not all of Florida. The trout were particularly scarce just south of Flamingo and in many once-grassy basins to the east of Flamingo—right where the worst seagrass die-off has occurred. It doesn’t take a marine biology degree to understand that loss of habitat leads to loss of forage, and ultimately the loss or displacement of predators. A lack of healthy habitat disrupts the food chain and diminishes the carrying capacity of a body of water.

If there ever was a “poster fish” for ecosystem-based management, I’d say the trout is it. Guides from the Florida Keys who routinely run to Flamingo with customers say trout fishing is the worst in memory, and Everglades National Park’s creel surveys support that. 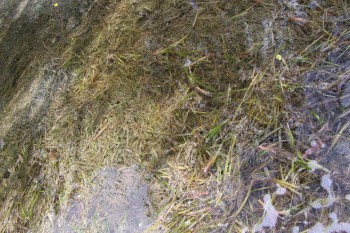 Capt. Matt Bellinger, of Bamboo Charters, reports that his bread-and-butter “family fishery” is no longer in the general vicinity of Flamingo.

“The bottom of some of the lushest seagrass basins in the Bay are left barren, so the trout have vanished,” said Bellinger. “I mainly run bay boats for 3 to 4 anglers, rather than strictly poling skiffs for shallow sight fishing. Mostly families and fun fishing for their kids, and where I used to easily catch and release 50 to 100 trout in a day’s charter, I’m lucky to catch 6 to 10. It takes me three months to log 100 trout now, and this falloff started a couple of years ago.”

Over a decade ago, the Department of Interior (DOI) along with the National Park Service have been taking the lead on the push for large-scale water projects to deliver water to the Bay, most notably the Modified Water Deliveries project, the raising and bridging of what will eventually be over 6.5 miles of U.S. 41 (a.k.a. the Tamiami Trail) to convey more Everglades water to Florida Bay. A one-mile section is finished and the DOI has begun the process to approve an additional 5.5 miles of bridging. That’s an encouraging start, but more needs to be done to make sure there’s water to send under those bridges.

We can’t just sit back and blame a year or two of drought conditions and hotter-than-normal summers for the Bay’s demise.

Let’s address the fact that the very fresh water needed in the Park and Florida Bay is wasted year after year, shunted from Lake Okeechobee to the coasts. Forever citing self-imposed constraints, the Army Corps of Engineers and South Florida Water Management District routinely dumps to sea hundreds of billions of gallons of fresh water into other vital estuaries, specifically the estuaries fed by the St. Lucie River in Stuart, and the Caloosahatchee River, which pours out into Pine Island Sound. The water Florida Bay needs is available. Lots of it. I watch it gush into the St. Lucie River, destroying the hometown estuary, as others do living near the Caloosahatchee River watershed. This wasteful practice will likely be the death knell for three world-class fisheries and the economies they support.

It’s time to start demanding that Everglades restoration be accelerated to increase water to Florida Bay and protect the northern estuaries. Full funding of projects underway and completion of the Modified Water Deliveries project, authorization of the Central Everglades Planning Project (that will store, clean, and convey water south) and solving the water storage problem are key priorities to directly benefit the Bay.

Many of us in the sportfishing community who experienced the massive algal blooms of the early 1990s are greatly concerned that Florida Bay may lack the resiliency to bounce back from an algal bloom of that proportion. Could Florida Bay become Florida’s own Dead Sea? It’s not out of the realm of possibility, and to the science community’s own admission, there is nothing that can be done short term. Restoration of historic freshwater flows that once recharged both the Everglades and Florida Bay is the key, the one solution, to reversing the damage and keeping this from happening again.

Capt. Mike Conner is a licensed Florida fishing guide who has served as editor and TV host for three major fishing magazines. He has also written numerous conservation columns over the years.
View all posts by Mike Conner →