In sophomore chemistry class (one of my least favorite classes, but one of my favorite teachers), I got to witness the ping pong ball sprung from the mouse trap trick that really demonstrated the effects of a nuclear explosion. It was a pretty profound experiment, clearly demonstrating the true effect of a chain reaction. I might have liked it for more than one reason, I’ve learned to love the sound of a snapping mouse or rat trap, the sweet sound of success, but I digress. 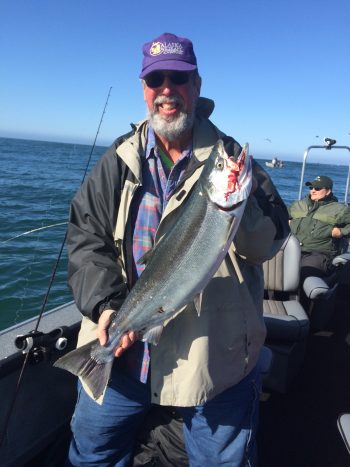 Rich Slusher of Marin County, California with a Tillamook Bay wild coho from September of this year. Coho fisheries no longer exist in most years along the California coastline.

So speaking of chain reactions, you’ve likely read some of my blog posts on ocean acidification or boom and bust fisheries. The science is becoming even more clear that humans are having an impact on our aquatic ecosystems, most concerning, our vast ocean resources. And if there is one place where a chain reaction can be witnessed in its entirety, it’s in the Pacific Ocean, one of the richest oceans in the world.

So when NOAA comes out with new findings stating that “more than 50 percent of pteropod (microscopic snails) shells collected in shallower waters were severely dissolved,” it’s real cause for concern. Top that with the expansive recreational crabbing closure along most of the Oregon Coast and the recent announcement that the commercial season will be delayed, and you get a real sense for the economic cost a changing ocean will cost these coastal communities. Oh yea, let’s not forget the razor clam and mussel closure that happened last September. Maybe it won’t be a shellfishy holiday season afterall.

On a more fun note, how about that seal-eating shark on the lower Columbia River that the crabber filmed the other week? Finally, some good news about climate change!

We can’t ignore the facts, however, that our daily activities are having a profound impact on our ecosystems. So, let’s look at some anomolies in this year’s fisheries. Since these are anecdotal theories (that’s really the best we fishermen can do), take them for what they are. But how about that ocean coho fishery this summer, or lack thereof? Only 6% of the ocean coho quota was harvested this year. Now, not many of us had high hopes of a smack-down-drag-out fishery this year, but 6%? That’s likely a record low harvest. Where did they go? Where were they feeding? The coho did show up when it was time to come home to spawn. Wild and hatchery coho saved my September fishery since the Chinook weren’t so prevolent this season.

Do you remember hearing the mumblings of the innovative anglers that dropped their baits down to the bottom of the ocean out of the mouth of the Columbia last July, and pounded out a limit of coho in no time flat? When is the last time you expected to catch coho on the bottom of the ocean, especially in 120 feet of water? I just got done fishing the lower Wilson on November 22nd, to no avail for Chinook, in what was ideal river conditions. It’s been a dismal October and November season compared to seasons past, but I confirmed with a commercial troller the other day that the fleet had one of the worst seasons on record for their ocean troll fishery. Most of the fish caught off of the Oregon Coast by the troll fleet are California Chinook.

So, let’s formulate some theories and run some heady models for what the future holds, think “chain reaction:”

Have you ever heard me say, “We don’t even know what we don’t know yet”? That may be the scariest scenario of all. I’ve also heard plenty of skeptics say how resilient salmon species are; they will adapt, they will survive. I think most of us know how short the amount of time it took to put our Pacific salmon in peril. We have our share of listed species. But don’t even use the West Coast as an example, look east, where humans have spent just a tad more time compromising watersheds and developing industry. How are those Atlantic salmon species doing after all?

If you want a real look at what the future holds for species that we care the most about, you look at the populations at the fringe ranges of where the species have historically existed. For the West Coast, that would be California, where my dear friend from Marin County (Bay area) is an active member of the Friends of Corte Madera Creek that flows right behind his apartment building. They no longer count the number of wild coho, they name them individually. Here’s to the future…

2 comments on “Chain Reaction: How Far Will Our Fisheries Fall?”