My parents passed on so many priceless outdoor skills and nuggets of wisdom about the woods and waters. Now that I’m an expecting father for the first time, I find myself thinking a lot about what I want to instill in our son. I hope we continue the family appreciation of fast rods, well-designed boats, and fine bird dogs. But we are going to do at least one thing differently. We want to instill a stronger appreciation of science and its role in wildlife management.

Growing up, “cracker wisdom” often trumped science and science-based management. My influences were some of the best fishermen and hunters on earth. Law-abiding they were, sometimes. Biologists they were not, though it is a shame that these folks never got the chance to show researchers their perceptions of the woods and waters they knew so intimately. I idolized those men, and unconsciously grew up respecting their opinions more than science-based facts, not realizing that my future as a sportsman depended so heavily on science-based management.

Over the weekend, I got to thinking about how lucky this kid will be if the family passion for the outdoors is in him. He will get to learn skills from some of the best fishermen, hunters, divers, and surfers. He will also get to interact with some of the leading experts in the realms of ecology and wildlife management. I hope he is full of appreciation and affection, and knows enough to avoid stories like this one.

When I was a kid, my buddy CJ and I frequented a large neighborhood pond that was full of small bluegill bream and some really smart largemouth bass. It seemed like you couldn’t get bait or a lure past bluegills, which alas, were rarely big enough to warrant filleting. Our dads — a lawyer and a banker by trades — told us that the bluegills were overpopulated and stunted. There just isn’t enough food in that pond for so many fish to get bigger, they said. 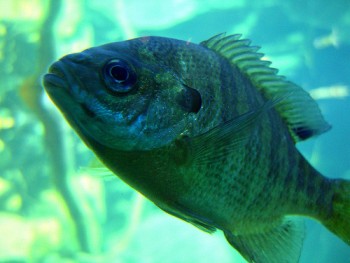 That summer CJ and I started culling the bluegill population, operating under the “logic” that if we killed the bigger bluegills then the smaller ones would get the chance to grow up big. We also theorized that since the bass primarily fed on the bluegills — a theory based on two instances where we caught bass in the pond freelining live bluegills — we should really fish them down so the bass would be hungrier and eat our lures. Suffice to say that the herons, owls, and ospreys got a lot of free meals that summer in the early 1980s.

It never crossed our minds that we were actually compounding harm to that freshwater ecosystem and its fishery. We never considered that we weren’t the only anglers fishing in that pond, that poor folks fished there for sustenance. In “culling” those larger bluegills, we only succeeded in exacerbating the profoundly consequential problem of “growth overfishing,” where fishermen selectively remove the largest breeding fish from a population.

The consequences of growth overfishing vary, depending upon species. In the case of the humble bluegill, we were removing some of the fish with the best genes for survival and growth. We also removed some of the fish best able to sweep and defend bluegill nests come springtime spawning season. As Matt Miller put it in The Nature Conservancy’s Cool Green Science blog:

“The bigger and badder the male, the better the location of the spawning bed. At the center of the colony, in the best position to fend off predators and other males, is the biggest and baddest bluegill of all.”

Having smaller wimpier males guarding the nests makes the eggs more vulnerable to salamanders and other predators. If we did put a dent in the population, then we also damaged the forage base that larger predators such as the coveted bass, as well as diving and wading birds depend on.

It turns out that what that bluegill population in that pond probably needed was just a small reduction in fishing pressure. Studies have shown that modest reductions in bag limits allow ponds and lakes to produce larger bluegills, resulting in fewer fish but larger filets and a healthier ecosystem. Here’s another great blog post by Matt Miller about these studies.

That story makes me appreciate the sheer scale of the challenges of marine research and community outreach. Of course, in many ways studying and managing marine species is much more difficult than maintaining bluegill populations. Many of the species we target in the waters surrounding Florida are:

Let’s think for a moment about the last characteristic in the context of contemporary marine fisheries management. Most individuals live to near maximum life.

Before fishermen entered the picture, these fish species were very successful despite, in most cases, being slow to mature and generating relatively few offspring. Now, we manage the population based on a “spawning potential ratio,” or SPR. The target SPR for gag grouper in the Gulf of Mexico is 40 percent of what scientists estimate the unfished or “virgin” biomass to have been. Then consider that the species is especially vulnerable to overfishing, since once certain individuals reach full maturity a small percentage of the population changes sex from female to male. The males are the largest specimens, so the most sought after, even though leaving them in the water to reproduce would result in a much more abundant fishery.

Growth overfishing of gag grouper was one of the main reasons why the species found itself on the overfished list and in really deep trouble. Thanks to protecting some of the spawning grounds, and federal laws that required the Gulf of Mexico Fishery Management Council to rebuild the population, the species is considered rebuilt. But that rebuilding process was painful and contentious.

Some fishermen made it harder on the rest of us than it needed to be. Due to their short-term economic interests, they presented specious evidence and testimony contradicting the scientists about the places and the times that the groupers spawn. Others though, were completely sincere in recounting their observations of egg-carrying females outside the spawning season. They simply believed their own eyes.  They just didn’t have a strong enough understanding of the gag grouper’s reproductive biology to realize that lots of ripe females doesn’t solve the problem of too few males, or that sometimes fish generate eggs then reabsorb them once their bodies realize that it’s not the right time to spawn.

From “stunted” bluegills to gag groupers with eggs in them outside the spawning season, there are thousands of examples of well-intentioned fishermen believing our own eyes and each other, but not having the scientific knowledge to interpret what we see accurately.

Thankfully, the United States’ fisheries management juggernaut is moving toward ecosystem-based fisheries management. The upcoming reauthorization of the Magnuson-Stevens Act will provide an opportunity to implement this approach across all U.S. fisheries. As we do, it is as incumbent on scientists and fishermen to work together in cooperative research efforts, as it is for scientists and communicators in fishing communities to work together to help stakeholders develop a stronger appreciation of the species we target and the ecosystems they inhabit. Community-wide appreciation will help reduce misinformation and controversy, while engendering healthier resources and better fishing.

Terry Gibson is an outdoor writer and consultant based in Jensen Beach, Fl. Over a 20-year career, Terry has served in several high-level editorial positions at major fishing publications, managed a charter service, and served in various appointments to advisory panels to the South Atlantic Fishery Management Council and South Florida Water Management District.
View all posts by Terry Gibson →