A short while back, I had occasion to join my friend Pietro Parravano on a mission to have his lifeboat repacked. Pietro is a commercial salmon troller out of Half Moon Bay, California, with over thirty years’ experience on the water. He picked me up in his dented, cobwebbed pickup truck from my office in San Francisco, and we drove to the only place within forty miles of Pietro’s home and port where he could hire someone to certify that his safety gear was in working order.

That place happened to be San Francisco’s world-famous Fishermen’s Wharf — or so we thought. 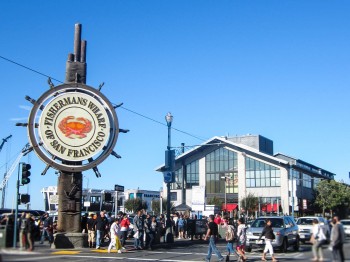 For those who don’t know it, Fishermen’s Wharf has morphed into some gonzo hybrid of a carnival and a shopping mall. It entices tourists with a veneer of nostalgia — the San Francisco of yore embodied in the Monterey fishing boats moored along the main promenade, and the Buena Vista Café serves S.F.’s iconic Irish coffee just a few blocks away — but the Wharf quickly gobbles up attention spans with Crazy Shirts, wax museums, and the city’s only In’n’Out Burger (a California staple, to be sure, but perhaps not a Fishermen’s Wharf must-see).

Sure, you can get a bowl of cioppino at Cioppino’s Restaurant, or a crab Louis at the recently remodeled Lou’s. But Fishermen’s Wharf today is more about co-opting the nostalgia of fishing as a vehicle to peddle “suns out guns out” tank tops to tourists than it is about fishing itself.

Nowhere is this more apparent than at Coast Marine, the commercial fishing supply store where we expected to drop off the lifeboat. Coast Marine has always been a smorgasbord of gear — cleats, blocks, boots and hose fittings might all be within an arms reach of each other.

Pietro explained on the drive over that Coast Marine had had a storefront in the Fishermen’s Wharf neighborhood. In the recent past, however, it had split its square-footage into equal parts fishing supplies and high-end outdoors clothing — the type that might be useful to a fisherman who could afford it, but might also appeal to well-heeled tourists unprepared for San Francisco’s summer fog and wind.

When we arrived, we couldn’t find Coast Marine. Where it had stood, we found the Wharf Store, purveyor of trinkets, t-shirts, gags, Helly Hansen parkas, cartoon maps and Go Pro video cameras. We parked around back of the Wharf Store where we found the “Marine Division,” a dingy warehouse that contains all that’s left of Coast Marine, including the original proprietor George, presiding over most all of the gear that must have been in the former, larger space.

George apologized that the lifeboat repacking service was no longer an option at his location, but his staff was quick to bring a dolly to our truck, and we offloaded the thing so that the repacker, who now operates in an industrial district a few miles from Fishermen’s Wharf, could pick it up himself. Pietro would be able to retrieve the certified boat from that new location.

My first impression of this whole scene was that it was shameful to relegate such an important, iconic industry to a back alley of its historic home. And then perhaps a more generalized shame: that Americans would rather buy farmed, imported, low quality seafood and have enough left over to get a cheap novelty t-shirt than spend their money on superior products harvested locally and sustainably by the men and women of our nation’s commercial fleet. 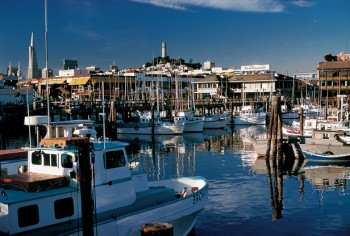 But Fishermen’s Wharf is actually exactly what its name suggests: a bustling, working waterfront where the fish business is carried out. A recent article in the San Francisco Chronicle highlighted the fact that Fishermen’s Wharf belongs to the fishermen between the hours of 3:00 A.M. and 9:00 A.M., by which time the tourists have retreated to the drinking districts and the wax museum is shuttered. And Pier 45, extending directly out from the core of Fishermen’s Wharf, with its hoists, squid smells, dead seagulls and utter lack of tourists, remains the nerve center of San Francisco’s fishing industry. It’s just that the fishing is hidden behind a veneer of tourist traps.

San Francisco is a unique place — it’s an epicenter of both tourism and commerce, and for that it seems like real fishing simply has to find a way to coexist with the co-opters and the t-shirt hawkers. But I fear that, as with Coast Marine, the general trend is that the “working” portions of America’s working waterfronts is to shrink and to be relegated to the back corners of harbors, their historic effort having been replaced with imports.

We need to preserve our nation’s local fishing communities, and especially the working waterfronts that are the focal point of those communities. The American fishing industry worth about $141 billion annually, which would be a terrible thing to lose. But even worse would be the loss of an inimitable part of American history and culture. And if we lose that, we can’t simply replace it with a wax museum and a restaurant.

It’s late October, and after we finished at the shop and said goodbye to George, Pietro and I walked down Pier 45 to admire the crab pots, stacked along the pier with fresh wraps and new buoys, ready for crab season to begin. It’s an exciting time to be a fisherman in San Francisco, but a tourist might never know.