Fall brings to mind one thing for the NW sportsman or -woman, and that is harvest time. Whether you’re deer hunting or pursuing the largest salmon that return to Oregon’s waters, you reap the benefits of some of the finest weather and most-productive period of gathering that Pacific Northwesterners get to witness. There must be an ecological reason for such a bounty; in other words, lean times lie ahead.

Regional anglers know to head to the coast for the fine returns of fall Chinook that grace our watersheds. These behemoths return to nearly every stream and river system that flows from the coast range, from the Necanicum River to the north, to the Rogue on the south coast. As the last remaining healthy run of wild salmon in Oregon, it’s an unparalleled opportunity. I wish man could take credit for it. 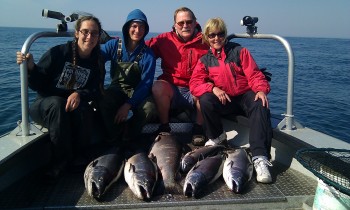 Oregon families know the value of sportfishing together. This family traveled from around the country to fish in Tillamook Bay during the peak of the fall chinook run. Together, they harvested this bounty of wild salmon just outside the entrance to the bay, in the Pacific Ocean.

The fact is, we’re actually to blame for this bounty. With all the drastic changes we’ve made to our beloved lands and waters, we’ve all but eliminated the competition for fall Chinook. They are the perfect species to evolve into a thriving population for two reasons: they are mainstem spawners and they don’t have to over-summer in our lethally warm coastal watersheds. As adults, they return in the cool waters of the fall, emerge in late winter (especially numerous in low water winters) and migrate into the estuary, where they enjoy a bounty of plankton and cool ocean water temperatures before migrating out into the ocean with the first fall rains. I won’t launch into our sins against these magnificent creatures; you’ve heard that a hundred times already. This article is supposed to be about celebration!

What a year we’ve had — an awesome ocean salmon season, record-breaking Columbia River Chinook returns and now, onto the brutes of fall. Last year’s fall Chinook returns were impressive at least for small fish. This year, we’re going to have a great return, and many of the returning adults will be the larger 5-year-old adults, often topping 30 pounds. Of the hundreds of Chinook we took last year, only one made it to the 30-pound mark. This year, it will be different (at least that’s what my enthusiasm is telling me). I wrote earlier about “where are all the Tillamook hogs?” Well, fish of a higher grade have finally shown up, and their numbers remain impressively consistent. What remains to be seen is how long this flush of fish will remain present, as over the last several years, the late component of Tillamook fish have faded by mid-October. It’s a dynamic system here in the Tillamook Basin. With five major river systems, each offering different hydrological features, it’s a crap shoot how each one will produce. So far, we’re off to an exceptional season.

There is no better way to celebrate all that Oregon has to offer than catching a fresh, chrome-bright fall Chinook in one of our coastal systems. However, you’ll need to be armed with the best information and techniques to fool these fish; they’re not notorious for biting. One of the best ways to learn to catch these coastal prizes is learn from those with a history of success. Attend a local chapter meeting of the Association of NW Steelheaders. One thing is for sure, the Steelheaders stick together, and if you’re a member, other members will step up to make sure you remain invested in the success of our sportfisheries. You’ll get tips and tricks from folks that participate in this sport on every weekend and take advantage of those sick days when conditions are perfect.

The Association of NW Steelheaders isn’t just a fun group of folks who go fishing and crabbing with each other. As important as that is for our membership, we’re busy making sure that forest ecosystems remain intact, forage fish aren’t overharvested and school kids watch their cool-water tanks incubate the next generation of protein for us apex predators. It’s an incredible group of volunteers that are passionate about what we do for fun and what we do for future generations of anglers.

In October, the Association will hold its 26th annual SHOT (Salmon Hawg Open Tournament) in hopes of taking prizes for the most inches or biggest sculpin. The winner of the big sculpin award gets to eat that fish in front of a cheering crowd, fresh off the BBQ at least. The tournament is held in Tillamook during one of the most productive time periods of the fall season (October 15-17 this year). Proceeds from the event go to several of the Steelheader’s programs in support of better fishing on the north coast.

With large returns of Chinook and coho destined for most of our coastal systems, this is the year to learn how to do it right and stock the freezer with high quality protein that will feed your family and friends. Take advantage of what your fellow anglers have to say about catching these fish and continue to support those organizations that are making a difference.