If you’re not an angler who fishes the coast somewhere between Virginia and Massachusetts, you may never have heard of a tautog.

Where I live on Long Island, we usually call them “blackfish,” which pretty well describes their appearance, although it doesn’t say anything about their white chin and dirty-white belly, or the thick, sturdy buck teeth that they use to scrape mussels and barnacles off the sides of rocks and the hulls of sunken wrecks. 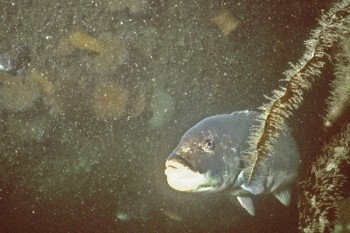 Back in the ‘60s, when I was a boy, we caught plenty of tautog in the rock-studded waters of Long Island Sound. Twenty years later, after I moved to Long Island’s South Shore, rocks were scarce, but I could still take plenty of blackfish, up to 5 pounds or more, by fishing around the pilings of a local bridge.

I can’t do that anymore, as the tautog population has declined sharply in the past thirty years. Part of that decline can be attributed to the insatiable demand for small tautog coming out of the live fish market that thrives in many urban centers along the East Coast, which has given rise to a substantial illegal harvest of undersized fish.

Legal commercial harvest also spiked. Between 1950 and 1974, reported commercial tautog landings averaged well under 200,000 pounds per year. However, beginning in 1975, such landings began ramping up quickly, peaking at 1,157,200 pounds in 1987 and exceeding the million-pound mark in five of the six years between 1987 and 1992.

Recreational landings also increased during the 1980s. However, it is difficult to compare that increase to the increase in commercial landings, as there was no regular estimate of recreational harvest prior to 1981. It is also impossible to say how many fish caught by “recreational” fishermen were illicitly sold; considering some arrests made by conservation officers, that number may be very large.

At any rate, the most recent benchmark stock assessment stated that “harvest levels were unsustainable” during that time, so the tautog’s decline is not surprising.

Managers’ efforts to rebuild the stock, however, have been surprisingly ineffective.

Primary responsibility for managing tautog belongs to the Atlantic States Marine Fisheries Commission (ASMFC), which released its Fishery Management Plan for Tautog in March 1996. With respect to overfishing,

“The plan defines overfishing as a rate of fishing exceeding the natural mortality rate (M=0.15). This overfishing definition is consistent with the slow growth and long lifespan of this species. In addition, this conservative reference point is warranted given the uncertainty in stock structure and in the spawning biomass required to maintain at least average recruitment.”

However, having once defined “overfishing,” ASMFC’s Tautog Management Board did little to end it.

ASMFC is not bound by the National Standards included in the Magnuson-Stevens Fishery Conservation and Management Act (Magnuson-Stevens), which require federal regulators to adopt “Conservation measures [which] shall prevent overfishing…” There is no requirement that ASMFC ever end overfishing at all.

And, in the case of tautog, it didn’t. Instead of requiring the fishing mortality rate to be reduced to 0.15 right away, it decided to let overfishing continue for a couple of years, until it would finally be ended three years later. [NOTE: The fishing mortality rate is a variable used in population models, which does not intuitively correspond to data such as number of fish, percentage of fish harvested, etc. For purposes of this discussion, it is sufficient to know that the higher the mortality rate, the more fish removed from the population.]

As things turned out, it didn’t happen three years later either.

Biologists advising the Management Board analyzed the likely impacts of each of the options, and noted that such analysis showed “the status quo and the F-40 percent SSB underperforming the other options.”

However, many Management Board members were more concerned with short-term economic impacts rather than the long-term health of the stock. The comments of John Connell of New Jersey, although longer than most, were typical.

“To add an additional 63 percent we feel would be untenable…

“There is a great deal of concern about the flawed [recreational landings] data that is going to definitely lead us into a non-directed fishery. If we have to take the reductions, we’ll be lucky if we have a one-fish bag…

“The anecdotal information we have is that [the stock assessment] doesn’t reflect what is going on in the fishery. There’s a lot of fish out there.

“In addition, we have grave concern here in New Jersey that we have already eliminated subsistence fishermen from docks and piers because of our size limits. Now, because of bag limits that are going to be implemented on the water, we’re even going to eliminate them from that fishery.

“People who depend on bringing fish home are certainly not going to pay to go out fishing, whether it’s on their own boat or somebody else’s boat if they can only bring one fish back…

“An additional concern that we now have, when we look at these further reductions, is the socioeconomic issues that will be impacted upon our bait people, our party/charter boat people, because we know darned well…that there’s going to be reductions in the scup fishery which we substituted for the tautog fishery last year…”

The Management Board eventually decided, by a wide margin, to adopt the “underperforming” SSB-based reference point, which would maintain the fishing mortality rate at 0.29 and so perpetuate overfishing.

Predictably, tautog remained scarce. Finally, in the spring of 2011, ASMFC adopted a new Addendum VI to the Tautog Management Plan, which—fully fifteen years later—reiterated the need for the same 0.15 fishing mortality rate that was proposed in the 1996 Fishery Management Plan for Tautog.

Thus, ASMFC’s Public Information Document revealed that at the end of 2013, seventeen years after ASMFC recognized the need to reduce fishing mortality to 0.15, fishing mortality still stood at 0.30, exactly twice the permissible rate.

No catch limits, no accountability, no end to overfishing. Over the years, ASMFC has managed tautog very badly.

The Public Information Document lays it all out, and it seems even worse when you see it on paper.

3 comments on “Tautog Management: It Seems Even Worse When You See It on Paper”