Where are all the Tillamook Hogs?

Home waters, there’s nothing quite like it. I finally got to transition back to Tillamook Bay this week. After what I would term a disastrous September Buoy 10 season due to a lack of hatchery coho, it was a great move.

My favorite month is September on Big Blue, the Big Pond, the salt chuck, call it what you will, because the Pacific Ocean’s bounty seems limitless this time of year. This week was really no different… two days, 17 “chances” and seven chinook, 84 keeper Dungeness crab, and one harbor seal (we didn’t keep the harbor seal). Oddly, not a single fish was over 20 pounds. But all on a fairly calm ocean, ending with a dramatic offshore view of a southern squall that was supposed to shred the waters come Wednesday (9/16). The weather system never happened on Wednesday… weathermen, that is another story. 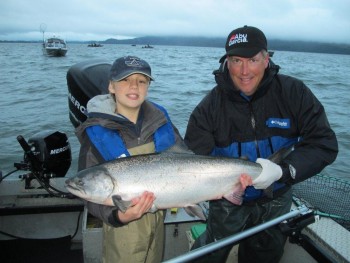 Guido Rahr Jr. releasing a 20+ pound hen on Tillamook Bay, Oregon with guide Bob Rees. Guido wanted to release the fish because the wild hen was laden with eggs for future generations of fishes. Not many 9-year olds, let alone adults, are as willing.

There really is nothing quite like fishing the ocean in September. It’s often the calmest waters of the season. In Tillamook Bay, you get away from the pesky seaweed that fouls your lines and into an environment where fish are occasionally still feeding; we don’t have that pleasure once they enter fresh water.

And did we see a harvest this week. There were boats with three and four guys getting their two chinook limits by 10:30 am on these days. It helps that there weren’t many people fishing. And crabbing? With few other pots out there, the bounty was great, although I’ve seen better. The albacore boats got turned around about five miles out; it seems the weather can be drastically worse five miles out versus inshore.

Bottomfishers were coming back to port with quick limits too; however, fresh sea bass and an occasional lingcod are not bad table fare. Deep reef opens on October 1st, and if the waters are calm, monster lings are taken past the 30-fathom line. For much of the year, the deep reefs are off limits to allow certain sensitive stocks of species like yelloweye to rebuild without fishing pressure. It’s called the Rockfish Conservation Area and it’s been pretty effective at rebuilding these sensitive stocks. From the looks of the quota so far this year, we’re nowhere near attaining the quota. Makes me wonder if we’re overestimating the abundance.

And Chinook in the nearshore? It’s about as good as it gets. For northern ports such as Garibaldi, consistent summer-time Chinook action is uncommon, unlike southern ports such as Brookings, where saltwater anglers get to work over California stocks of Chinook and structure and bait hold them close to shore. Out of Garibaldi, we’re fishing on returning adults, destined for central coast river systems (to the south of Garibaldi) like the Nestucca, Salmon, Alsea and Siletz Rivers. Those fish likely pass right by Tillamook Bay, on their way back to the natal systems. That’s what makes September pretty special.

But don’t get me started on coho. In recent years, we’ve had phenomenal opportunity for wild and hatchery coho out of Garibaldi and our local area bays and tidewater reaches. Well, there’s still opportunity this year, but we’re going to come up quite short on expectations. So much so, I wonder if we shouldn’t push for emergency action to rescind the season. Coho are a pretty good indicator as to what’s going on in Oregon’s nearshore waters. They largely rear in the nearshore waters of the Pacific Northwest while our Chinook head to the Gulf of Alaska to feed for much of their saltwater lifecycle.

Some of the largest salmon of the season return this time of year, large by today’s standards anyway. Destined largely for the Trask and Tillamook River systems, fish up to 40 pounds are still a rare catch, but at least it’s an option here.

Tillamook Bay used to be known for its “Hogs.” Not that there was any standard, but a Hog or Hawg was considered anything over 40 pounds, and those were fairly common in Tillamook Bay just 20 and 25 years ago. When I first started fishing Tillamook Bay about that time, I even knew more than one angler that caught chinook over 60 pounds!

Those fish are a thing of the past. One has to wonder, or come to the realization more likely, that our ocean DOES have a carrying capacity. Carrying capacity is defined as: the maximum, equilibrium number of organisms of a particular species that can be supported indefinitely in a given environment. So, when we talk in terms of carrying capacity of the Pacific, the question comes to mind: Are we over-harvesting the bounty that “appears” to be here?

I think the answer is pretty clear; we’re over-harvesting the ocean’s organisms. Here is a recent article that talks about the 49% worldwide decline in marine organisms. Is our nation’s management of ocean resources any better?

Given this year’s gross over-prediction of our coastal and Columbia River coho runs and an overestimate on projected harvest for a multitude of other species, we may be entering a period of under-abundance and a need for more conservative consumptive opportunities. I know, it’s pretty hard to fathom given the bounty we’re now witnessing, but it is September after all.