Top photo: Panoramic shot of the “Ghost-Town-Hole” with just 4 boats plying the waters for salmon on Sunday, October 16th, 2022

It’s as if Mother Earth knows, fall is for putting away a cache of food for the long winter ahead, and rarely does she disappoint, at least until this year.

In my 26 years as a professional fishing guide, and 34 years paying attention to fisheries in the Pacific Northwest, I’ve never seen a lack of opportunity as I have this year. Fisheries typically fueled by extraordinarily large wild fall Chinook and abundant returns of hatchery coho have been reduced to heavily restricted seasons and bag limits. It’s been the fall of minimal opportunity, impacting coastal communities all along the Pacific Coast.

For those familiar with what is likely the North Coast’s most well-known fishing spot, “The Ghost Hole,” on Tillamook Bay in Oregon, we should be seeing upwards of 50 – 60 boats in mid-October. This year, I’m dubbing the traditional hot spot the “Ghost Town Hole,” for the lack of effort and the lack of catch.

It’s a mix of the perfect storm: Cryptobia, a naturally occurring parasite prevalent during low water periods, took the lives of an estimated 50% of the spawning population in 2019, reducing the number of eggs adult Chinook produced on the spawning grounds that year, and the lasting effects of the Warm Water Blob, responsible for limiting production of cold water species in the ocean in recent years. The bigger worry may be, if we don’t get significant rain soon, we could be setting up on another disastrous repeat performance in a year where we can’t afford to lose another 50% of the returning spawning broodstock. 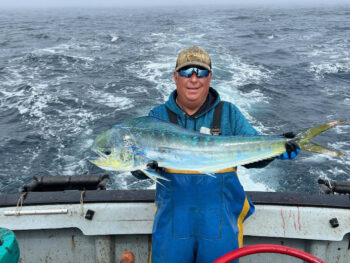 There is, of course, no way to proactively manage for these weather anomalies, especially for species that have relatively short life spans and expansive home ranges, such as our Pacific salmon. The bottomfish fishery remains stable and productive, however, and we have a good management strategy along with fish that have small home ranges, with long life histories, to thank for that.

Although the coastal communities weren’t rocked by a reduction of one fish this summer in the bottomfish limit, anglers this time of year are a bit burned out on rockfish and lingcod. We’ve been pursuing them all summer long, and this is the time of year for salmon. Salmon are typically very accessible to both bank and boat anglers as they enter these rivers en route to their spawning grounds. Under these water conditions, however, the few that are in the rivers are past their prime quality or too skittish to bite.

Thankfully, salmon are cyclical, and they will rebound when water and ocean conditions become more favorable. We don’t have that luxury with many of our groundfish stocks.

The Magnuson-Stevens Act (MSA) was a pro-active piece of legislation that has gone through several iterations of improvement before becoming the landmark law it is today. For the remainder of the year, when ocean weather allows, we can bank on more groundfish opportunities for fresh fish tacos and fish and chips.

Although conservation improvements were added to the MSA for groundfish and other stocks that crashed (due to overfishing and destruction of ocean habitat) in the mid-80’s, there are important components of the law that also impact our dynamic freshwater fisheries. Ensuring commercial interests don’t overfish forage stocks is just one key component as our regional governing body, The Pacific Fisheries Management Council, passed policy safeguarding unmanaged forage species, proactively protecting species such as Pacific saury, Pacific sandlance and a plethora of squid species, all important to our freshwater, pelagic and highly migratory species. And how about that albacore tuna harvest this year? Yes, also co-managed under MSA.

Maybe most encouraging, even during campaign season, seasoned congressional leaders still recognize the importance of forging ahead with proactive improvements to ocean and fisheries policy, in a bi-partisan fashion! Democratic Congressman Jared Huffman recently sent a letter to the National Marine Fisheries Service detailing the need to plan for climate change in our management strategies. Given the recent devastating closure of the snow crab fishery in Alaska and cut-backs in the king crab fishery as well, scientists are pointing to changes in ocean temperatures as a key culprit in the significant declines in adult biomass. Thankfully, juvenile crab surveys still promise of a rebound.

Republican Senator Lisa Murkowski is seeking input from her constituents on how to build more resilient working waterfronts. Her working waterfronts framework brings forward ideas from those in the community, seeking solutions to building a more sustainable fishing fleet through electrification of fishing vessels, surveying seaweed along Alaska’s expansive coastline (the last one was conducted by row boat), and research and monitoring of ocean acidification to name just a few of the initiatives. All important work, especially in the face of our changing ecosystems.

You’ll hear the term “Working Waterfronts” in the coming years; we’ve seen what dysfunctional waterfronts look like all too often… In the mid-1980’s, for groundfish and, right now, in the Ghost-Town Hole. The bi-partisan MSA is due for an update; let’s hope the new Congress will work together to solve the problems of the future so we all see a reduction in disaster relief checks. That’s one thing we’d all like to see go extinct.